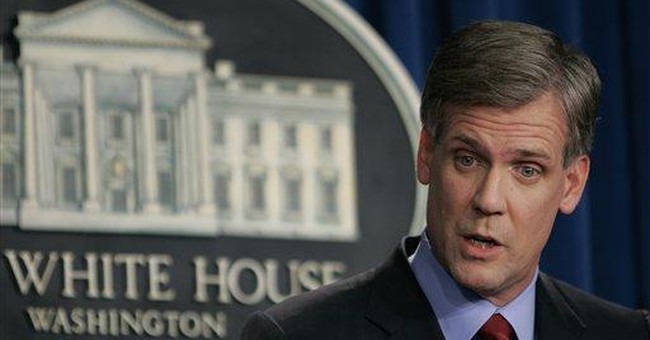 The Lord must need some good company in Heaven. Recently, Tim Russert, Jesse Helms and now Tony Snow have been called home. My pastor says that the older he becomes the more dead people he knows. Those who leave this earth as believers end up in a far better place without diseases, pain, grief and broken relationships. Tony battled cancer for a long time, but he was such an optimist, such a fighter, so courageous, so hopeful, that his death is a shock.

The one thing which characterized these three men was their love of family. I have not met Tony's wife and three children, but to know him for a brief time made me feel as if I knew his family as well. He placed them on a very high pedestal and one could not know him without hearing about his family. The same is true of Russert with his wife and son and of Jesse Helms with his wonderful wife, Dot, and his grandchildren.

Tony frequently had a smile upon his face. He always thought of others. The first sign of a person's good relationship with the Almighty is the virtue of gratitude. Tony understood that only in America could he come from relatively modest beginnings and become a widely read newspaper columnist, a syndicated radio talk show host, a nationally televised news anchor and Press Secretary to the President of the United States of America. Daily he expressed gratitude for the opportunities he had to use his God-given talent. He could not understand constant complaints about this country. He was so grateful to live here. He always said this was the greatest country on earth.

Recently, I was at a funeral at which the wife of the deceased was inconsolable. When she finally brought her emotions under control, she told me, "I'm not crying for him. I am sure he is okay. I'm crying for me. I'm stuck here without him." I was trying to figure out why I felt so poorly when I learned about Tony's untimely death early last Saturday. Then it dawned on me that I was not upset for him, even though I know he wanted to live to see his grandchildren. I was upset for myself. This world is a poorer place because Tony is no longer with us. At age 53, no less. I happened to be at the Phillips Publishing Company when it was announced that his cancer had returned and he would have to go back to the hospital immediately. Everywhere I turned people were crying. He was that loved. Even the media believed, I think correctly, that he never tried to mislead them. Moreover, while always amiable, he vigorously defended the President's policies. He was a perfect blend of toughness and fun, of feistiness and understanding.

President George H. W. Bush, for whom Tony wrote speeches, said Tony demonstrated that the political process does not have to be mean and nasty. Indeed. Roger Ailes, who hired Tony as the first host of Fox News Sunday, said he was a man of integrity and accomplished more than most. Officials of various political leanings paid tribute to Tony at the time of his death. It was more than mandatory lip service. The political community recognized that he was someone special.

Let us pray for the soul of Tony Snow, that he may be in a place where there is no pain, no grief, no sighing, only life everlasting. Memory Eternal!