The Need for a Congressional Agenda 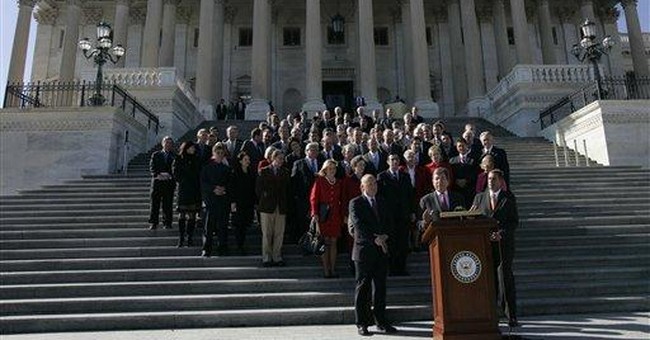 One of the things Ed Feulner and I urged conservatives in the House to do was to adduce an agenda of their own. Indeed, along the years they did so. Whether we are talking about Jack Kemp's tax cuts or Newt Gingrich's Contract with America, the Republicans did have an agenda separate from the official leadership.

After Republicans became the majority party for the first time in 40 years, conservatives left it up to the official leadership to come up with an agenda. At first that worked fine but by the time 2006 rolled around there was no real agenda except to retain the majority. House Republicans were adrift.

Not so anymore. The Republican Study Committee, under the able leadership of Representative Jeb Hensarling (R-TX), has proposed an eight-point agenda for which they hope for votes on before the present 110th Congress adjourns. The problem, of course, is they are no longer in the majority so the Democrats set the agenda and it is unlikely they will permit votes on most of these issues.

The one which probably resonates most around the nation is a moratorium on earmarks. The public is really sold on the idea that earmarks represent pork-barrel spending. In that connection RCS has proposed limiting Federal taxing and spending to what middle class families can afford.

Not surprising, RSC is proposing a simple tax code which Americans can understand. I take that proposal less seriously since every party in every election in my memory has promised the same thing and yet the tax code becomes more complex.

The agenda also calls for energy independence through increased exploration. Congress has been beating up on oil companies because of the high cost of gasoline. Some energy companies bravely have pointed out that it is Congress which has prevented exploration. We have more than enough oil. We simply have not been permitted to drill for it.

Hensarling, in announcing the agenda, called for the development of a legal framework which allows the United States to prevent terrorist attacks.

Social-issue conservatives are attracted to the provision which calls for a moral approach for parents to protect and educate their children. This includes parental notification for minors who want an abortion and parental control over the family's personal educational decisions.

Finally, RSC calls for a welfare safety net which fosters marriage and work. Work requirements would be extended to food stamps and housing and encouraging parents to marry so that their children can be reared in two-parent homes. This agenda probably has somewhere between 70 to 80% support in the country. But school prayer always had that kind of percentage and there has only been one vote in the past 45 years.

One can hope now that the official GOP Leadership in the House will adopt and push this agenda. These issues are far better than anything we have heard out of Congress for several years.