Is Congress Dangerously Gambling with Gambling? 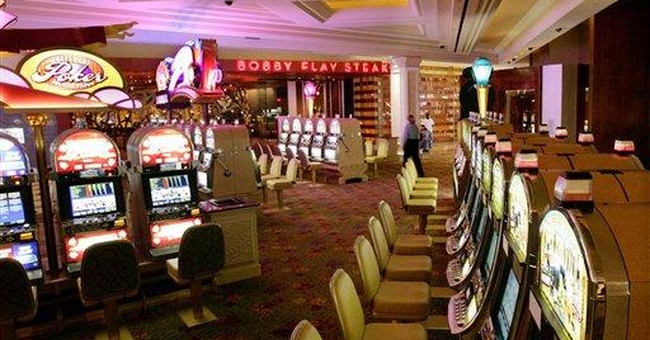 Richard Cumberland, Bishop of Peterborough and 17th-century English philosopher, wrote, "Games of chance are traps to catch school boy novices and gaping country squires, who begin with a guinea and end with a mortgage." Now, of course, gambling ensnares far more than young boys and amazed country-folk but the effects remain the same. It is a particularly destructive addiction, falsely leading people to believe that if they just bet on one more game they will turn a profit. In reality, many destroy their finances, their marriages and their lives.

Recognizing the destructive nature of gambling, Congress enacted anti-gambling regulations in late 2006. The regulations were intended to curb online gambling by requiring banks and credit-card companies to block payments by Americans to overseas Internet gambling sites. Two years later the Department of the Treasury still is trying to devise a way to implement the law.

In the meantime, gambling interests have come back with a vengeance. ROLL CALL Newspaper reports that last year the Poker Players Alliance spent $900,000 for the services of former Senator Alfonse D'Amato (R-NY), its chief lobbyist, while the Interactive Gaming Council paid $1.28 million and Party-Gaming $1.69 million for lobbyists from more than eight separate firms.

More importantly, advocates of online gambling have the support of key Members of the House of Representatives. House Financial Services Chairman Barney Frank (D-MA) has introduced H.R. 2406 to repeal the ban and decriminalize online gambling by creating an "Internet Gambling Licensing Program." According to ROLL CALL, Frank and Representative Peter King (R-NY), a high-ranking Member of the Committee who also supports a repeal, recently sent a letter to their colleagues asking them to endorse the legislation. In response, Representative George Miller (D-CA), a leading Member of the House, agreed to co-sponsor it. Also, last week the Subcommittee on Domestic and International Monetary Policy, Trade and Technology held a hearing on whether the regulations offer "burden without benefit." The consensus among lawmakers on the House Financial Services Committee is that they do.

One may wonder why there is such a push to legalize a destructive behavior. The primary reason appears to be money. Democrats, who currently control Congress, are operating under pay-as-one-goes budget rules. Representative James McDermott (D-WA) has introduced H.R. 5523 to "regulate and tax Internet gambling." McDermott estimates the tax will generate anywhere from $3.1 billion to $15.2 billion in its first five years.

One of the ironies in all of this is that Frank is a co-sponsor of H.R. 1170, the Comprehensive Awareness of Problem Gambling Act of 2007, of which the stated purpose is to "address problem gambling" by requiring "the Secretary of Health and Human Services to carry out a national campaign to increase knowledge and raise awareness of problem gambling." Clearly, then, Frank recognizes what a destructive social behavior gambling is. Yet he appears to be determined to enact legislation to legalize it.

The purpose of law in human society is, among other things, to "promote the general welfare" of society, as the United States Constitution duly notes in its Preamble. It appears that Congress has removed itself from such a role. Instead, our elected officials have come to value tax dollars higher than a healthy society. Of course, such revenue then can be used to fund beloved social programs which deprive individuals of their self-respect and independence but provide lawmakers with solid voting blocs intent on keeping the "free" cash flowing their way.

These gambling measures should be opposed vigorously by all American citizens concerned about maintaining healthy communities. If we did not we would share the responsibility for the financial and relational destruction that so frequently occurs in gambling's wake.