WWI and the Second Fall of Man 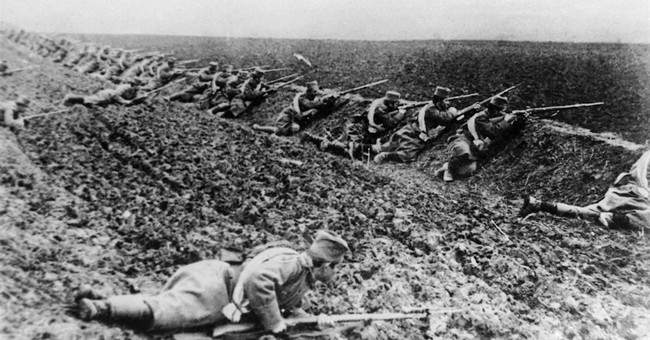 On June 28, 1914, a Bosnian-Serb student named Gavrilo Princip killed Austrian archduke Franz Ferdinand and his wife, the duchess. It was the shot-heard-round-the-world, unleashing a series of events that by August 1914 embroiled Europe in war. That deadly summer unfolded 100 years ago, and the world truly was never the same.

Civilization was soon engaged in a horrific conflict marred by mechanized warfare previously unimaginable: tanks, subs, battleships, air power, machine guns with names like “the Devil’s paint brush,” and legions of poison gas—the largest-scale use of chemical weapons in history. Winding through all the agony were rotten, death-strewn trenches, an incomprehensible maze of thousands of miles of freezing, disease-ridden, and rat-infested tunnels where men subsisted below the earth. They rose from this hell only to be fed into a worse one—no man’s land, a dénouement with the human meat-grinder.

Ever since, professors have struggled to explain to students how the major powers became engulfed by this nightmare. I start my lectures on WWI with an hour on its causes. These ranged from colonial and tariff disputes to a complicated network of alliances that inexorably committed various countries to battle, beginning with Austria-Hungary, Serbia, Germany, and Russia.

Still, as I cover these causes with my students, they are confused, frustrated, unsatisfied. Where was the Pearl Harbor? Where were the concentration camps? Where was the Hitler-Stalin Pact? Who was the brutal dictator?

There was none. No such blatant evils precipitated this war.

It was a disastrously wasteful affair that Pope Benedict XV publicly declared an unjust war, a mad form of collective European suicide. The pontiff rightly judged that there were no salient moral issues dividing the combatants. These countries should not have been at war, let alone slaughtering their boys by the millions.

The moral calamity was obvious to all. Quite apart from the bishop of Rome, the acclaimed atheist-leftist intellectual Sidney Hook might have best summed up the catastrophe when he referred to World War I not as the “Great War,” or “War to End All Wars,” or the “Kaiser’s War,” or, in PresidentWoodrow Wilson’s famous line, the war to “make the world safe for democracy,” but as something considerably less inspiring: World War I was, said Hook mordantly, “the second fall of man.”

And so it was.

Religious metaphor best captures the gravity of this giant fall from grace. Historian Michael Hull evokes the image of O Cristo das Trincheiras, “The Christ of the Trenches.” This life-size statue of Jesus Christ hung with arms outstretched on a tall wooden cross was erected on the Western Front. Soiled, bullet-scarred, and, most of all, crucified, the French presented it to the government of Portugal after the war to memorialize the thousands of Portuguese who sacrificed themselves at the Battle of Flanders. It’s an appropriate symbol for the millions who gave their lives for this colossal sin.

Michael Hull maintains that World War I was, in a perverse way, arguably more horrible than World War II. How so? “The horrors of World War I,” writes Hull, “exceeded those of World War II in terms of the sheer futility of squandered lives.”

Here’s what the modern world should know about World War I: This wretched war, whose reasons still baffle, enabled Hitler in Germany and the Bolshevik Revolution in Russia. It helped lead to World War II and the Cold War. The famous British historian A.J.P. Taylor put it plainly, “The first war explains the second and, in fact, caused it, in so far as one event causes another.”

The bloody disaster would be a mere warm-up, the first of two worldwide wars, fostered by the “punitive peace” imposed upon the surrendering Germans at the unforgiving hands of the French and other Allied leaders at the Versailles Conference. That punishing peace did not produce a peaceful heart among the Germans, many of which mistakenly believed they had won the war and surrendered only to agree to acceptable conditions of peace. Instead, the conditions at Versailles helped sow the seeds for Hitler’s rise.

The war not only permitted the cataclysm in Germany; it also enabled the fall of Czar Nicholas II in Russia. It’s difficult to imagine the Bolsheviks supplanting the Romanov dynasty without the intervention of WWI.

Ultimately, World War II far surpassed World War I’s carnage, and the Soviet global communist ideology killed even more still; both precipitated by a “Great War” in which no great moral issues were at stake.

World War I unleashed death, principally death. It was a result that Mr. Princip could have never imagined when he pulled that trigger 100 years ago.