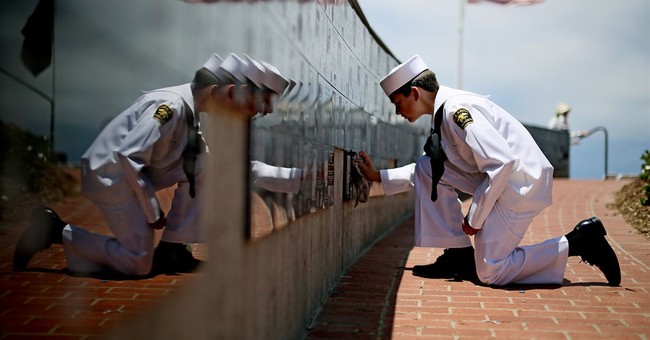 Every Memorial Day I attend a parade in the little town of Mercer, Pennsylvania. It’s pure Americana: flags, kids, the snow-cone stand, marching bands, local clubs and rotaries, and veterans of wars past processing down the street.

Every year, one exhibit always strikes me: a car with a placard announcing the “Five Bailey Brothers.” The mere name always gives me a good feeling: Bailey. It reminds me of “George Bailey,” played by Jimmy Stewart in “It’s a Wonderful Life.” That movie, of course, has a happy ending—and so does the story of the Bailey brothers.

After years of watching the Bailey car coast by, I finally took the time to track down the last surviving Bailey brother: Richard, or “Dick.” I was pleasantly surprised to learn he happens to live in my town.

Born on Christmas Eve 1922, Dick Bailey was one of five brothers who served in World War II. That’s right, five. You’ve heard of the Ryan brothers in “Saving Private Ryan” and perhaps the Sullivan brothers in the old black-and-white “The Fighting Sullivans.” And you know from these movies that the U.S. military resolved to never again have so many brothers serve in one war. The loss of one is hard enough for a mom and dad. To lose two, three, four, or, incredibly, five … would be staggering, seemingly un-survivable for a parent.

Nonetheless, there they were, all five Bailey boys: Dick, Jim, Fonnie, John, and Fred. Surely, some were protected with a desk job on the home-front? No, all five were dispatched into enemy territory.

“All had combat,” says Dick.

All volunteered for combat after Pearl Harbor, and all faced it—Europe, the Pacific, Northern Africa; by land, by air, by sea.

One of them, Fred, was shot and taken prisoner by the Nazis. “The Germans didn’t treat him well,” said Dick. “Fred said it was horrible…. He was only 110 pounds when he came home.”

Dick was in the Army Air Corps. He and his brother John were in the war the longest. He served on six islands in the Pacific, including the Philippines. In the Schouten Islands, the Japanese bombed almost every night, late at night, typically two hours at a time, throughout Dick’s eight-month stay. “You didn’t sleep very much,” says Dick in his typical understated way.

No time off whatsoever.

I asked Dick about the moment he finally got home. He said it was the winter of 1946, a blustery January day. For weeks, he had travelled from the other side of the earth only to encounter a terrific snow-storm as he neared Western Pennsylvania.

He took the train from Pittsburgh to Grove City. Unbeknownst to Dick, his parents had moved to the nearby little town of Harrisville, just down the road. Because of the weather and other obstacles, Dick arrived very late and ended up consigned to a 24-hour diner, held captive by no transportation and a foot-and-a-half of snow. His parents had no idea he was en route home. Amazingly, they hadn’t heard from him in years, and he hadn’t heard from them—such were the dreadful lines of communication and secrecy. In fact, Dick hadn’t been in touch with his brothers either. For all he knew, they might all be dead.

Dick had no idea of his parents’ address. At the diner, he saw an old buddy, who told him where his parents were living. With this useful new information, Dick made his way home. He showed up at his parents’ house at 5:00 A.M. and knocked. His half-asleep mother scurried to the door and saw her son for the first time in four years. She cried. He cried.

Dick’s parents then informed him of something he was yearning to know: All of his brothers had survived the war. Yes, all five. He was the last one they were waiting to hear from.

Unfortunately, all of Dick’s brothers now lived elsewhere, two of them newlyweds. His two sisters had also gotten married. In 1942, he had left a happy home of nine people. The war had emptied the Bailey household.

But now, all Bailey boys were “home” regardless; they were alive.

The war had been “quite an experience,” Dick says today. Asked if he would do it over again, he smiles and says, “as long as I came back alive.”

Dick and all his brothers did just that.

How can we honor them today? We can honor them by not destroying the America they were willing to sacrifice everything for.