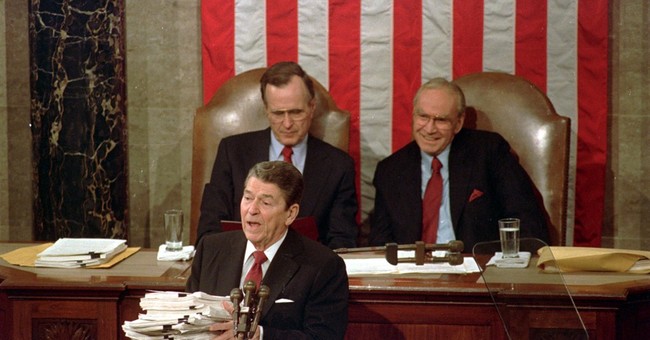 Editor’s note: The following is an excerpt from Paul Kengor’s new book 11 Principles of a Reagan Conservative. Among the principles is faith. A version of this article first appeared at RealClearReligion.org.

Freedom. Freedom. Freedom. Go to any gathering of conservatives, and you will hear a freedom mantra. They speak of “freedom” almost as if it were a one-word synonym for conservatism, a slogan for the movement. At times, they do so in an almost trite way.

Ronald Reagan likewise spoke constantly of freedom. Mankind, from “the swamps to the stars,” as he said in his seminal October 1964 “Time for Choosing” speech, longed to be free. The global Cold War struggle of Reagan’s life represented the arc of that longing, of that crisis. Obviously, the communist world hungered for freedom. But even the free world didn’t always appreciate it. Free people needed always to be reminded of their freedom and the need to understand and reassert it. That included Americans. Reagan said that freedom is always under assault; every generation must fight to preserve it.

Yet, in truth, as Reagan understood, to invoke freedom alone is a mistake. Freedom by itself, isolated, is libertarianism, not conservatism. For the conservative, freedom requires faith; it should never be decoupled from faith. Freedom not rooted in faith can lead to moral anarchy, which, in turn, creates social and cultural chaos. Freedom without faith is the Las Vegas Strip, not the City of God. Freedom without faith begets license, and invites vice rather than virtue. Faith infuses the soul with a sanctifying grace that allows humans in a free society to love and serve their neighbors, to think about more than themselves. We aspire to our better angels when our faith nurtures and elevates our free will.

Genuine freedom—and certainly the Christian conception of freedom—is not license. To a practicing Christian, freedom cannot be practiced without faith. As noted by Pope John Paul II, with whom Reagan had an excellent relationship of strong mutual respect and collaboration, without the rock and rudder of faith, freedom can become confused, perverse, and can even lead to the destruction of freedom for others. John Paul II’s successor, Pope Benedict XVI, said that the West suffers from a “confused ideology of freedom,” one that has unleashed a modern “dictatorship of relativism.”

In the New Testament, Galatians 5:13-14 states: “For you were called for freedom, brothers. But do not use your freedom as opportunities for the flesh; rather, serve one another through love. For the whole law is fulfilled in one statement, namely, ‘You shall love your neighbor as yourself.’”

The great conservative thinker Russell Kirk, in his 1974 classic, The Roots of American Order, spoke of “ordered liberty.” Kirk talked of the need for “inner order” by American citizens before they and their countrymen and country could successfully govern through “outer order.” Ordering ourselves internally was critical to the nation’s external order. The nation’s first president, George Washington, argued the same, stressing the need for citizens to self-govern themselves before they could self-govern their nation.

Without faith to steer our freedom, we can become reckless. We can become lost amid the waves of the culture and tumult of the times. We can become what G.K. Chesterton called mere “children of our age,” succumbing to whatever new dictates or fancies the cultural zeitgeist serves up for the day. We are a people who need God.

Ronald Reagan believed this wholeheartedly. He felt that God provided the route to goodness and wisdom; only through reliance in Divine Providence could America’s leaders achieve goodness and wisdom. One of Reagan’s favorite images was that of George Washington kneeling in the snow in prayer at Valley Forge, which Reagan called the “most sublime image in American history.” Washington kneeling in prayer, said Reagan in a radio address in December 1983, “personified a people who knew it was not enough to depend on their own courage and goodness; they must also seek help from God, their Father and their Preserver.”

It was God, Reagan maintained, “from whom all knowledge springs.” “When we open ourselves to Him,” Reagan told a group of public-school students, “we gain not only moral courage but also intellectual strength.” The light of faith enlightens the intellect and our reason. Reagan had expressed this sentiment for years, long before the presidency.

Such a divine source, Reagan reckoned, ought to be tapped.

Quite the contrary, Reagan was earnestly afraid of what happens to free, democratic societies when they scrap religious faith. To that end, one of Reagan’s best speeches, and arguably one of the most forgotten, was an October 1988 address marking the bicentennial of Georgetown University. “At its full flowering, freedom is the first principle of society; this society, Western society,” Reagan told students at Georgetown. “And yet freedom cannot exist alone. And that’s why the theme for your bicentennial is so very apt: learning, faith, and freedom. Each reinforces the others, each makes the others possible. For what are they without each other?”

He asked his audience to pray that America be guided by learning, faith, and freedom. He quoted Alexis de Tocqueville, author of the 19th century classic, Democracy in America: “Tocqueville said it in 1835, and it’s as true today as it was then: ‘Despotism may govern without faith, but liberty cannot. Religion is more needed in democratic societies than in any other.’” With a nod to his academic audience, Reagan warned, “Learning is a good thing, but unless it’s tempered by faith and a love of freedom, it can be very dangerous indeed. The names of many intellectuals are recorded on the rolls of infamy, from Robespierre to Lenin to Ho Chi Minh to Pol Pot.”

Reagan contended that one thing that “must never change” for America is that men and women must “seek Divine guidance in the policies of their government and the promulgation of their laws.” They must, he urged, “make our laws and government not only a model to mankind, but a testament to the wisdom and mercy of God.”

Conservatives today quote a particular Reagan remark on freedom: “Freedom is never more than a generation from extinction…. It must be fought for, protected, and handed on.” So popular is this Reagan quotation that I own a coffee mug from a conservative organization with those words etched into the ceramic. Yes, Reagan said those words, and agreed with them, but Reagan did not want those generations fighting that fight without the shepherd of faith. Despots might attempt to govern without faith, but Americans should not. Faith and freedom reinforce one another, each making the other possible.

Reagan felt that learning was about learning this crucial relationship. It is telling that many of these Reagan remarks on the bond between faith and freedom were shared with students; that is, with those engaged in the process of learning. So, too, learning about and understanding conservatism—especially Reagan conservatism—is about knowing this reinforcing relationship.

More, learning about and understanding America, too, was about knowing this relationship. It is the “twin beacons of faith and freedom,” proclaimed Reagan, that have “brightened the American sky.”

And finally, to learn about and understand conservatism is to understand that both faith and freedom—not one of the two, but both—form its bedrock. They were the rudder that navigated Ronald Reagan through the tumult of his times and should likewise continue to guide conservatives today.