Paul Jacob
|
Posted: Aug 26, 2018 12:01 AM
Share   Tweet
The opinions expressed by columnists are their own and do not necessarily represent the views of Townhall.com. 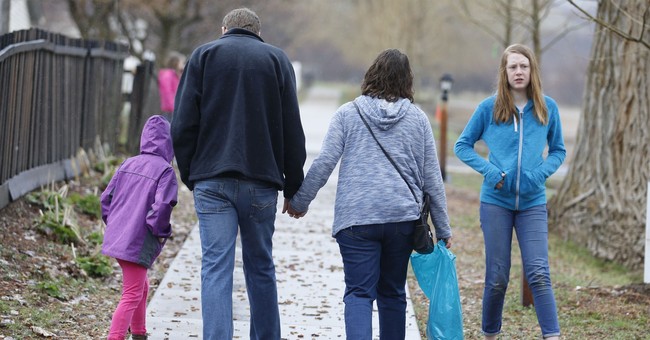 “Think of the children!”

I have daughters. And neighbors, nephews, nieces, cousins, friends with children. And friends who used to be children. Some who maybe still are.

But when the command to “think of the children” is screamed aloud by freaked-out paranoiacs demanding more laws, more punishments, more prison time, more surveillance — and consequently less freedom — I try to remain calm and think responsibly.

As did one Corey Widen, when she “let her 8-year-old do the most normal, cheerful thing in the world — walk the dog around the block.” Lenore Skenazy tells the tale in Reason. “After the girl returned home, the doorbell rang. It was the police.”

Someone in Widen’s Wilmette, Illinois, community had seen the child and dog walking around “unsupervised” and called 911.

The thing, there was no lack of supervision here. The child was supervising the dog.

What could be more natural?

The neighbor could have walked outside and smiled at the kid and talked about the dog and, in general, been a good neighbor.

Think of it as a peaceful order of supervision.

Instead: in came the police.

Then, after the police let it go, in stepped the Department of Children and Family Services to “investigate.”

Because nothing says DANGER more than a kid walking a dog.

Ms. Skenazy notes that this attitude is commonly justified by crimes against kids. And yet, she shows, crime in Wilmette has gone down dramatically over the years. As it has most everywhere.

Regular readers of this column or my Common Sense e-lettermay recall my numerous defenses of the Meitiv parents against the absurd charge of “unsubstantiated neglect” leveled against them by Montgomery County (Maryland) Child Protective Services. Their 10- and 6-year old were picked up by police and detained for five hours in 2015 for walking home “unsupervised” from a local park. The folks at Child Protective Services threatened to take the children away from Danielle and Alexander Meitiv.

With court battles ensuing and ample media attention, the head of Maryland’s Social Services Administration finally released a memo to staff acknowledging in creepy bureaucratic fashion that, “Children playing outside or walking unsupervised does not meet the criteria for a CPS response absent specific information supporting the conclusion that the child has been harmed or is at substantial risk of harm if they continue to be unsupervised.”

So, technically, officially, for the moment and hopefully the future, “playing outside” and “walking unsupervised” have been legalized for young people in Maryland . . . The Free State.

Earlier this year, the Utah Legislature enacted legislation exempting certain activities from a state law criminalizing child neglect. Now, children may legally “walk, run or bike to and from school, travel to commercial or recreational facilities, play outside and remain at home unattended” — thereby allowing “a child, whose basic needs are met and who is of sufficient age and maturity to avoid harm or unreasonable risk of harm, to engage in independent activities . . .”

Ah, the anarchy of our bygone days, when we did these things completely oblivious to the need for legal protection from the government officials sworn to protect us.

Still, there seems to be more than just media-juiced paranoia at work. When I was a child, no one suggested my mere presence on the planet was a problem. A curse.

Should children be only seen and not heard? I wonder if there isn’t a strong constituency in America today for not seeing them too much, either.

But who is served by this basic anti-children mindset — coupled with the paranoia and hysterical over-protection?

A society unwelcome to children is a society busily dying.