Paul Jacob
|
Posted: Mar 25, 2018 12:01 AM
Share   Tweet
The opinions expressed by columnists are their own and do not necessarily represent the views of Townhall.com. 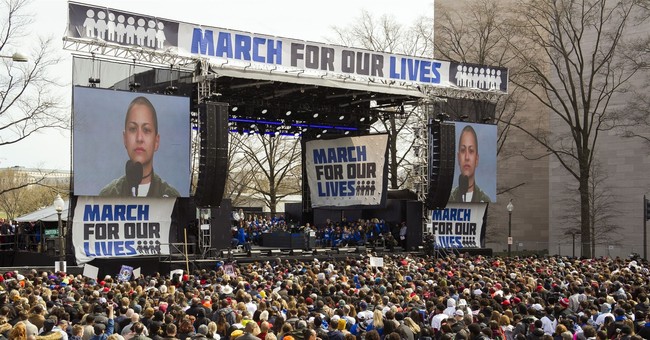 Yesterday, hundreds of thousands of Americans, many of them young students, demonstrated against “gun-violence” by participating in the March for Our Lives in Washington, D.C., and around the country.

Not me. I stayed home and wrote this column, instead.

And not to disparage the efforts of all those marching, but to affirm my own, I hope and believe I will have ultimately advanced the cause of peace and freedom to a greater degree.

Freedom? It’s a word not used enough in this debate. After all, without freedom, peace is merely slavery.

This last point is sadly lost on the marchers. The media. The public schools.

And it’s completely ignored by the political leaders (I use that word loosely) who are hoping these sympathetic and articulate youngsters will be the extra energy needed to win power for Democrats and advance their partisan political agenda of ever-bigger government.

In MSNBC’s coverage of the event, U.S. Sen. Amy Klobuchar told viewers that no hunter needs an AR-15, seemingly oblivious to the fact that the Second Amendment wasn’t written as an ode to hunters and sportsmen. But of course, where would young students learn the historical underpinnings of “the right to keep and bear arms"?

Perhaps at home. But certainly not at school.

The government schools have long engaged — unethically and often illegally — in partisan political activity. After the school shooting last month in Parkland, Florida, however, the public education system has dropped any pretense of objectivity and balance, launching a high-profile political campaign with their students (other people’s children) as both props and participants.

Some might argue they are merely facilitating the political aspirations of their students. Funny. Very funny.

Teachers would be summarily fired if, instead of agitating to ban guns, they were arguing to ban abortion. Or even facilitating their students protest against abortion. Everyone knows this is true. And every reasonable person knows it is indefensible.

In fact, even noticing and voicing concerns about the huge political double-standard animating the public school system has led to teachers — such as Julianne Benzel of Rocklin High School in California — being yanked out of their classrooms.

As if to prove my prior point, one person in attendance asked, “What is the Second Amendment?”

Was the congressman advocating violence? That characterization of his remarks was denied, but the campaign, as New York Magazine put it, “seemed to double down on the comments,” releasing a quote by Thomas Jefferson.

“What country can preserve its liberties if their rulers are not warned from time to time that their people preserve the spirit of resistance,” wrote the author of the Declaration of Independence. “Let them take arms.”

The Second Amendment is indeed a bulwark against political oppression. Not through never-ending gun battles in the streets — whether that was what the congressman had in mind or not. Instead, when the populace is armed sufficiently to realistically repel tyranny, the calculations of self-interested politicians per what they can get away with changes.

Without a shot ever being fired.

If the Chinese people were as well armed as the American people, the 1989 Tiananmen Square protests would have ended differently. Dissidents languishing in prison today would be free, instead.

There have been no school shootings in North Korea. Nary a one.

I’ll keep the Second Amendment. Yet, I understand the frustration of the student survivors of the shooting that stole 17 lives at Marjory Stoneman Douglas High School in Florida. When senior Emma Gonzalez said, “We call BS,” she touched on a very legitimate concern that their lives have not been prioritized.

Instead of making schools into tougher targets, by arming teachers willing to be armed and/or providing a serious police presence, a Washington Post editorial notes that, “Active-shooter drills have become a macabre part of the school routine, with children as young as 4 trained to recognize the sound of gunfire and to hide in closets and bathrooms.”

Wait a second . . . just last week, a good guy with a gun at a Maryland high school stopped a bad guy with a gun. In less than a minute. How? The good guy had a gun and was inside the school with the gun.

The bad guy was able to shoot a 16-year-old female student, who has now been removed from life-support, as well as a 14-year-old male, who is in stable condition, before an officer on site responded. But that officer, Blaine Gaskill, was on the spot in less than a minute. Gaskill and the assailant fired simultaneously, and the assailant fell dead.

Yet, in all the coverage of yesterday’s mass protests, this story seems to have fallen down the memory hole. Not one speaker mentioned the hero’s name.

“But relief that more people weren’t hurt or killed doesn’t diminish the horror of what happened in that school corridor,” argued the Post editorial board. “Nor does it minimize the threat that is posed by gun violence, or the damage done.”

Killing the murderer does, however, “minimize the threat.” And the knowledge that instead of gun-free zones, schools can and will defend their students is a massive and serious step toward diminishing the likelihood of future attacks.

“No other community should have to learn what St. Mary’s learned,” concluded the editorial. The paper could not be more mistaken.

No other community should have to go through the horrors of a school shooting. But if they do, let us hope and pray they learn the lesson that a good guy with a gun is the only sure-fire way to stop a bad guy with a gun.

Let’s defend our loved ones.