In Case You Missed It

Paul Jacob
|
Posted: Oct 01, 2017 12:01 AM
Share   Tweet
The opinions expressed by columnists are their own and do not necessarily represent the views of Townhall.com. 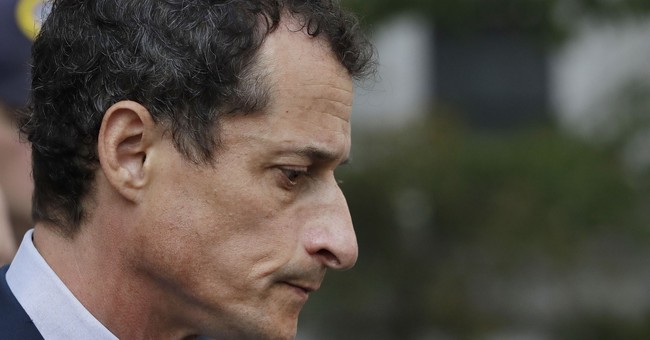 Tucked into the “In Case You Missed It” feature of yesterday’s Washington Post was a little item noting that last week former Congressman Anthony Weiner (D-NY) had been sentenced to 21 months in federal prison for sexting with an underage girl. Weiner must also pay a $10,000 fine and register as a sex offender.

I wonder why it occurred to the professionals at the Post that readers may not have found that information in the paper. Was it not prominently enough placed?

Weiner is thoroughly newsworthy, after all. He was a regular TV face of the Democrats in Congress until a sexting scandal derailed his political career. Weiner tweeted — publicly, not privately — a picture of his underwear-clad crotch to a woman who was not his wife. Once it was discovered, Weiner claimed his Twitter account had been hacked. When the late Andrew Breitbart called him on his dishonesty, commandeering the stage and microphone at a New York City news conference called (but abandoned) by Weiner, the truth of the entire despicable charade spilled forth.

The embarrassing details and Weiner’s initial dishonesty in lying about the scandal left him so unpopular and distrusted that even congressional Dems wanted him out. With no plausible path to stay in power, Weiner resigned his congressional seat.

Still, two years later, Weiner attempted a comeback run to become mayor of New York City. It failed to catch fire... well, until he crashed and burned after new evidence demonstrated his prurient sexting to be robustly ongoing.

That Weiner was such a total schmuck — he admitted to have been engaged in online debauchery with 19 other women during his illegal contact with the 15-year-old — makes his precipitous fall a compelling human-interest story. That his then-wife and now estranged wife (seeking a divorce), Huma Abedin, was a close aide to Hillary Clinton, added another dimension to the tawdry tale.

Ultimately, Weiner stumbled into the very epicenter of the most critical moment — er, debacle — of last year's presidential campaign. Remember, it was the investigation of Weiner for sexting with the underage female that led the FBI to seize his laptop, on which they discovered copies of emails between his wife, Huma, and Hillary Clinton. Which of course led to then-FBI Director James Comey’s public announcement just 10 days before the election that the Bureau was reopening the investigation of Mrs. Clinton’s “damn emails.”

Oh, no, the Post didn’t want this tidbit to escape your attention. In case it did.

Maybe, under the very same “In Case You Missed It” news banner, we will soon read more about the ongoing corruption trial of Sen. Bob Menendez (D-NJ), which has also predictably failed to garner the coverage afforded to the prosecutions of other (read: Republican) politicians.

It also strikes me as odd that so many recent articles about Antifa — the violent, socialist, self-described anarchists who can’t wait to beat down fascists or non-fascists (whom they simply re-label as fascists when the mood strikes) — acknowledge that readers may be totally unfamiliar with the group. How is that possible?

Antifa was involved in both flagrant property destruction and numerous physical assaults on Trump supporters (and police) during January’s wall-to-wall coverage of the presidential inauguration. Soon, the group followed that East Coast performance by smashing up buildings on the Left Coast in Berkeley, California, again assaulting innocent people and “shutting down” a scheduled public address at the university by Milo Yiannopoulos.

Fox News viewers, consumers of conservative news and opinion publications and readers of this column were well informed about Antifa many months ago. Why was this phenomenon afforded so little mainstream media coverage?

Do such conspicuous acts of political violence not warrant attention?

It wasn’t until after the violent and deadly clashes in Charlottesville, when many big media outlets were busy blasting President Trump for the “false equivalency” of calling out both sides — Nazi thug-types and violent, leftwing Antifa activists — that those outlets finally deemed it necessary to inform citizens about the violence that had been occurring on the Left.

Thanks for the “In Case You Missed It” features. Sorta. Not.