Paul Jacob
|
Posted: Mar 05, 2017 12:01 AM
Share   Tweet
The opinions expressed by columnists are their own and do not necessarily represent the views of Townhall.com. 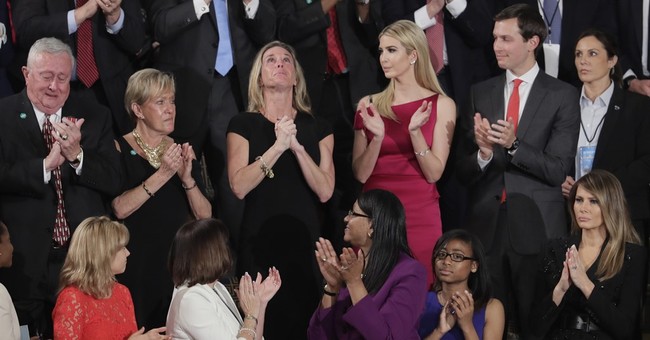 For nearly two minutes during President Trump’s address before Congress last week, the assembled members of the U.S. House and Senate stood and thunderously applauded Carryn Owens, the widow of Navy SEAL William “Ryan” Owens, who was killed January 28 in a U.S. military operation in Yemen.

“Ryan died as he lived: a warrior, and a hero — battling against terrorism and securing our nation,” the president proclaimed. “Ryan’s legacy is etched into eternity. Thank you.”

It was a very touching moment, especially as one could see Carryn Owens mouth “I love you, baby,” as she looked heavenwards.

Noting the sustained ovation, Mr. Trump added, “Ryan is looking down right now, you know that, and he’s very happy, because I think he just broke a record.”

Had the entirety of the American people been in the House chamber that evening, the applause would have lasted even longer. And yet, at the same time, I found myself disgusted by the spectacle.

Not that President Trump was using this family’s pain and suffering for a photo op, though of course he was. It was his oration’s most powerful punch. But the administration had asked Mrs. Owens if it would be alright with her to raise the issue in the speech and she reportedly said, “I’d like that.”

And her husband’s courage and commitment certainly deserve the recognition.

This president is also not the first to showcase a wounded soldier — or the family of soldiers killed in combat. President Obama did likewise and so have previous presidents in one form or another.

Oh, the politicization of it did bother me — this time and all the others, too. But what struck me so deeply was something else. It was that the president, Congress, the media, and even the rest of us, millions of regular folks, were having a feel-good moment — that was thoroughly undeserved.

None of us want a child of ours to be “etched into eternity” in this manner.

And yet our moments of appreciation for service are brief, and we go about our lives far too oblivious to what is happening in our name all over the world. Daily we ignore the plight of people — American and otherwise — who actually pay the price, sometimes the ultimate price, for our policies.

At least presidents are forced to meet the families of the fallen and confront their pain. I wish they spent more time with military families and less with their national security advisors, since, unfortunately, that seems to be the only check on their war-making prerogatives. In recent times, commanders-in-chief have launched attacks without any real justification per the defense of the United States. Libya, for instance. And they invade countries without any coherent plan for getting out and returning our sons and daughters back home as safely and quickly as possible. Or seemingly . . . ever. Iraq, for starters.

And these foreign adventures come with disastrous collateral damage.

As for the bozos in Congress, whose highest use seems to be as high-paid clappers at presidential orations, I think we have a right to expect more. Folks in Congress should actually do their job.

Congressional Job One is to hold the executive power to account, to prevent unnecessary wars by saying, “No”; and, when a war is necessary, to make certain there is a plan to win and to bring our troops back to their homes as safely and as quickly as possible.

And that we pay for those wars. Not leave the tab for our grandchildren to cover.

“Why at this time did there have to be this stupid mission,” asked Ryan Owens’s father, also a veteran, “when it wasn’t even barely a week into his administration? Why? For two years prior, there were no boots on the ground in Yemen — everything was missiles and drones — because there was not a target worth one American life.”

He’s obviously grieving. He is not against our being over there bombing “the sh*t” out of the folks in Yemen; he is merely against this raid and boots on the ground — especially his son’s.

In the president’s Owens family moment, Donald Trump addressed the question: “I just spoke to our great General Mattis, just now, who reconfirmed that, and I quote, ‘Ryan was a part of a highly successful raid that generated large amounts of vital intelligence that will lead to many more victories in the future against our enemies.’”

But Owens senior does ask the operative question: Is what we’re doing really worth a single American life?

Unlike the elder Owens, I am against us being over there bombing and killing Yemenis. I question our being engaged in bombing and drone strikes and raids by special forces in Somalia and Libya and elsewhere. And I wonder where the plan is to ever extricate our soldiers from Iraq and Afghanistan, our nation’s longest war.

Some will argue that we have to fight the terrorists over there.

I ask simply: Forever? What if we left the Middle East to fight its own civil wars? Would the terrorists then have more or less reason to try to attack America?

I’m disturbed that we can wage war in so many countries that it is difficult to keep track of them all. That our wars aren’t even front-page news anymore — perhaps just a short piece on page A10.

Why not more debate, or any, on the floor of our House and Senate?

Virtually every congressman declares the Islamic State an existential threat, yet these chicken-hawks can’t be bothered to debate and pass an Authorization for the Use of Military Force.

The Empire is on autopilot.

And why not more debate at the water-cooler and on Facebook?

We can clap. But is that all? No. We should take control of our government, making certain that not one American man or woman at arms is killed or maimed or forced to live through hell, when our national defense does not require it.

Ryan Owens and his widow and her three now fatherless children deserve more than applause.