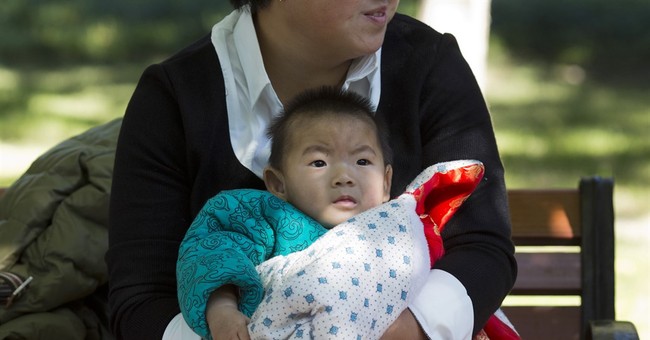 The vast majority of Chinese people are celebrating. The 18th Central Committee of the Chinese Communist Party has officially decreed it will cease enforcing the one-child-only policy this coming March — after 35 years — as part of its 13th Five Year Plan.

Just speaking for myself, the triple whammy of infanticide, coerced abortions and forced sterilizations seem . . . well, not good. Bad, even. Really bad. Or more precisely, the policy is undeniably evil, tyrannical, totalitarian . . . you know, if I were to employ such “harsh” and “extreme” language.

But not everyone sees it my way.

Back in 1990, Molly Yard claimed that “[t]he Chinese government doesn’t coerce people.” Why, according to this former head of the National Organization of Women, “the only responsible policy [China] can have is to control family planning.” She went all the way: “I consider the Chinese government’s policy among the most intelligent in the world.”

Thus, Ms. Yard wholeheartedly endorsed state control of every Chinese woman’s reproductive organs, even while simultaneously, and vociferously, opposing all U.S. attempts to restrict abortion as unconscionably giving the state control over a woman’s reproductive organs. As for government coercion, a recent National Geographic report tells the story of a Chinese woman, now living in America, who acknowledged personally participating as a government official in over 1,500 forced abortions, most of them late term.

Vice-President Biden was seemingly apologetic for even bringing up the subject in a 2011 speech at Sichuan University. “Your policy has been one, which I fully understand — I’m not second-guessing — of one child per family,” he told the audience, before noting that, from the pragmatic standpoint of providing retirement benefits, the policy was “not sustainable.”

In 2012, the Los Angeles Times informed readers that “by many measures the results” of the one-child policy “have been impressive. By reducing the number of dependents per household and freeing more women to enter the workforce, population control efforts have helped lift hundreds of millions of people out of poverty and contributed to China's spectacular economic growth.”

Not so, say a number of economists, who point to China’s turn toward “capitalism” — allowing some measure of entrepreneurship and private property — as the critical driver of the country’s growing wealth.

Mei Fong, a Pulitzer Prize-winning journalist and author of One Child: The Story of China’s Most Radical Experiment, credits policy changes such as “encouraging foreign investment” and “lifting barriers to private entrepreneurship” for creating China’s stronger economy.

“What also drove the economy forward was more people, not less,” Fong said in an interview. “China had this big population boom in the ’60s and ’70s. These people grew up to form the cheap labor force for the manufacturing boom of the ’80s and ’90s. Now, these people are forming a huge retiree community . . .”

Ironically, as Wendy McElroy, editor of iFeminists.com, wrote, “During the 1950s and ’60s, Chinese women were encouraged to reproduce and given awards for doing so.”

Such are the herky-jerky demographic twists when communist policy makers replace the natural course of human love and biology.

“The reason China is doing this right now is because they have too many men, too many old people, and too few young people,” author Fong told National Geographic. “They have this huge crushing demographic crisis as a result of the one-child policy.”

Many are now realizing that the one-child policy has created a disaster, with much more “demographic” pain ahead. The country’s population is aging. By 2050, according to United Nations projections, a whopping 36 percent of China’s more than 1.3 billion people will be over 60 years of age. And supported by far too few younger workers.

Yet, just months ago in the Huffington Post, Alon Tal, a visiting professor at Stanford University’s Center for Conservation Biology and a longtime environmental activist, praised the one-child policy for providing China with “a real chance to address its many challenges and offer its people a better life.” He suggested the policy was a “courageous collective commitment to the common good that averted untold human suffering and environmental abuse.”

“What struck me personally though,” Melanie McDonagh wrote in The Spectator after the Chinese announcement, “was that you’d get, in private conversations, academics with an interest in the environment and population, who would frankly admit that although the policy was no doubt unfortunate, it was necessary for its global environmental benefits. . . . It was a useful reminder that academic intelligence is no guarantee of moral groundedness.”

Along similar lines, Ye Liu, a senior lecturer in international education at the UK’s Bath Spa University, worries about the end of a policy she says “opened up educational opportunities for urban girls.”

Whatever the benefits or disasters deposited on the Chinese people by the social engineering of their “leaders,” the very idea that government should have the power to deny or permit the basic human right of procreation should be anathema to every decent person.

Alas, let’s recognize that the Chinese communists are not replacing their one-child policy with an embrace of reproductive freedom. The government will still limit couples to two kids. That’s better than one, sure. But I have three children. If I were Chinese, which one would I have to give up?