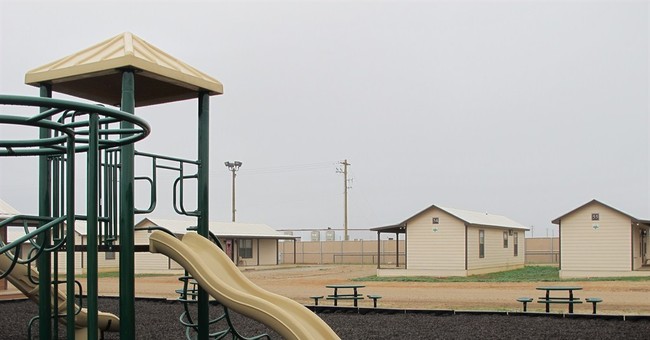 “This is surreal,” said their mother. “I can’t believe that anyone who claims to care about children would put children through this.”

Well, if you live in Silver Spring, Maryland, a town of 70,000 folks just across the border from Washington, DC, the “who” might be you and your city officials. The “what” is the six-hour kidnapping of a 10-year-old boy and his 6-year-old sister . . . by police and social workers.

Just a couple blocks from their home, this young pair were apprehended and taken into custody for the dangerous crime of walking home from a neighborhood park.

The police who nabbed the kids could have simply brought them home. But they didn’t. In fact, no city or county official even bothered to contact their completely distraught and panicked mother and father, Danielle and Alexander Meitiv, for hours.

Instead, police turned the kids over to Montgomery County Child Protective Services (CPS).

Nearly six hours later — and only after the parents had been coerced into signing a document stating that the children would not be outside the home without a parent present — their two children were returned to them.

Readers of my daily Common Sense e-letter know the Meitivs and know that this isn’t their first run-in with the insanity and absurdity known as their local government. Roughly a year ago, their kids were first picked up by police for the same serious offense of strolling along public streets coming home from a public park.

For months afterwards, CPS investigated the family, finally deciding the parents were responsible for what’s known by mindless bureaucrats as “unsubstantiated child neglect.” Yes, you read that right: “unsubstantiated.” Or put another way, there wasn’t evidence to actually prove neglect, since any sensible person can see the kids are well cared for, but officials want to keep this family under its thumb anyway.

So there. Now we understand. CPS will keep a file open on this family for five years. The Meitivs are appealing the finding.

What CPS specifically did not do, however, was inform the Meitivs — and the public as a whole — as to the rules regarding whether their children can lawfully walk down the public street by themselves. What is the law?

Indeed, there isn’t one. (Nor is one needed.) CPS points to a statute in Maryland stating that a ten-year-old cannot be left at home to care for other children under eight years of age. That’s a stupid law in my mind, micro-managing and largely unenforceable, but it just doesn’t apply to kids playing outside or tip-toeing through the tulips of their town en route home to mom and dad.

Many folks have used this family’s trials and tribulations as a springboard to debate “free-range” parenting. That’s a parenting style that allows children to venture out into the world without helicopter parents watching and guarding their every step. You know, like back when we were kids.

In fact, noting that as a child he often walked more than a mile to school or a ballfield, Marc Elrich, chairman of the Montgomery County Council’s Public Safety Committee, said that if this had been the policy back then, “All of our parents would have been in jail.”

Many arguments can be made to defend the Meitivs’ parenting choices, of course. But why bother? Freedom means the Meitivs don’t need the people of Silver Spring or the entire nation to sign-off on their family decisions.

We’re talking here about the arrest and detention of children, about threatening parents with the loss of those children. Why? Has any harm befallen this boy and girl? Are they malnourished? Have they been emotionally or physically abused?

Is it just too dangerous for a ten-year-old and a six-year-old to walk alone down a public street? So far, actual experience demonstrates otherwise. But the solution to a dangerous environment is to police the criminals, not to arrest children for peacefully walking.

And certainly not to detain those kids for hours without notifying their parents.

Enter big government’s hometown rag. The lead of the Washington Post story announced that “a Montgomery County couple had, once again, tangled with Child Protective Services.”

Or as The Post asks, “which side went too far this time”?

“The police and CPS for turning the children’s walk home from a park into an hours-long ordeal?” inquires The Post. “Or the Meitivs, who knew CPS would be watching them closely for at least the next five years and chose to let their children walk alone again?”

They should have known Big Brother was watching, eh?

Odd it is that today, exactly 240 years after “The Shot Heard ’Round the World’ at a skirmish in Lexington, Massachusetts, between the world’s greatest empire and American minutemen, we are talking about “The Walk Heard ’Round the World,” a battle pitting local officialdom against a family that simply wants its children to be free to tread down the street by themselves.

“They were both scared they would never see us again,” Danielle Meitiv, their mother, told reporters after being reunited with her kids. “They were scared they were being taken away from us. I was scared of that, too.”

America, Land of the Scared.