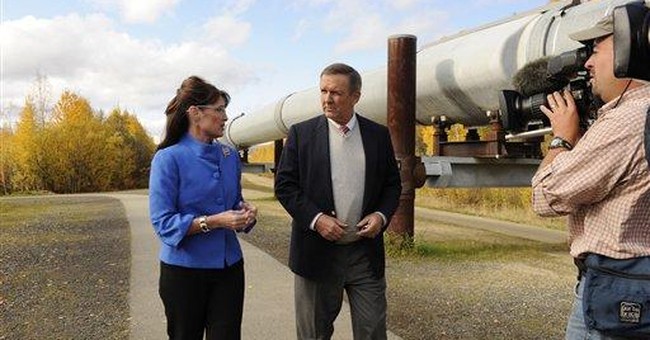 I am very enthusiastic about the future. The future may prove better than we can conceive. It could even outshine our hopes.

There's a corollary to this: Many common hopes are ridiculous. In politics, at least, we too often hope for the wrong things. The future surprises us. Our politicians plan for one direction, progress occurs in another.

Which makes politics filled with disappointments. And misdirection.

This came home to me, again, a few weeks ago. I was excited about John McCain's selection of Alaska Governor Sarah Palin as his running mate. She is a strong believer in transparency in government. She has fought against corruption.

But even as she accepted McCain's nod, in her first national speech, she said something utterly ridiculous. She characterized her work for a natural gas pipeline in her state as a move towards energy independence.

Ask yourself: Why is this even considered as a goal? Energy independence is simply not desirable. Only a Pol Pot could bring it off . . . with Pol Pottish results.

I know, I know: Everybody talks about energy independence these days. Ms. Palin isn't alone. She has John McCain to back her up. And their opponents, Obama and Biden, to echo her sentiments if not her policies. (Democrats seem to want to become energy independent without increasing production of current fuels.) You can easily join an organized wing of the movement, visiting sites like "American Energy Independence" and "Energy Independence Now." But you can also beat your head against a brick wall for eight hours a day, for all the good it will do you. We live in an interconnected world, and we depend on others just as they depend on us.

As Robert Bryce, the author of Gusher of Lies likes to remind us, the U.S. was a net importer of oil back in 1913. Do you really think we're going to be less dependent on foreign sources now that we have developed our energy-intensive economy for a century?

Trying to do so, and succeeding, would be to spell "achievement" P-Y-R-R-H-I-C. We grumble at gas over $4 per gallon. What would we do were we to supply all our own fuel for our vehicles, but have it cost $14 per?

And yet the idea remains popular. But then, you can get people worked up in many counter-reality ways. Luddism will always have a few advocates, and may someday get more (in fact, when my computer misbehaves, I'm even tempted). The current craze is really nothing more than economic autarky, the idea that our political borders should be our trade borders. It flies in the face of everything we have learned about the division of labor and of knowledge and of genius, but it sounds good. If you don't think about it much. If you forget why we trade in the first place.

What is going on here? Why such irrationality?

Economist Arnold Kling, writing on EconLog, called election campaigns "brutal assaults on reason." He offered seven pledges for this campaign season -- pledges that he can deliver, since reality will act as stork. Here are his first three:

1. That no politician will end America's consumption of foreign oil. Ever.

2. That no politician will figure out a way to bring the bottom half of America's children up to the level where they can benefit from a college education.

3. That no politician will figure out a way to make American health care -- meaning virtually unlimited access to specialists and technology -- affordable for everyone.

Kling, an economist, understands why it is through trade and production that things get better, not as the result of the best laid plans of rats and politicians.

We would all be better off, by many orders of magnitude, if we abandoned the notion of reforming the world to make us all "equal." And in that "all" I include the poor. And the sick. And the educationally deprived (Kling's "bottom half").

After all, the biggest problems in each of these areas have been caused by government action.

Take medicine. The regulation of health insurance and the amazingly expensive, byzantine FDA drug approval system make for just two factors that have jacked up the price of health care. Our response to outrageous government failure should not be to ask for more utopian policy from on-the-make politicians. The rational response would be to demand less.

Besides, the only way to make every form of care affordable to everyone is to stop the engine of progress. New treatments are always more expensive. It takes years to bring their costs down, even in a free market (which we don't have, by the way). Force providers to provide only inexpensive treatments, and you kill the future progress of medicine.

Similarly, education in this country is beset on all sides by nearly insane government policy:

• education curricula set by federal and state-level education hacks; and

• a collapsed standard of achievement. (What we now demand of high school grads used to be regularly achieved by elementary students.)

On top of all this, to talk of getting everybody to college is idiotic on the face of it -- schooling is not that great a way of learning for many, many people . . . perhaps most. Such a demand attacks the wrong problem.

And don't march people who neither need nor want "higher education" through an expensive and often counter-productive system. Students occupying the lower levels of the academy can often shine in the real world, so long as the real world hasn't been cajoled into thinking that the most important thing in any career scheme is college. (One of the great things about the early stages of the computer revolution was how much of it was initiated and nurtured by people who were drop-outs. That should have been America's "wake-up call": formal schooling is over-rated in part because it is over-valued.)

Finally, there's this persistent lack of understanding about energy. And markets. We may someday replace oil as the main source of energy to heat our homes and drive our vehicles and haul goods from one hemisphere to the next. But it probably won't be soon. And it should never be pushed by politicians, who are too easy to fool.

Politicians like subsidizing things. They boast of this. But after the subsidy they cannot judge whether they've done well or ill. All they know, really, is whether or not the people they give money to are happy.

Of course they are! You give me a hundred grand, I'll be as blissful as a clam. But have I done anything significant with it? Well, I've spent the money . . .

So, this election season, let's keep our reason.

Don't expect our reps, senators, president or even (hah!) vice president to solve all our problems. Most will never be solved as such. They will only be ameliorated over time, by processes no politician can control, by the workings of people only tangentially associated with government.

We'd be a lot better off keeping our politicians fixed on things they might have a chance of taking responsibility for, like the criminal justice system. You know, the basic rules we all must live by, the defense of our rights.