Grandma Got Run Over by the Olympics 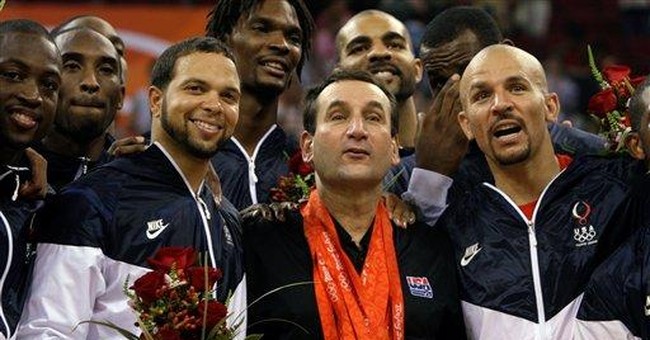 Just how important is it to you that your grandmother not be sent to a labor camp?

As the Beijing Olympics fade in memory, take one last note of the septuagenarian women threatened by Chinese authorities with a year in a labor camp for the terrible crime of seeking a permit to protest at the Games.

I’m confident that your inquiry won’t harmonize with so many world leaders and media outlets obliviously dubbing the Games a “success.”

United Nations Secretary-General Ban Ki-moon released a statement congratulating “the government and people of China on their unprecedented effort and success in hosting the historic Olympic Games in Beijing.”

It’s nice that Mr. Ki-moon notices the blessed distinction between the government and the people — the ’Butchers of Beijing’ and the butchered. But how, then, can he congratulate the former?

As the XXIX Olympiad came to a close, The Washington Post’s front-page headline lacked subtlety: “A Victory for China: Spectacularly Successful Games May Empower Communist Leaders.”

Even the Christian Broadcasting Network argued, “Granted . . . it’s not as if every area of disagreement has simply melted away. Instead, the Olympics provided a way for China and the international community to come together and to begin to find common ground.”

How much “common ground” should we be expecting to find with thoroughly repressive China?

But there I go bringing politics in. International Olympic Committee President Jacques Rogge, a man with no ax to grind against tyranny, let it be known that, “The IOC is extremely pleased with the organization of the Games.”

Yes. Perhaps we should write that word “organization” with a capital O. (Should we capitalize “oppression” as well?)

Rogge, later given an honorary gold medal in synchronized cluelessness, announced at one news conference, “China has opened for the world to learn all about China, and China all about the world.”

What China learned, I’m afraid, is that political leaders throughout the world have little concern for freedom, for basic rights.

Back in July, IOC President Rogge had bragged that, “For the first time, foreign media will be able to report freely and publish their work freely in China. There will be no censorship on the Internet.” But he reverted to “silent diplomacy” when the Chinese communist government censored the Internet anyway, in violation of the agreement with the IOC.

At Games’ end, Rogge did share with reporters that he “found it unusual” that the Chinese government had not issued a single protest permit.

President George W. Bush also played the fool in Beijing. Many people — including this columnist — counseled Bush not to attend. He went anyway. While the President did offer a few words of gentle condemnation concerning China’s sorry record of systematically violating human rights, his presence tacitly endorsed the Chinese regime.

And a picture speaks the proverbial thousand. The photo of Bush bear-hugging Russian Thug-in-Chief Vladimir Putin was beamed around the globe as the Russians marched into Georgia.

As for China, a White House spokesman said the Administration was “disappointed,” calling the Olympics “maybe an opportunity missed for the Chinese to demonstrate their willingness to be more open and to allow more freedom of speech, freedom of religion, while the world was watching.”

Of course, what those who didn’t already know learned about China was that the country’s rulers have no willingness to allow more freedom. That’s why none was demonstrated.

On the other hand, the Chinese seem more than willing to cheat in gymnastics. They also keenly fake fireworks shows. And switch a lip-syncing child for the real singing child merely to present a prettier Chinese face to the world. China’s Olympic behavior echoes the old Soviet approach to sports.

How can anyone see such spectacles and not be struck by the depressing, de-humanizing effect of near-total government power over the individual?

The Chinese athletes won more gold medals than athletes from any other single country, including the USA. Yet, they lacked a certain level of enjoyment.

“Our athletes have more pressure than other countries’ athletes,” says Mao Zhixiong, a sports psychologist at Beijing Sports University. “Many Chinese athletes practice their sports not because they like it but because they are selected by the country.”

Many promising young athletes are taken from their families at a young age. Zhao Mu, chief editor of the blog channel at Sohu.com, says Chinese athletes lack a personal motivation, seeing themselves as “just symbols of national honor to be shown in public.”

The Olympics are always a little suspect to Americans. After all, there’s no football. Instead, gold medals are awarded in badminton and rhythmic gymnastics. The 1984 Olympics showcased solo synchronized swimming. (But that didn’t last long; booted out after one Olympics because, well, what is a “solo” supposed to “synchronize” with?)

But as lovers of sport, Americans invariably enjoy the Olympics. We do not, however, enjoy despotism. And we should not have to accept one along with the other.

Our leaders may willfully ignore the obvious, but we citizens must never do so. Even if all we can do against such oppression is to recognize it, refusing to excuse it in any sense, at least that’s something.