Paul Greenberg
|
Posted: Mar 30, 2018 12:01 AM
Share   Tweet
The opinions expressed by columnists are their own and do not necessarily represent the views of Townhall.com. 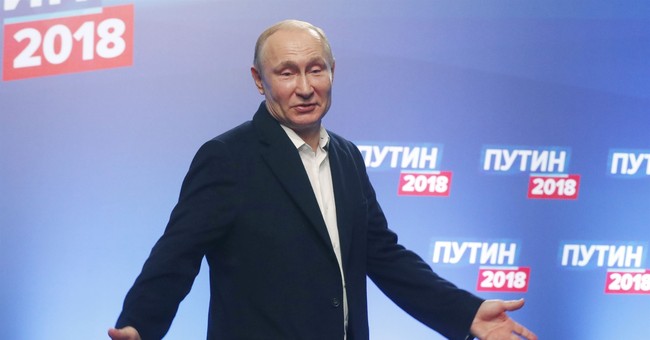 Haven't we been here before? It all feels so familiar, even comfortable. Once again, the world is conveniently divided between east and west, freedom and tyranny, them and us. You can almost feel your way around in the darkness cast by the fear of a thermonuclear confrontation between old enemies. No more playing palsy-walsy with The Bear That Walks Like a Man but a clear recognition of who our friends are, and our enemies, too.

Reality can be refreshing for a change. Which is why it was good news when Donald J. Trump, president of these often less than United States of America, announced that this country was joining all our Western allies in expelling scores of Russian diplomats. Why? Because the Soviets -- excuse us ... the Russians -- had been implicated in the poisoning of a Russian defector in Britain.

Welcome back to the old days, keeping in mind that it's better to fear an enemy than pretend that he's suddenly become a friend. "Together," announced British Prime Minister Theresa May, "we have sent a message that we will not tolerate Russia's continued attempts to flout international law and undermine our values." Three cheers, hurrah and all that. This country's expulsion alone identifies 60 Russian intelligence agents, plus their families, and gives them seven days to pack and leave this country.

It sounds as if the United States is taking no guff from our no longer concealed common enemy. And neither are the Brits, God save the Queen. For the Western allies, it seems, are more allied than ever. While we're at it, the United States shut down the Russian consulate in Seattle because of its nearness to an American submarine base and a big plant belonging to the Boeing Co.

"Today's actions," announced the White House, "make the United States safer by reducing Russia's ability to spy on Americans and to conduct covert operations that threaten America's national security." Besides, the 12 Russian agents at the United Nations were also busily engaged in the assertive collection of intelligence on this country's territory. So says the White House, and there's no reason to doubt its words, knowing what all of us do about the tireless work of Russian agents.

"When we see these espionage tactics that are taking place right here at the heart of the UN," said our ambassador to that international organization, Nikki Haley, "we can't have that." And won't any more. America's officials say there are now more than 100 Russian intelligence officers in this country, but, happily, they shouldn't be here for much longer. Uncle Sam has awakened and is acting in concert with our allies all across Europe and the globe to put an end to this dangerous nonsense. No more just hitting the snooze button, rolling over and going back to sleep on guard duty.

You name it, and free nations around the world are joining Britain, France and Germany in protesting Russia's role in a nerve-gas attack on a Russian defector and his daughter in British territory, calling it a clear violation of international law. The Brits have accused Moscow of using the Soviet-pioneered nerve weapon novichok against a former Russian intelligence agent and his daughter, both of whom were rendered comatose. As usual, the Russians claim to know nothing about all this, but the whole history of their espionage activities argues against their protestations of innocence.

Even members of Congress who have criticized President Trump for not doing enough to take Russia on for its spying now are praising him for finally facing the Russians down. Arizona's stalwart senator, John McCain, calls the latest news "a welcome step forward in holding Putin accountable." United the world's free nations stand against the Russian dictator. Divided they will surely fall, one by one. It's an old truth that is being recognized still again.

"This unfriendly step by this group of countries," Russia's foreign ministry said, "won't pass without impact and we will respond." By all means, let the Russians do their usual worst. If there's anything wrong with the West's newly unified actions against this old enemy, it's that they don't go nearly far enough.

James Nixey, who heads the program about Russia at think tank Chatham House, says, for our side, "there is, so far, no cyber-response, no financial response." If so, let's hope there soon will be. Now is no time to talk a good game but do nothing. Here's hoping Mr. Nixey, like the Russians, is underestimating the West once again. Let's get those counter-intelligence operations rolling. We've done it before, and there's no good reason not to do it again.