Paul Greenberg
|
Posted: Feb 14, 2018 12:01 AM
Share   Tweet
The opinions expressed by columnists are their own and do not necessarily represent the views of Townhall.com. 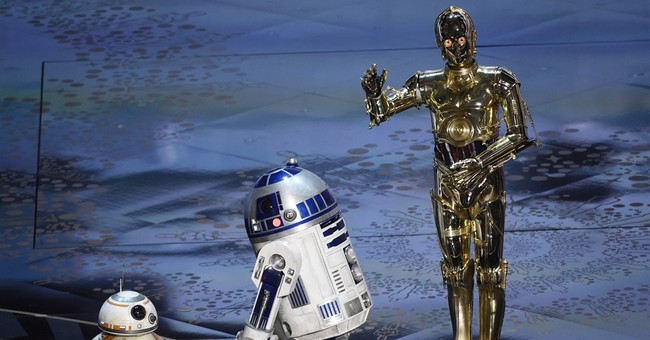 It happened long before the current rage for gender equality broke loose and the cheers broke out for the final triumph of nurture over nature. Way back in 1933, a perceptive observer of popular culture named Christopher Dawson could see where modern society was headed:

"The functions which were formerly fulfilled by the head of the family are now being taken over by the state, which educates the children and takes the responsibility for their maintenance and health. ... To the modern girl marriage and motherhood appear not as the conditions of a wider life, as they did to her grandmother, but as involving the sacrifice of her independence and the abandonment of her career ... under these circumstances, who will trouble to marry?" And today, many don't.

Real life can now be left to the servants, preferably mechanical ones like R2-D2 and C-3PO of "Star Wars" fame. All of which should free us to concentrate on first things -- but doesn't. We are forever distracted by our distractions. For example: Consider tedious entertainments like the Trumpian politics of this low time.

Yet the more our attention is caught by such latter-day things, the more we are driven to search for first things, which are the alpha and omega of our brief firefly's existence before the end arrives. And the more we grow sick unto spiritual death of today's imitation of thought, our own artificial intelligence, the more we miss the real thing. The more removed from Scripture we grow, the more we are tempted to write our own, like the "Star Wars" narrative, inventing new folk heroes like wrinkled old Yoda and omniscient Obi-Wan Kenobi as played -- to the hilt -- by the matchless Alec Guinness. And yet something is missing. Call it soul. For there is something soulless about these artifices that leaves us deeply dissatisfied. To borrow a phrase from the 1559 Book of Common Prayer, we yearn to be godly and quietly governed.

As a second Elizabethan age draws inevitably close to death, modern culture such as it is leaves us restless, for we sense there is no health in it. All such simulacra should come with a warning label to those who seek refuge in them: Accept no substitutes for the real thing. And the substitutes on offer seem everywhere. Don't be fooled by them. They are just another version of the graven images that an ancient text warns us against worshipping. For I am a jealous God and thou shalt have no other gods before me. The newest thing turns out to be the oldest thing where temptation is concerned. Ye shall be as gods, the serpent warns, and though his words might change, his approach hasn't. You'd think he would have developed a new sales pitch over the eons, but his remains the same old swindle.

Pity poor R2-D2 and C-3PO, who are headed for the junk pile no matter how many repairs they undergo in their robotic lives. Like our own, their existence is limited, and the only warranty for it is faith. And faith cannot be as simply installed as another movable part. It is eternal, and while it waxes and wanes, it is always there, waiting to be summoned by belief.

R2-D2 and C-3PO were made in our image, and their makers and programmers may change them at will. But our robots have no will of their own, including the will to believe. Their choices are limited, while ours are limited only by our own self-doubts.

Recommended reading: Ellen Wilson Fielding's introduction to the fall 2017 issue of the Human Life Review. It's an old issue by now, but it's not dated, for the truths it deals with are eternal.