Paul Greenberg
|
Posted: Jul 07, 2017 12:01 AM
Share   Tweet
The opinions expressed by columnists are their own and do not necessarily represent the views of Townhall.com. 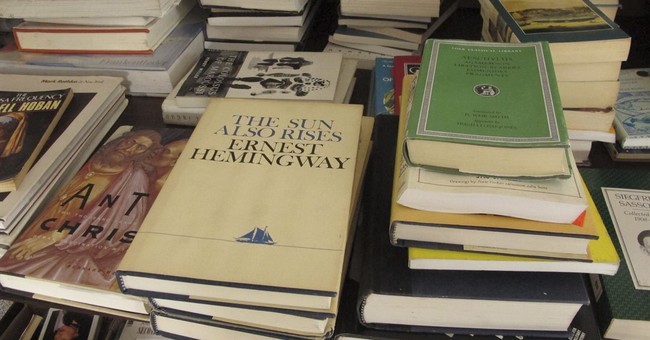 Little boxes on the hillside

Little boxes made of ticky-tacky

Little boxes on the hillside

Little boxes all the same

There's a pink one and a green one

And a blue one and a yellow one

And they're all made out of ticky-tacky

And they all look just the same

And the people in the houses

All went to the university

Where they were put in boxes

And they came out all the same

And there's doctors and lawyers

And they're all made out of ticky-tacky

And they all look just the same

Now we know the answer to an age-old question that has puzzled philosophers since Socrates' time. Poor fellow, he couldn't have anticipated our advanced era or he might have avoided getting into trouble and meeting his end at the order of the political authorities of ancient Athens, who prescribed a cup of hemlock for the old rabble-rouser, who had nothing to do but wander through the Agora posing leading questions to the impressionable young.

The unexamined life, he asserted, wasn't worth living so he proceeded to over-examine it, not knowing that millennia hence the masterminds at the University of Arkansas would reveal the secret of the good life: accumulating the most stuff before the Grim Reaper comes along to announce closing time.

Michael Moore, vice president for academic affairs for the University of Arkansas system, now has explained what this debate between the wisdom of the ages and our own is all about: "It's an economic development issue. People with college degrees attract better employers to the state because they (the employers) want a more educated workforce. People with college degrees that have better jobs earn higher wages, which means they buy better homes and better cars and they spend more at the grocery store and they take more vacations and they buy the lake house."

It's all quite simple when you think about it, and maybe even simpler when you don't. Because this theory propounded by the Michael Moores of the world and all the other true believers in economic determinism have developed quite a following over the years. To sum it up, money talks, and the folks with the most money talk loudest. Ergo, all you out there ought to join this materialist movement before you're left behind. So hurry up, hop on the bandwagon, and go back to college if you've ever dropped out. And tell others to join you. And indeed it does make sense for the dropouts to go back to college, but maybe not for the simple, indeed simplistic, reasons that Michael Moore gives.

"This is an investment that makes sense for the state to be part of," says Dr. Moore (doctorate, political science), and "I don't mean just the state government." For he has larger ambitions for us all. "I mean everybody in the state." Just imagine what an exalted position on the faculty of a state university Socrates might have qualified for if only he'd followed Michael Moore's sterling example. But something tells us the old Greek wouldn't have been interested, having other matters to ponder -- like the meaning of life.

The president of the UA system, Donald Bobbitt, says he is proud of the "fantastic job" Arkansas' two- and four-year colleges are doing for the state's younger undergraduates, those between 18 and 22 years of age -- and he should be. But he acknowledges the state is not doing as well by its older students on campus. They may have gone to their classes, paid their tuition and various fees, but acquired a lot of debt in the process without obtaining a degree that would be marketable. And isn't that what a college degree is for? The suckers who simply love learning for its own sake and pursue it in the belief that education is its own reason for being and the beginning of a life-long adventure may have something no amount of money can buy: faith in education as something more than a meal ticket.

This state's governor and educator-in-chief, the Hon. Asa Hutchinson, shares his view, says Dr. Bobbitt, who clearly earned his undergraduate degree in something other than philosophy, namely chemistry. Dr. Bobbitt says the governor understands that "in order for us to continue to attract the kind of corporate enterprises we want, to provide the jobs, the quality of life, the cultural amenities it takes to keep Arkansas as a very desirable places to live, we have got to have an educated workforce. It's one of the first boxes that get checked when a company is looking."

In short, ask not what you can do for your state, but what it can do for you. The goal is to produce an educated workforce, whatever that means, and it's "one of the first boxes that gets checked when a company is looking" for a place to locate. And isn't that what the whole educational process should be about? For it's just a matter of checking all the right boxes, isn't it? And then fitting the educational product into those containers, the way one would turn out any other product for the market. Fill in your order blank and Arkansas will deliver what businesses need. Like any other product rolling off the assembly line. All that remains to be done is to change Dr. Moore's title from vice president for academic affairs to vice president for economic ones.

There may not be much call for poets and artists and musicians and their ilk in the help wanted ads, or even for those of us who provide them with an audience, but it's all a matter of supply and demand. And the supply of thinkers these days seems to far exceed the demand, which means the pay will be low. Unlike the compensation offered in trades that attract businesses to Arkansas. Therefore what's necessary is to beef up this state's offerings in skills like operating heavy machinery, handling computerized records and such.

We here in Arkansas should aim to please prospective employers. And that's what education is for. Any questions? If so, keep them to yourself, for if there's anything such a system discourages, it's dissent. As old Socrates discovered in his time.