Passover a Reminder that Freedom Can be Daunting

Paul Greenberg
|
Posted: Apr 11, 2017 12:00 AM
Share   Tweet
The opinions expressed by columnists are their own and do not necessarily represent the views of Townhall.com. 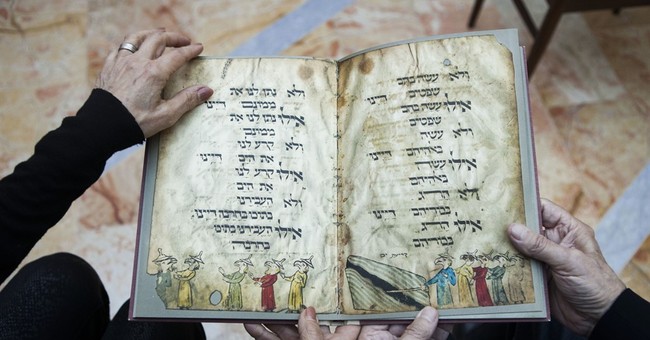 We Americans know what freedom is. It's one long Fourth of July party, complete with hot dogs, apple pie and a brass band playing "Yankee Doodle Dandy."

Tonight is another celebration of freedom, and quite a party it is, what with white tablecloths, festive bottles of wine for the required four toasts, crispy matzo we haven't tasted for a whole year, family stories of Passovers past, strange-tasting foods reserved for this special night.

The old story will be retold in response to the simplest of questions, which is to be asked by the youngest child at the table: "Why is this night different from all other nights?"

Then the towering, thunder-and-lightning, awe-filled Book of Exodus will be transmuted into answers fit for children of all ages -- a fairy tale told in song and story, capped by a great scavenger hunt at the end of the evening for the last crumb of sanctified matzo needed to properly complete the magical evening.

A good time will be had by all. That's what freedom is all about, isn't it?

No. Because at some point during the evening, reality will dawn. It's a different point for different people. For some the realization will come early, for others late, for still others never at all.

For me it comes when we spill the 10 drops of wine from our celebratory overflowing cups of wine. One drop of wine for each of the 10 Plagues that struck the Egyptians -- to show that our cup of joy cannot be full if others suffer, even our oppressors.

When the Egyptians were drowning in the sea, the Heavenly Hosts broke out in songs of jubilation. The Holy One, blessed be He, silenced them, saying: My creatures are perishing, and you sing praises! -- Talmud Bavli

That's when the light of the candles dims, the faces grow somber, the room closes in with every solemn word of the ancient tenfold recitation: Da-ahm, Tsfardayah ... Blood, Frogs. ... Drop by red drop, the fairy tale turns into history, red in tooth and claw. Until we arrive at the last and most terrible of the plagues, Markat b'horot. The death of the first-born.

Freedom spares no innocent, minces no words, presents no pretty pictures, uses no euphemisms, does not speak of collateral damage. It is not just shock and awe but attrition and exhaustion, internal divisions and friendly fire.

We're in the real world now, in which no house is spared death, cities fall, captives are taken, high towers burst into flames and come tumbling down.

Freedom is having nothing left to lose. It is the precious right to die with a weapon in your hands, even if it's only a paving stone. On the first night of Passover 1943, the ghetto rose in revolt. The rest of Warsaw went about its business. Trams ran, schools opened, cinemas played, children laughed and sang, musicians practiced, cafes served, goods and services and greetings and salutations were exchanged. And for the next 28 days and 28 nights, the pillar of smoke by day and of fire by night rose above the ghetto's walls. Who then was free, and who slave?

Tonight, too, there will be those who do not hear the crackle of the flames, the roar of the waves, the everyday foundations collapsing. They will not notice, perhaps until it is too late.

Freedom is a cloud of smoke by day and a pillar of fire by night, as terrible as an army with banners. It is statues toppling and mobs ravaging. It is children dying and houses cast into mourning. It is a young corpsman struck down while trying to save the lives of others. It's not just the stars and stripes finally raised above the island mountain, but the untold stories of all those lost in the muck and blood below.

A secret: There is no promised land. There is only slavery or the wilderness, and the eternal moment of choice between them. That is freedom, nothing more. And yet it is all.

One night of the year, we are summoned to break out of the everyday and make our choice. Pharaoh's army is forever gaining on us. There is nothing for it but to plunge into the roaring sea. Freedom is no party. It is a leap of faith.