Paul Greenberg
|
Posted: Jan 05, 2017 12:01 AM
Share   Tweet
The opinions expressed by columnists are their own and do not necessarily represent the views of Townhall.com. 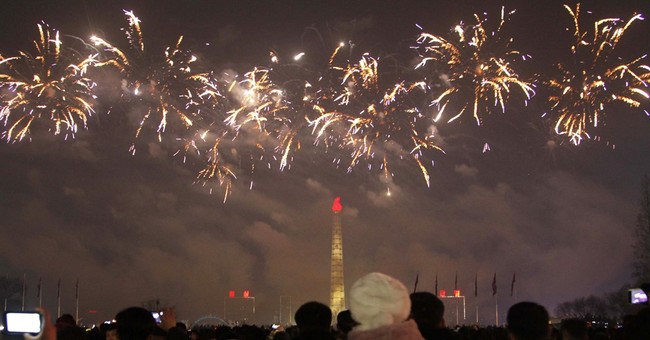 The road to the Other Place is paved with New Year's resolutions. The skeptic sees the new year as but an opportunity to renew old habits. A believer named G.K. Chesterton saw it differently: "The object of a New Year is not that we should have a new year. It is that we should have a new soul. ... Unless a man starts on the strange assumption that he has never existed before, it is quite certain that he will never exist afterwards."

Maybe that's what is meant by being born again. It's a universal impulse at the turn of the year: to look back on what one has been and resolve to somehow become what one can miraculously be. Even old Scrooge felt it after his trio of night visitors left him a changed man -- generous where he had been miserly, joyful instead of cynical, full of good will for all the world rather than bitter and isolated, determined to shuck off his old self and exult in the new.

The self-sufficient, ever cautious man of business, hiding behind his doors and locks, looked on the specter of his old friend Marley and saw himself. The scales fell from his eyes, and he no longer saw as through a glass darkly but, with the rising of the sun, rejoiced in the light.

His was the same felt imperative that may grasp some on seeing some perfect work of art. They are awakened. Almost involuntarily, they are moved to resolve, as did the German poet Rilke on seeing the archaic torso of Apollo in the Louvre: Du musst dein Leben andern. You must change your life.

It's the universal evangelical impulse -- the insight that no man is ever wholly lost, and can be saved in an instant. Call it the realization that it's a wonderful life.

Talk about an effective sermon: The most commonly used description of North Korea by those lucky enough to make it out is hell.

If hell is anything like their description of North Korea, I'm straightenin' up and flyin' right from this very moment. Call it a New Year's resolution: I must change my life.

"It wouldn't be New Year's if I didn't have regrets," wrote William Thomas. But remorse is the most wasted of emotions, which is why it needs to be transformed into resolution.

This is the time of year when New Year's resolutions are plentiful. The rest of the year will demonstrate whether there was any resolution behind them.

Charles Dickens described the holiday season as "a good time: a kind, forgiving, charitable, pleasant time: the only time I know of in the long calendar of the year, when men and women seem by one consent to open their shut-up hearts freely, and to think of other people below them as if they really were fellow-passengers to the grave, and not another race of creatures bound on other journeys."

Dickens put that feeling so well in his "A Christmas Carol" that it remains the best loved and perhaps most underestimated of books. For it is more than a seasonal greeting card, a television special, a feel-good gesture. It is a comment on the human condition, always swaying between self and others, the greedy and generous, the fearful and hopeful, caution and courage, laughter and sighs, the good impulse and the other kind.

Dickens himself became so identified with the Victorian ideal of Christmas that it is said when he died in 1870, a street peddler's little girl exclaimed: "Mr. Dickens dead? Then will Father Christmas die, too?"