Paul Greenberg
|
Posted: Sep 27, 2016 12:01 AM
Share   Tweet
The opinions expressed by columnists are their own and do not necessarily represent the views of Townhall.com. 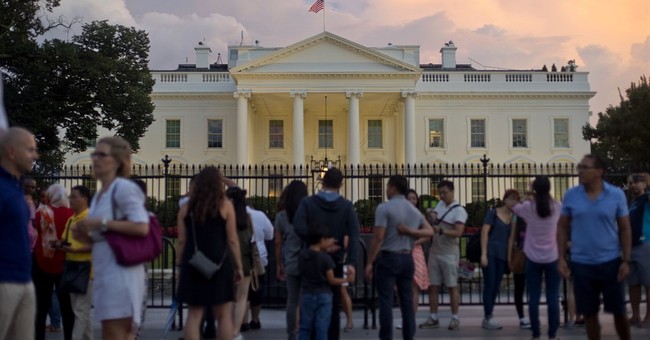 Alexander Hamilton said energy in the executive is essential. That was back in what used to be called the critical period of American history -- when the still new Republic was threatening to come apart, as eventually it did in the next century.

But this crisis is now and needs to be dealt with now, and decisively now. Instead, the major parties have nominated (a) a buffoon who seems willing to say anything that will give him and his followers a moment in the spotlight in this age of Trump and all things Trumpian, and (b) a "leader" with little but a record of reverses, defeats and setbacks for American policy. The major achievement of Hillary Rodham Clinton's husband and co-president was to get himself impeached.

So pick your poison and pray hard. For the Republic is in deep trouble once again, as it so regularly is. The well-designed piece of clockwork that the Founders bequeathed the nation now resembles a crazy clock more than a magnificent heritage for future generations. Nothing runs of itself despite the popular misconception that a galaxy of demigods set it. No, it requires human help and divine intervention from time to all too predictable time. If you're looking for evidence of that old theory, just look around you.

In this Our Year of the Lord 2016, no prospect looks better than 2020, when hope may be reborn. Just as this Republic was born and reborn through its well-worn history, each time with a different cast of characters: heroes and scoundrels, opportunists like Aaron Burr and traitors like Benedict Arnold, and characters to fill the cast of either a comic opera or a Shakespearean tragedy or both at the same tumultuous time.

Cervantes had his kingdoms of both words and action, and so did Winston Churchill, but it would be foolish to compare one with the other, for each lived and dominated their different ages. Call it a variety of the historical error called presentism. For different ages call forth different saints and sinners, innocent and not-so-innocent bystanders. And the neutrals we will always have with us, waiting till the dust settled before writing in it.

Carl Sandburg, the romantic biographer of Abraham Lincoln, said it of a woman he named Tomorrow:

sits with a hairpin in her teeth

and takes her time

and does her hair the way she wants it

and fastens at last the last braid and coil

and puts the hairpin where it belongs

and turns and drawls: Well, what of it?

My grandmother, Yesterday, is gone.

What of it? Let the dead be dead.

The doors were cedar

and the panels strips of gold

and the girls were golden girls

and the panels read

and the girls chanted:

We are the greatest city,

The doors are twisted on broken hinges.

Sheets of rain swish through on the wind

where the golden girls ran

and the panels read:

We are the greatest city,

This much we do know: Another crisis is upon us, one of many great and small we have seen and survived. Yet this nation has endured as it will endure.

Franklin Roosevelt, Abraham Lincoln, Washington and Jefferson, heroes and villains and in between, are all part of the great pageant we have been part of since time immemorial. May it ever go marching on. And it is not likely to cease as long as we're part of it. This generation's immigrants now await their curtain call to enter history's stage or leave it. And we sit spellbound, as an attentive and active audience should and yet will. Our places will soon enough be taken by the next generation.

And what stories they'll have to tell!