Paul Greenberg
|
Posted: Apr 07, 2016 7:00 PM
Share   Tweet
The opinions expressed by columnists are their own and do not necessarily represent the views of Townhall.com. 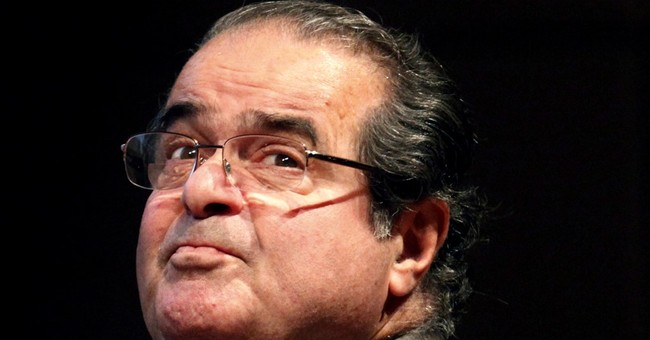 Trending
How strange. The brass-knuckle, bare-fisted, no-holds bout to determine who will succeed the late Antonin Scalia as an associate justice of the U.S. Supreme Court has been throwing off sparks at every turn. But I can remember wondering what all the fuss was about when he handed down his lone dissent in Morrison v. Olson decades ago.

It was in the summer of 1988 and Antonin Scalia was still a junior member of the court. But both political parties were united in deploring his youthful indiscretion, and so was popular opinion. For that was after the notorious Saturday Night Massacre took down the respected Archibald Cox, the independent prosecutor who was going to get to the bottom of this mess that had embarrassed the whole country and put all our republican institutions at risk.

Besides, by then everybody knew Richard Mountebank Nixon was a crook as soon as he'd assured the country he wasn't. ("I am not a crook.") An honest man would not have felt any need to proclaim his honesty; it would have been self-evident. A scholar and a gentleman, Professor Cox most certainly was, while Dick Nixon most certainly wasn't. A gentleman would never have done anything so immodest. It would have been as inconceivable as Donald Trump's acting like a respectable candidate for president of the United States today.

The law setting up an independent counsel, aka a special prosecutor, would be the first like it, but, alas, wouldn't be the last. For there may be nothing so contagious as a bad idea. Or bad law. It can be not only a loose cannon but the source of a lot of loose canon. But like many of today's Trumpians, fans of the independent counsel law were not to be reasoned with in their time. Reason was for sissies. Real men demanded passion. We wanted Richard Nixon's hide nailed to the wall and didn't much care what it took to do it, including this dubious innovation.

It took a thoughtful justice like Antonin Scalia to begin at the beginning of this constitutional saga with a few basic questions. Not since John Marshall in Marbury v. Madison had a justice of the Supreme Court made his case with such invincible reason. Taking his cue from The Federalist, he wrote that the separation of powers, not their combination in an office of independent counsel, was "the absolutely central guarantee of a just government...." For without that separation, "our Bill of Rights would be worthless" in the face of a regime that concentrated power instead of dividing it.

Justice Scalia ticked off the three powers -- not one or two but three, no more and no less -- that the Constitution specifies: the legislative, executive and judicial. "Frequently," he noted, "an issue of this sort will come before the Court clad ... in sheep's clothing." And it might take considerable effort to see the wolf inside. "But this wolf," he noted, "comes as a wolf." Which may be the most quoted passage of this classic decision, and deserves to be.

But wait. Wouldn't any abuse of this statute be checked by Congress' power to impeach a president or the people's power to defeat him at the next election? Yet, as Justice Scalia would note a decade later, "there have been nine highly publicized investigations, a source of constant political damage to two administrations." And this "mini-Executive that is the independent counsel ... is intentionally cut off from the unifying influence of the Justice Department, and from the perspective that multiple responsibilities provide." For example, a technical offense, as defined by the department, could be considered an indictable violation by an independent counsel.

Justice Scalia alone of all the court's members understood what this landmark case was about: power. The sheer, unbridled kind that the framers had feared. And why the introduction of an independent counsel upset the whole constitutional equilibrium they had so artfully designed, and therefore threatened our liberties. But even by the 1980s, the independent counsel law still had the support of congressional Democrats and the bien pensant of all persuasions. True confession time: I belonged to that last, smug and all too numerous category.

By then the office of independent counsel turned its attention to the Clinton administration, and everything looked quite different to its members and supporters. "Having worked with the act," Attorney General Janet Reno told the Senate Committee on Governmental Affairs, "I have come to believe -- after much reflection and with great reluctance -- that (the independent counsel statute) is structurally flawed and that those flaws cannot be corrected within our constitutional framework."

Her ox had been gored and so, after much thought, she had come to understand what Justice Scalia had grasped from the first: The lack of accountability on the part of these special prosecutors undermined our Constitution and our liberties. And she gave credit where it was due: "Here," she said, "I'm paraphrasing Justice Scalia's dissent in Morrison."

After that, it was all over but the law review articles and general acclaim decades later, when the fog and dicta finally cleared. Somewhere on the statute books, Morrison still lurks, but it was never renewed. The wolf had been turned back from the door, the law upheld, our rights vindicated and posterity well served. That was the end of this constitutional drama, and a happy one it was. Let the curtain fall to general applause.