Paul Greenberg
|
Posted: Jan 28, 2016 12:01 AM
Share   Tweet
The opinions expressed by columnists are their own and do not necessarily represent the views of Townhall.com. 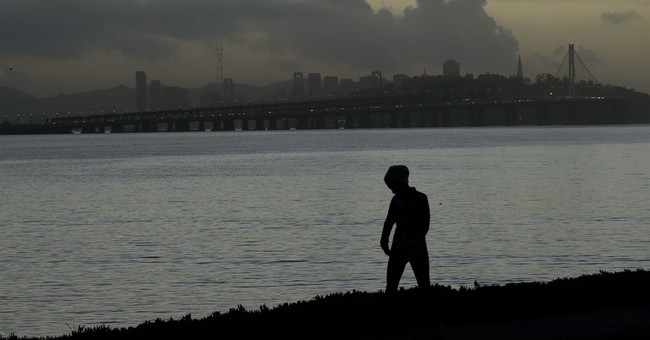 Somebody adjourned the world Friday.

Though it now seems long ago. You can hear the traffic again.

But then ... sudden, blinding light. Everywhere -- inside and out. Like floodlights. The world was a silent movie set. With a white mantle thrown over it.

Complete silence. Everything was muffled.

The sense of mystery. All was slow-motion.

Did you stand still in reverence or fear or both? No matter. You didn't even whisper. You were a ghost flinching in the light.

You stepped warily. Not just because of the snow and ice. Or fear of falling. But because you didn't want to disturb anything. The dream would hold if you just didn't wake the dreamer.

The edges of fences. The neighbors' house and yard. The curbs and gutters. They were under there somewhere. Changed but the same.

The rest of the house was asleep. Suspended. Enchanted. So were you. Lights, camera but no action.

You were a child again, full of wonder and guilt.

Hush. You mustn't wake anyone. Or they'd find out what you were up to. Even if it was nothing. Nothing was bad enough to those of us with a congenitally guilty conscience.

Time wavered. My boyhood friend was spending the night at 544 Forest Ave., Shreveport, La. What fun. Leon and I had gone to sleep after playing Monopoly, or maybe listening to Bob & Ray over the radio between the twin beds in one of the back bedrooms in the rambling old house. It was some time in 1944. The light was glaring through the blinds, reflecting off all the snow outside. I couldn't believe what I saw. A snowstorm had swept through overnight. Everything looked different. Everything was different.

We tugged on our galoshes, too excited to eat breakfast. School would be out. So would Hebrew school. We trudged off wishing we had snowshoes. My father had told us not to leave any footprints on the lawn, and we didn't. He had a photographer coming over to take pictures of the snow-covered house. Otherwise we were free as boys. And as well-behaved as little Jewish ones who didn't want to get into trouble.

We couldn't believe our good fortune. We were stranded in the best of all possible worlds, that of the imagination. Only the snow, the snow everywhere, was real. We made sure of it, tasting it now and then, throwing snowballs at each other. Our laughter rang. It was a new world.

We lived in back of C.E. Byrd High School, aka The City of Byrd, Home of the Yellowjackets. We could watch the marching band practice all week and then perform under the lights Friday nights. We ventured past the tennis courts, and across the creek that went through campus, arctic explorers every step of the way.

We climbed to the top of the high school stadium to appreciate the view all around. And were masters of all we surveyed. As an Extra Added Benefit, as the cereal boxes used to say, there was an almost inflated basketball under one of the stadium seats. Should we take it? I did. And suffered a guilty conscience about it for years. I didn't even like basketball, but today there were no boundaries.

The great adventure would stay vivid in my mind. As it still is. For it is the rarity of an experience that imprints it on the mind. Chicagoans would only be amused. My daughter up in Boston tells me the next swirling maelstrom is now headed for the Northeast on schedule without causing any undue comment.

But none of that makes any difference. Not if the adventure is sealed in a sea of white stretching out forever in all directions. If it is only a fleeting reality, it is reality. Now and unlimited, an ever-present. Like the taste of that snow, the glare of that sun that would never set. Past and present, now and forever, still meld. Nothing changes as Leon and I set forth and have yet to return.