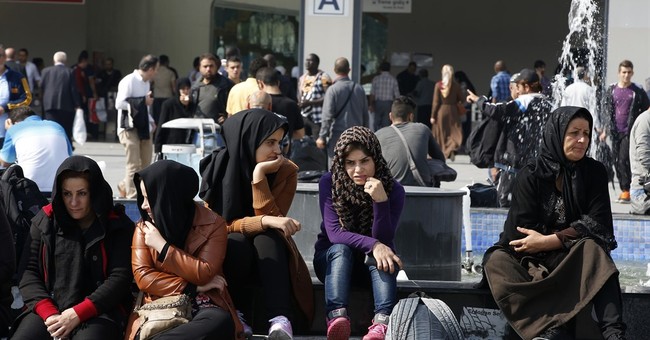 Here is Susanne Langer's eyewitness report, almost word for word, in the New Republic on the plight of those migrants seeking refuge in one country after another only to be turned back again and again:

In a third-class coach of the London express, an Englishman -- son of the imperturbable race -- was talking himself into a fine passion. I happened to be among his involuntary listeners. In the course of his harangue he repeatedly pointed his thumb at two young girls, who had stumbled into our compartment under the weight of their wicker trunk, just before the train pulled out of Plymouth. Now they sat staring at the speaker whom they evidently could not understand. Everyone was looking them over with sympathy and curiosity.

"From Serbia," cried the Englishman, "from Serbia all the way to New York and then deported! Think of it, the effort, the expense, the disappointment of it -- deported because the quota was full! And they have been torn away from their mother, young and stupid and scared as they are. Poor things." He turned to the older girl, who was barely 20, a pensive, rather sullen looking person with blunt Slavic features and very beautiful eyes.

"Going to Danzig?" he shouted, as though volume could make her understand the unknown tongue. She shrank a little, looked at him helplessly, and surrendered her ticket.

"You see, she doesn't know. She's being sent to London--I wonder why."

The train rolled through the smiling Devonshire landscape, and the two girls grew momentarily tenser with fear of the Unknown Land. Presently the increased rumbling speed of the train and the pitying scrutiny of their fellow-passengers unnerved them and they began to weep, quietly and desperately. We were at a loss. The curse of Babel put an insurmountable barrier between them and us.

Then by some chance remark passed behind wet handkerchiefs, we discovered that they talked German. I spoke a few words, and their faces brightened wonderfully at the familiar sound.

"Who is taking care of you here in England?" I asked.

"There is a man on the train who buys our tickets, but he cannot speak to us."

"Do you know where you are going?"

That was certainly true. They proved to be quite innocent of geographical knowledge, and learned with dismay that England was an island, that it did not border upon Serbia, and that they were going north instead of south.

We talked of many things, and gradually their story became coherent.

Kathe and Anna Focht, as they called themselves, had been Austrian Jugoslavs until their native town of Versec, in the great European kaleidoscope, had become a part of Serbia. They had been well-off and happy in Versec; then the great wars and revolutions had brought famine and high taxes, and had cast such a shadow over the old life, such doubt upon the future, that they had dreamt and talked of the Promised Land, where peace and plenty abounded.

They got their passports, and had them visa'd by the American consul. Mother Focht and five children started upon the great adventure, secure in the power of their passports -- for what could befall them while those official papers were correct?

The first thing that befell them was a week of detention on Ellis Island. It was somewhat worse than the steerage trip had been -- they waited, not knowing for what. Then they heard rumors that another paper had been signed and sealed with their fate: Mother and the three younger children should enter, but with them the immigration quota was full -- Kathe and Anna were to be deported!

"They kept us two more weeks," said Anna with a shudder. "It was awful then, because there was no hope, nothing to make us bear the filthy sickly life in those barracks. There were so many of us that we almost starved. Every day someone died of disease or broken heart, and many of the women went mad. We can never forget it, not if we live a hundred years! It was for that we came across the sea -- and now they have signed a paper, saying we must go back to Versec."

What they should do in Versec, or who should receive and protect them there, the paper did not say.

"Our home is sold," she continued, "we have sold our house, our furniture, our mattresses and cloaks and all our things. We are told to go home, and there will be no home. We must live upon the kind mercy of neighbors."

I tried to explain to her the necessity of our immigration law, and the impossibility of considering individuals among such a multitude of people. She nodded patiently, convinced of her fate.

Kathe, who had been staring silently out of the window, pushed back her kerchief and turned scornful eyes on me. "The Law is the Law," she said. "We know it. But this I will ask the American consul in a later life: why did he visa our passports at all, when it was forbidden to enter? Did he not know how many passports he had already seen, and how many could enter every month?"

America, which is the Promised Land at some time to all the oppressed of the world, stands thus in many memories as the Gate of Sorrows. Poor dreamers, can no one warn them of the fate that may await them?

It is all there in this account, the whole sorrowful tale. Except the dateline isn't today but February 22, 1922, a couple of years before the gates to the golden land would be closed in favor of even more restrictive immigration laws. The more things change, the more they stay the sad same.

Now, once again, some of our politicians speak glibly of sending illegal immigrants back to where they came from, splitting up families, and depriving the country of the kind of invaluable human capital that built it.

At the turn of another century, a Chinese woman with a valid passport landed at San Francisco with a child born during the trip. The immigration official was perplexed. Should the woman be allowed to land but her baby, who had no papers, be sent back to China? He wired Washington for instructions and the reply came back swiftly -- "Don't be a damned fool."

The demagogues and pettifoggers who now propose to deport millions of illegal immigrants from this country, unrealistic and heartless as such talk is, deserve the same pointed response.