The First Americans to Fight Back 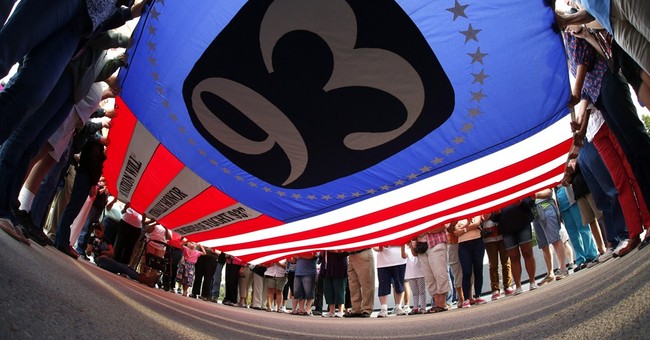 It was one of those morning flights. Routine. The ETD went up on the computer screens along with all the others. The airport didn't even have a familiar name like LaGuardia or Kennedy, Logan or O'Hare, but was lesser known Newark. Just a footnote to New York, like so much of grimy North Jersey across the Hudson.

The passengers on United Flight 93, the regularly scheduled morning flight to San Francisco, drifted down the aisle at their own pace. Or they rushed on board just in time if they'd waited till the last minute to board. Some settled in to call home, others the office. Many were already entering that altered state of consciousness that airline passengers slip into once they've checked their baggage and have nothing to do but wait, read a newspaper, get a cup of coffee, turn on their laptops. ... Yes, it was all routine. From here on in, they could leave the driving -- or rather flying -- to others. To the pilots, the flight attendants, the ground crew, the air traffic controllers. ... They were in that strange country called In Transit, or life in pause.

All in all, it can be a nice break, air travel, once you're past the hassle of check-in and have given yourself permission to relax. If you're not one of those too-active types with something always to do. Unlike the flight attendants. They have checklists to go over and a host of other details to attend to. One of them, CeeCee Lyles, still had time to call her husband, which she did several times a day. They were that kind of couple. A cop, he was just finishing a quiet overnight shift as a patrolman in Fort Myers, Fla., when CeeCee phoned him as she was getting aboard the flight attendants' shuttle to the airport, telling him which bills to be sure to pay, what was on his honey-do list that day, when they were due at a friend's for dinner ... that kind of domestic detail.

When she got to the airport, she called again. There didn't seem to be too many passengers on the flight list for United 93, she told him. "I've got an easy day," she said.

The crew was well-trained, their instructions in case of an emergency spelled out long ago: If they found themselves in the middle of a hijacking, they were to Stay Calm and phone the cockpit, using an innocuous word like "trip" to alert the pilots, as in "I need to talk to you about the trip." The crew's order of priorities in such a case was clear: Take care of yourself and the passengers. Get the plane down without further incident. Do whatever the hijackers wanted. Don't try to be a hero. The flight attendant's manual was quite specific on that point: "Be persuasive to stay alive. Be released or escape. Delay. Engage in comfortable behavior. Be yourself. Maintain a professional role...." The manual could have been a step-by-step guide to passivity. Everything had been anticipated. Almost.

When it happened, word got out phone call by phone call. Fred Fiumano, who ran Fred's Auto Repair in Queens, picked up the phone to find an old friend, Marion Britton, on the line. She was sobbing. Her flight had been hijacked, she told him, and two people aboard had already been killed. "They slit their throats." It's one of those details that stays in your mind, and gut, even years later.

It's something else to remember if and when the trials begin for some of our cosseted guests at Guantanamo, with their regular exercise periods, certified diets, prayer breaks ... all of them treated like Prisoners of War even if they're not. Even if they're illegal combatants. Cowards who slaughter innocent, unarmed passengers on an airliner. They don't wear the uniform of the enemy, if it has one, and who will slit women's throats with box cutters. Oh, brave jihadis!

The cowardice, the bloodthirstiness, the death worship of these fanatics ... all of those provide another reason never to imitate them, but to do justice without a trace of vengeance, by the book, without passion or malice. Cold, correct, legal. For we are Americans, and have a civilization to defend, not dishonor.

There were 40 victims aboard United 93 -- two pilots, five flight attendants, 33 passengers. All ordinary people, we would be told, who found themselves in extraordinary circumstances, and proved to be not ordinary at all. (Who is? For we are each unique.) Looking over their concise biographies, a newspaperman who wants to write about them, who must write about them today of all days, realizes anew that there is no such thing as an ordinary American, or an ordinary human being for that matter.

Every time you hear some talking head, some pollster or certified pundit pontificate about how Ordinary Americans think or feel about this issue or that, you can be sure only that you're hearing from somebody too lazy to see past the outward to the inward essence of man.

Todd Beamer, a crackerjack salesman, would lead the charge down the aisle with a cry that is now part of the American lexicon -- and American history. "Let's roll!" No, he was not ordinary. Neither was Toshiya Kuge, a 20-year-old college exchange student from Japan who was returning home to complete his sophomore year as a science-and-engineering major at a university in Tokyo. "He longed to come to America," his mother Yachiyo would say later. "Perhaps he liked the freedom." She would add: "He had a very strong sense of what the right course in life was." He was already an American in spirit.

Nor was there anything ordinary about Jeremy Glick, who'd been a college wrestler. He would join the charge down the aisle with everything he had, which was considerable. A man's man, he was just a great big softie when he was with his infant daughter. Being a daddy will do that -- turn the roughest roughneck, the burliest tough guy, into a gentle giant.

There was nothing gentle about the fury these passengers unleashed when they realized what was going on in the cockpit, and what had already happened to other flights, those that had crashed into the World Trade Center and Pentagon, and what these cutthroats -- literally -- had in mind: an attack on another emblematic American landmark, maybe the Capitol, maybe the White House. Whatever their objective, they never reached it. Instead, the 127-ton Boeing 757 with a fuel capacity of 11,500 gallons of high-octane aviation fuel went down in a fiery crash in a Pennsylvania field that is now hallowed ground.

Did the passengers ever breach the cockpit? All the voice recorder caught was the sounds of struggle and confusion. Did they wrestle with the hijackers for the controls? It doesn't matter. They fought back. That's what matters. Just as those three Americans -- plus a British businessman -- leapt to their feet as one when they understood what was happening on the Amsterdam-to-Paris express just a few weeks ago. Ordinary people? Not unless heroism is ordinary.

Ordinary people -- these first Americans to fight back September 11, 2001? These Americans who were told to be quiet and do just as the enemy told them?

Never. They were Americans, and Americans fight back. May it ever be so.