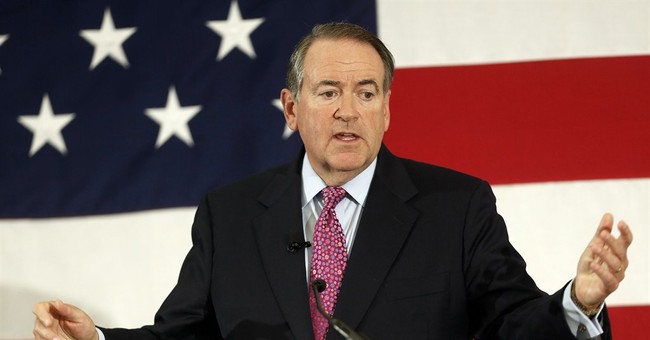 Hail, hail, the gang's all here, but to what purpose? Mike Huckabee is showing symptoms of still another presidential campaign, and all the old familiar faces are back -- his daughter Sarah, his spokesflack Alice Stewart ... and they're not getting any younger. Is this going to be a presidential campaign? Or a way for Brother Huckabee to continue his Fox News show under a different name? Maybe he's just moving his revival tent from television to the campaign trail in the spirit of William Jennings Bryan, who was as much evangelist as politician.

What can the Rev./Gov. Huckabee offer next year that the multitude of other Republican presidential hopefuls don't? A reprise of old themes, a journey back in time? After he extended his last presidential campaign again and again, it seemed as if it would never end. But he hung on for an indecent amount of time before somebody finally got the hook and ushered him offstage.

There have got to be more dignified ways for a politician to bore the public. Does the former governor of Arkansas -- but never former presidential candidate -- have hopes of becoming the next Harold Stassen? Remember that name? The governor of Minnesota, he was taken seriously when he first appeared on the national political horizon circa 1948, but who hung around -- for decades -- till he became only a source of amusement, then pity.

Doesn't the campaign of 2016 have enough candidates who have no business running? Does it really need another Rick Santorum? It's already got a whole field of forgettables.
CARTOONS | Steve Kelley
View Cartoon

Yes, there have been permanent presidential candidates whose candidacies served a serious purpose. They might be custodians of a cause -- like Norman Thomas, who became American socialism incarnate and, like the best third-party candidates, actually influenced the big two.

The money cranks produced a succession of candidates back in the 19th century -- champions of the greenback one year, the free and unlimited coinage of silver the next -- who took over the Democratic Party at one point. Grover Cleveland's gold Democrats were eclipsed for a while by charismatic personalities and irresistible orators like William Jennings Bryan, the Great Commoner himself. ("You shall not press down upon the brow of labor this crown of thorns. You shall not crucify mankind upon a cross of gold!")

Jacob Coxey, namesake of Coxey's Army, a legion of the unemployed that marched on Washington in 1894, became an historic figure and his march the precedent for many another on the nation's capital by protesters.

Huey P. Long's preparations for a third-party run in 1936 represented the high tide of American fascism. He personified its populist appeal with his mix of outrageous antics and mother wit. His potential presidential campaign alarmed Franklin Roosevelt, no mean orator himself. An assassin's bullet put an end to his ambitions, but not before he had shaken up the field and reminded Americans of how fragile our system was back in the Depression.

Gene McCarthy's candidacy in 1968, that annus horribilis of war, riots and assassinations, forced an unpopular president (Lyndon Johnson) to give up his hopes for re-election -- only to set the stage for Richard Nixon's triumphant comeback.

But for the most part, perennial presidential candidates remain only that, and why Mike Huckabee would want to join their ranks mystifies. Yes, he's changed -- he now resides in Florida, not Arkansas, and he's a decade older. The country lost a promising preacher when the Rev. Mr. Huckabee chose to become a mediocre politician instead. And the country already has a surplus of those. Does either he or Arkansas or America need another Huckabee campaign/road show? And if so, why?

Yes, I know, fish gotta swim, birds gotta fly and politicians gotta run for office, though why beats me. Mike Huckabee himself may not be able to come up with any better explanation than force of habit.