How to Divide People 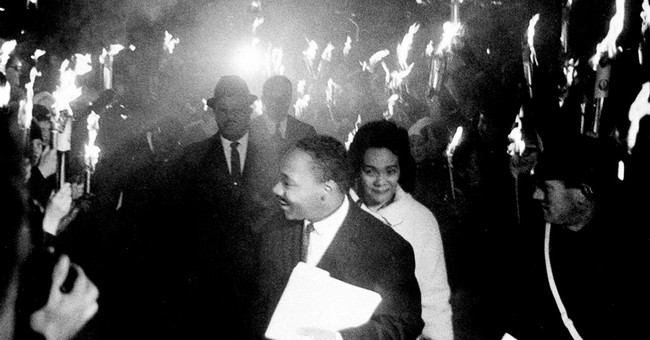 LITTLE ROCK -- Hide the women and children, as the old-timers used to say in these parts, for the Arkansas legislature is back in session. And it's always a clear and present danger once it gins up. Consider the latest brainstorm of one Nate Bell, a state representative from Mena, Ark., who has taken it upon himself to do a little historical surgery and split Arkansas' current celebration of both Martin Luther King Jr. and Robert E. Lee into two different official holidays. His idea is to replace the single day set aside to honor both the Reverend and the General with, shall we say, separate-but-equal holidays.

Sound familiar? Anybody who grew up in these latitudes' bad old days with its Jim Crow laws knows all about how this sleight-of-words works. In practice separate-but-equal amounted to separate but unequal, with the inferior hero/holiday/race confined to its own little ghetto. Under this proposal of Nate Bell's, Dr. King would keep his holiday and General Lee, along with lesser known Southern heroes, would all be lumped together in some separate but scarcely equal Confederate commemoration day--the way black folks used to celebrate Juneteenth almost on the sly. That's the day news of their emancipation finally reached Arkansas. Suddenly there wouldn't be a black face to be seen in Arkansas' little towns, for the black folks were off celebrating. ("Where are they all today?" "Why, don't you know? It's their holiday.")

When it comes to following that segregated pattern, the Hon. Nate Bell would fit right in. Naturally he's doing it only out of love and respect for the current minority -- those who still want to honor Robert E. Lee's memory with an official holiday. Fashions in holidays change along with those in clothing, as what once was In becomes Out.

The distinguished representative from Mena, Ark., is nothing if not a man of his fickle times. When it comes to going with the historical flow, he's a natural. He doesn't need to know that we've seen all this before, if with the colors reversed. That bit of historical knowledge (or maybe any other) might only get in the way of his evident pride in having come up with this ideal "solution" to a delicate political problem. Just as a legion of other Southern champions of Separate But (un)Equal once did -- from Lester Maddox in Georgia to Theodore Bilbo in Mississippi to George Wallace in Alabama. Old times here are not forgotten; they're just re-enacted with a cast of a different political complexion.

Having been rebuffed by wiser or at least more historically conscious heads on a legislative committee a few days ago, Mr. Bell assures all that he'll be back. Of course he will. Like a bad penny, a bad idea never goes entirely out of circulation.

The scavengers of history and great men's reputations we will always have with us, and they never quit trying to reshape history's unalterable judgment to suit their own tastes. And so, like Nate Bell, they'll always be back to turn history into Official History -- that is, the currently acceptable, antiseptic, PR-conscious, up-to-date and much preferable version.

Ah, the "uses of history," a phrase much in vogue at one time. As if each generation gets to go through this huge scrap pile of historical odds-and-ends, pick and choose just the pieces that fit its most cherished fixations, and construct a history, or at least an official holiday, to its own contemporary specifications. How convenient. No messy truths, complications or other obstacles to get in the way. Nate Bell can show us all how it's done. But, as it turns out, his approach to history is exactly backwards, as if we could shape our own history instead of its continuing to shape us. As if we could tell Clio, the muse of history who's seen it all by now, often enough again and again, just what to inscribe for all time. The hubris of it.

Strangely enough, Mr. Bell doesn't seem to like it when others try to custom-make history to please their own tastes. He even accuses them of nefarious motives. The King-Lee holiday, he says, "is being used to enhance racial division...." But it's all right, even meritorious, for him to try and split one holiday into two, and in the process ignite the same old pointless debate between those admirers of both men who don't want to share their holiday with the other camp. Indeed, they may consider combining the two holidays a desecration of their own hero. People can be funny. And sad.

A man of multiple talents, this state rep out of Mena, Ark., can also channel General Lee's ideas and tell us what the old gentleman would think of all this foofaraw over his birthday. Not only is Nate Bell an ingenious statesman, he's clairvoyant. "In fact," he says, "I'm confident if General Lee were here with us today, he'd say this is being used to create division" and "we need to stop it." Who knew our Mr. Bell here in little ol' Arkansas had such mystical powers? I didn't, and still don't. For the general never wrote his memoirs, never engaged in long-winded argumentations about this or that decision he made during The War, and, in short, never sank to the level of so many Civil War commanders who knew just what should have been done and when and how -- after The War was over.

Historians have a term for this attempt to cut and trim history so it'll fit the ever changing conceptions (and misconceptions) of the current present. They call the practice presentism. It amounts to viewing the past as an ever malleable asset ready to be shaped in our own image. As in the phrase "the uses of history," as if history were not a guide, teacher and experience of its own but ours to use as an instrument of our will.

Call this approach instrumentalism, and it's about as valid as instrumentalism in religion. Just believe, we're told, and our faith will be rewarded with health and wealth or whatever else we seek. But that's not faith; it's something closer to a business transaction. Much like faith, the study of history is its own reward. It doesn't change our fate so much as it changes us.

What would someone who actually made history think of all these games we play with official holidays? Someone like Robert E. Lee. Not much, I would guess, and I would have to guess because, whatever his thoughts about his own role in the nation's most terrible and decisive conflict, the general did not share them once the war was behind him and these several states united again. For when The War was over, he let it be over. He did not propose to refight it. Some of us will always honor his name no matter how much historical fashions change. For some things, like some men, are changeless.

For that matter, what would Martin Luther King think of this little dust-up over his birthday? In the best of all possible worlds, both he and the general would share the same holiday, uniting rather than dividing us. That millennial day is not yet here. But someday it will be. That's my dream anyway. Dr. King dreamed a dream, too: "I have a dream that one day on the red hills of Georgia the sons of former slaves and the sons of former slave owners will be able to sit down together at the table of brotherhood."

A question: How would Dr. King's dream be furthered by insisting on separate tables, separate holidays, separate and only supposedly equal celebrations?

One day, some of us still believe, we shall overcome, black and white together. On that same great day a-comin.'