The Unchanging Lee: On the General's Birthday, 2015 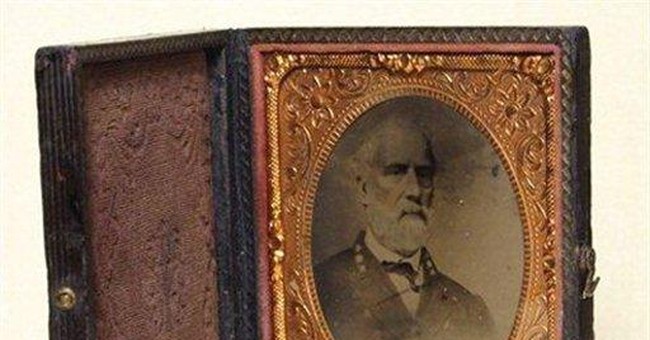 Events in the past may have taken place only once, but they are recounted again and again, and with every retelling may change. In that sense, nothing is more mutable than the past. No wonder it stays so politically relevant. Indeed, you can trace the course of political fashion in how different generations view figures like Robert E. Lee -- and Martin Luther King Jr. -- at different times.

The greater the historic figure, the greater the changes may be. Symbols matter, and when they're as powerful as Robert E. Lee and Martin Luther King Jr., there will always be those who set out to shape them in their own image, or at least fit them to their own size, shape and preferences.

Writing about Gen. Lee once a year -- on his birthday -- is one way to realize anew what a powerful symbol he is, and how all of us may find in him just what we're searching for that year. Pliable thing, history, and a useful one. An essential one. A nation without a history would be no more a nation than a human being would be human without a memory.

The uses to which Lee's name has been put vary. To the old folks at home, he is still an icon to be venerated, the centerpiece of a thousand Confederate Memorial Day observances, the storybook knight beyond reproach, the marble man of Southern mythology -- less man than monument. Flawless, shining in the light. The Alabaster Man.

The cynical and scornful can't resist using Lee, either. As a foil. As the personification of all Southern sins and hypocrisies. An icon always invites iconoclasts. The hero becomes the anti-hero, and history is revealed as one of the plastic arts. For once the past becomes usable, anybody can use it for any purpose. Call it instrumental history; we go to the past not as students but as scavengers, on the lookout for what we can find there and, sure enough, finding just what we expected. Even if we have to plant it there ourselves.

In politics, the demand for history made to order remains steady. "History shows ..." just what we want it to show. The idea of the past as something complete of itself, something whole, to be revered, not to be profaned for our own partisan purposes. ... How quaint such an attitude now seems. It smacks of the holy in a desacralized age. Much like the laws of war in an age of terror. The terrorists make their own rules, and so do some of those who would twist our own to fight them. Till, looking deep into the eyes of terror, they may see themselves reflected there.

Robert E. Lee was not so flexible. The times changed all around him, but he believed what he believed, much as he might have to struggle with it.

The American Civil War is often hailed as the first modern war. It saw the introduction not only of new technologies -- automatic weapons, ironclad ships, submarines -- but also of new strategies that did away with old qualms. William Tecumseh Sherman's total war, an innovation in 1864, became the standard of the next century. His march to the sea, destroying whatever stood in his way, also destroyed the distinction between military and civilian targets. "War is cruelty," he warned the people of Atlanta, "and you cannot refine it...." In short, war is hell. Sherman certainly made it so.

What began with the burning of Atlanta would culminate a century later with the incineration of Hiroshima. The future of war had unfolded like a mushroom cloud. A most modern man, Gen. Sherman. A prophet and precursor, practicing the hell he preached.

But if the American Civil War was the first modern war, it was also the last of the old, formal wars fought by a certain code of honor. Robert E. Lee's campaigns of mobility and surprise against forces superior to his own in every material respect may have been the last in a way of war going back to Hannibal at Cannae, his chivalrous code as old as Saladin's.

Far from a modern nationalist, Robert E. Lee wasn't even a sectionalist. He thought of his country not as the South but as Virginia, and her people as his people, much as Southerners even today speak of family as "my people." Offered the leadership of the greatest force ever yet assembled on the North American continent, he would struggle with the opportunity all night long, like Jacob with the Angel, but in the end decline it. Instead he would accept command of the Army of Northern Virginia. He would not, could not abandon his people, and The War came.

The most celebrated and dissected battle of that war remains Gettysburg, where not just two armies but the past and future of war met -- like Pickett's charge meeting massed artillery. There could be no doubting the outcome.

The name Chambersburg is not as well known. It does not exert the same fascination for the modern mind. Chambersburg, Pa., was just a spot where Lee paused on his way to Gettysburg. He was moving to the offensive and the smell of a decisive encounter was in the air that summer of 1863. Already reports had reached Lee's troops of the tactics Yankee marauders were beginning to use against the homes and families the men had left behind. A modern commander would have known how to play on their fears, how to raise their anger to a fever pitch, how to incite them to vengeance and victory.

But not Robert E. Lee, already a man of the past. Instead he issued General Orders No. 73. On entering enemy territory with his troops poised to strike and avenge, the countryside open before him, ripe for the ravaging, the commander of the Army of Northern Virginia told his troops only this:

"The commanding general considers that no greater disgrace could befall the army, and through it our whole people, than the perpetration of the barbarous outrages upon the unarmed, and defenseless and the wanton destruction of private property that have marked the course of the enemy in our own country. ... It must be remembered that we make war only upon armed men, and that we cannot take vengeance for the wrongs our people have suffered without lowering ourselves in the eyes of all whose abhorrence has been excited by the atrocities of our enemies, and offending against Him to whom vengeance belongeth, without whose favor and support our efforts must all prove in vain."

If the image of Lee changes in history, the man himself did not, even in the face of the greatest provocations. His victories were great, but his honor greater. Like all the works of man, what Lee did -- his victories and his defeats -- fade with time. Each generation is further and further removed from them. But what he was, the code he followed and embodied, that will last as long as conscience does. As long as the ever fecund past shapes us. As long as we can remember that it is not just we who use the past, but the past that also nurtures and sustains us. Like the memory of Lee.