It Can Happen Here — And Has 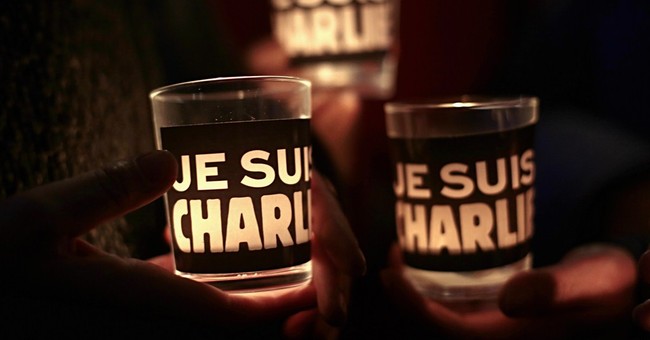 The headlines all over on Sunday's front page gave hope that France, which has practiced just about every form of appeasement over its checkered history, glorious and inglorious, was coming fully awake to the danger that now threatened it -- and all the West.

France, too, had come to realize how futile appeasement can prove, whether in Neville Chamberlain's time or our own. To quote one front-page headline: "After days of terror, France declares war/ Extremism, Jihad the enemy, premier says."

Good morning, sir. It's heartening to have you with us, and maybe even all of France -- for now, anyway. Not that the French haven't done their part against this recurrent evil, especially in their former African colonies. Legionnaires have been dispatched to Mali, the Central African Republic, Ivory Coast ... and have been greeted enthusiastically every time by a grateful populace.

But this time the fanatics struck home -- on the Rue Nicolas-Appert in the heart of Paris itself, slaughtering the staff of a French weekly and those assigned to protect it. At last France had come wide awake. The country's premier even dared name the enemy: Islamist extremism.

Politically correct euphemisms for bloody terror can hold out only so long against the bloody facts, and terrible as last week's news was out of Paris, it may have aroused La Belle France at last -- and maybe all of Western civilization.

For how long, who knows? But for now the West seems to have been shocked awake. The awakening seems to come at different times for different countries. Here it came on September 11, 2001, which already fades in Americans' memories as politicians like Dianne Feinstein, the senator from California, join the pack hassling the CIA instead of supporting it. How soon we forget. And return, in Kipling's still relevant phrase, to "makin' mock o' uniforms that guard you while you sleep."

Once the danger is past, or just thought to be past, we tend to forget why organizations like the CIA and FBI and NSA and, yes, Scotland Yard and the French National Police exist. And need to. Some of us even take a short-sighted delight in caricaturing them as a bunch of Inspector Clouseaus, or even Dr. Strangeloves -- and go sleeping soundly on. Till the killers strike again.

Then our sophisticates are shocked, shocked to learn that Evil still exists in the world, and old Satan still goes to and fro in the land, and walks up and down in it. It's a story as old as the Book of Job.

Yet the West seems to forget the moral of the story every time: Eternal vigilance is the price of liberty. And we nod off again. The danger may seem so far away for a time. But ignoring it may only assure that it spreads -- to France, to America, to wherever the jihadists strike again. And they will.

For years now, Washington has tried to ignore the spreading civil war and general barbarism rippling out of Bashar Assad's bloody regime in Syria or what's left of it, bringing every kind of suffering with it. Surely it's no coincidence that one of the suspects in this Parisian rampage is now said to have fled first to Turkey and then, of course, to Syria.

The price of apathy can be high. Even if it's called Leading from Behind, it can amount to not leading at all. When even the French can see through such glib phrases, and start calling things by their right name -- like Islamist terrorism -- then there may be hope for our own government, too.

Lest we forget, even while reading the headlines from Paris, it can happen here -- and has happened here. And will surely happen again if our leaders prove less than vigilant. Unlike us, this enemy never sleeps.

, joined by crowds all around France and the world. It was said to have been the greatest mass demonstration in French history, which is saying a lot, for the French are known to demonstrate about just about anything just about any time.

Part of the overflowing crowd struck out on its own down Boulevard Voltaire, named for the philosophe who warned that qui plume a, guerre a. He who has a pen has a war on his hands, as the staff of Charlie Hebdo well knew. With their slaughter, freedom of the press has become all the rage in Paris, literally, as millions march, shout, demonstrate. Je suis Charlie!

The deluge of demonstrators in Paris on Sunday

There, too, were the Turkish Prime Minister, Ahmet Davutoglu, and Russian Foreign Minister Sergey Lavrov, representing regimes less than enthusiastic about freedom of expression in their own countries. But for a day it was a grand celebration of unity -- and irony.

As for this country's president, vice president, secretary of state ... somehow none of them made it to the march. Attorney General Eric Holder did attend an international conference in Paris about ways to fight terrorism, but he didn't make the march, either.

Surely they were all too busy making plans for this country's next strike against Islamic terrorists like ISIS to show up. Surely they, too, are awake to this danger. Because all of us had better be.