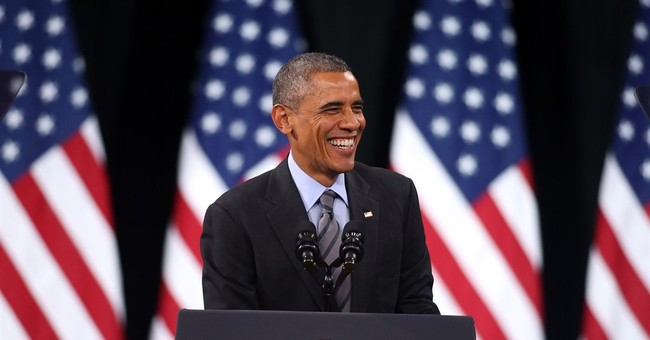 Barack Obama is back -- the one who electrified and united a nation a decade ago when he delivered the keynote address at a national convention. Remember? There was a time when he was still a young, idealistic senator, not a failing and flailing president who has taken many a wrong turn since, and started to sound more like ideologue than idealist. But in 2004, it was the old Barack Obama, or rather the young one, who brought that convention to its feet cheering and applauding when he pointed out that "there is not a liberal America and a conservative America -- there is the United States of America. There is not a black America and a white America and Latino America and Asian America -- there's the United States of America."

Not just the delegates inside Boston's FleetCenter that night were roused by the youthful senator's message, but the whole country. Some of us had almost forgotten that young man of long ago, but Thursday

night there he was again, older but still youthful in spirit. This time he was speaking from the Oval Office, and again he was awakening a nation that, caught up in partisan passions, had almost forgotten what it was destined to be -- one nation under God.

He was addressing the subject of immigration -- legal and illegal and somewhere in that murky area in between where millions now live in the shadows. Enough, he was saying. Our whole system of immigration is no system at all but a vast, shapeless mass that has been spawned by years, by decades, of neglect and procrastination. Till it's become the mess it is today: a sprawling bureaucratic mishmash that, like Topsy, just growed. Till there's no rhyme and precious little reason to it.

All recognize that this "system" has been broken for years, or should if they have eyes to see. And hearts to feel. For this jumble of rules and regulations, exceptions and waivers and fixes that prove no fixes at all, is as unjust as it is illogical. It separates parents from children, and good hard-working people from the law even if they would like to make amends and get on with their lives in this country.

Those opposed to really fixing this thing warn that the president is pursuing amnesty for illegal immigrants, but as he hastened to point out, the real amnesty is in effect now -- one that hasn't stopped illegal immigration but just abandoned those who managed to sneak across the border, sentencing them to a vague limbo somewhere beyond the reach of law, offering them neither justice nor mercy. Can this really be America? Not the America we know and still want to believe in.

So the president has stepped in to do what he lawfully can and should as chief executive, that is, faithfully execute the law to the best of his ability and powers -- just as other presidents, like Ronald Reagan and George H.W. Bush, have done when other waves of desperate immigrants needed to be sorted out judiciously, and the immigration regulations reformed to meet not just their needs but the country's. For this president's action isn't just in the immigrants' interest but in the national interest.

The real wealth of this country, its real promise, lies in its people. And here are millions of them asking only for an opportunity in the land of opportunity -- not amnesty but justice and mercy. The president wasn't proposing to give them any special break, for all those covered by the president's executive order would have to meet a number of standards, like clearing a background check, and generally getting right with the law before the cloud of uncertainty they live under is lifted at last.

Are we really going to punish young people who were brought here as children, then brought up as American as anyone else, and now seek only to share the American dream? And to fulfill it, not just for themselves but for all by contributing what they can to the common weal. To deny them that opportunity would be -- we can't think of a better term for it -- un-American.

Those who accuse this president of flouting the Constitution may forget that one of the primary purposes of that document when it was still new was, in Hamilton's words in the Federalist Papers, to assure "energy in the executive." Too often this president has been energetic in dubious causes; this time he is acting in a noble one.

night was moving, eloquent, appealing -- but it was not a fighting speech. Rather it was a plea to come reason together, and do the right thing. Not only by these millions of immigrants and their innocent families but by the country's future.

Barack Obama's fireside chat was also a tribute to American exceptionalism, for this is a nation bound together not like others, by blood or class or party, but by shared belief and hope -- united not by ideology but ideals. It may have been the always perceptive de Tocqueville who was first to note that ours is an exceptional nation.

American exceptionalism has many strands, one of the more prominent being that we are a nation of immigrants. Another is that here we separate church and state, not religious ideas from the public discourse. That's been true since our founding: "We hold these truths to be self-evident, that all men are created equal, endowed by their Creator with certain unalienable Rights...." The president's address to the nationThursday

night embraced and advanced both themes -- that this is a nation of immigrants and one nation under God.

Ours is still a shining city upon the hill that sends forth its light no matter how we ourselves may shut our eyes to it from time to time. For we are not yet a nation like all other nations and, God willing, never will be. Let us hold fast to our uniqueness, our exceptionalism. And one of this republic's exceptional characteristics remains the inseparability of religious and civic values. Did you notice the biblical thread that ran through the president's remarks? He could have been reciting the Passover haggadah when he reminded us: "Scripture tells us that we shall not oppress a stranger, for we know the heart of a stranger -- we were strangers once, too." That shining city upon a hill still beckons, and its message has not changed:

Give me your tired, your poor,

Send these, the homeless, tempest-tossed, to me:

I lift my lamp beside the golden door.

It is time to keep that door open, and let hope in. Thank you, Barack Obama, for reminding us. It's good to have you back.