And the War Came 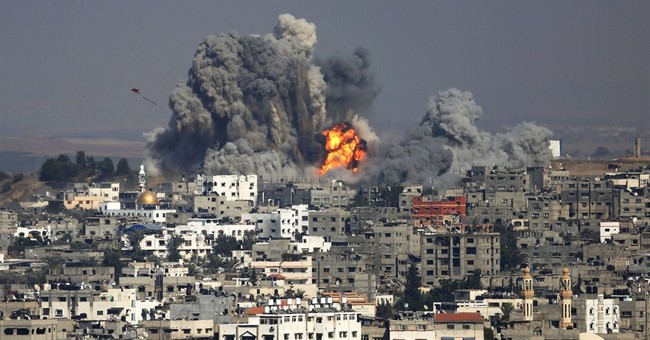 The innocent American could only read the headlines and shake his head sorrowfully at the continuing carnage in Gaza -- a pillar of fire by night and a cloud of smoke by day. How did this happen again? Simple: Hamas renewed its indiscriminate attacks on Israel through overhead rockets, underground tunnels, words and deeds -- and Israel finally responded in force.

Not just the innocent but the sophisticated observer has to wonder: Why? What's the sense of it? There seems none from the rational -- that is, the conventionally Western -- point of view. Which may explain why generations of Western diplomats, denizens of think tanks, and Deep Thinkers in general, have failed to make sense of this ever-renewed conflict, let alone end it.

All these modern Panglosses come off as hopelessly naive as John Kerry, and as completely ineffectual as Hillary Clinton -- the last two secretaries of state to preside over American foreign policy in that always dangerous part of the world. And both succeeded mainly in making it more dangerous.

Despite all the years of negotiations, hopeful beginnings that prove false starts, agreements that no one may agree with soon enough, temporary truces that prove all too temporary, the missiles and rockets soon fly again. And we're all back to reading, and some of us may even have to write about, the latest war in the Middle East as the bodies pile up. The place has been a trap since the days of Samson and the Philistines, and a trap it remains. Even if this latest temporary truce had held, it was fated to be only temporary.

Despite the best intentions of all, naive or knowledgeable, who cry Peace, Peace ... there is no peace. For the violent bear it away time and time again. Violence seems as endemic to Gaza as its heat and flies. And its wars.

Why? Surely it doesn't have to be this way, and yet the war came. Why? At such times the heretical thought occurs that, yes, it does have to be this way, for there are some conflicts that are by their nature irreconcilable, irrepressible and therefore unavoidable, even inevitable.

As unacceptable as so heretical a thought has become in the more nicefied precincts of the West, it keeps recurring. Lest we forget, there was a time when Western civilization, too, was split by holy wars fueled by religious fervor. It was not until 1648 that the treaties of Westphalia put an end to the Thirty Years' War and its slaughter by assigning disputed principalities to the formal faith of their sovereigns. But even after religious wars no longer divided Europe, they became national and ideological in character, and even deadlier.

One such irrepressible conflict finally bubbled to the surface even on these supposedly peaceful shores, and could no longer be put off any longer -- despite the best efforts of statesmen whose talents far exceeded those of the present generation's. Statesmen like Daniel Webster, John C. Calhoun and the great compromiser himself, Henry Clay. Yet all failed to put off the Irreconcilable Conflict forever. And the war came.

The saddest and most vicious breed of war, civil war, would ravage a no longer United States of America, and neither North nor South would emerge as they were before. The old republic would be forever gone, replaced by one nation indivisible, the old South dead. However much nostalgists miss it, and lovers of freedom hated it, the antebellum South is beyond reviving. War can change things, sometimes definitively. It did the Union, even though it now goes by the same name.

Many and complex reasons are still adduced by historians who, in the way of historians, can be relied on to come up with still another explanation for the Civil War in every generation. For it remains the central tragedy of American history. It was left to one of those earlier statesmen, to sum up in a few words the cause of that irrepressible conflict. Abraham Lincoln did it in his second inaugural address. With its concise clarity and Biblical overtones, it still echoes and re-echoes in time because of its eloquence and understanding -- and simplicity:

"On the occasion corresponding to this four years ago, all thoughts were anxiously directed to an impending civil war. All dreaded it -- all sought to avert it. ... Both parties deprecated war; but one of them would make war rather than let the nation survive, and the other would accept war rather than let it perish. And the war came."

Some conflicts are as simple as they are terrible. In today's continuing, and surely to be continued, war between Hamas and Israel, one party would make war rather than let a nation survive, while the other would accept war rather than let it perish. Which is why so many Israelis seem to recognize that this is all part of one long existential war, that is, a war concerned with their nation's very existence. And that some conflicts will not be settled till they are settled by force.

That is the irreconcilable, the undeniable, obdurate essence of a war that may make no sense from afar, but whose outcome, in this round or any that follow, makes all too much sense to both sides. To one, nothing but the obliteration of the other would be an acceptable outcome of the whole, long struggle. Hamas' very charter, its constitution, its founding document, says so. The other, Israel, feels its very survival is at stake, and is not about to cooperate in its own extinction. And the war came.