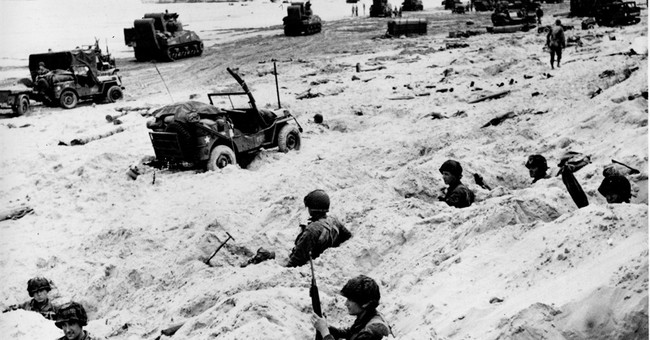 A scrap of childhood doggerel has become only a memory of a memory by now. They say that's the way the little gray cells record and re-record memories, taping over the previous one and changing it here and there each time it's rehearsed.

By now that little ditty has acquired the patina of a folksong you might have learned at your mother's knee, like "O Susanna." But the sing-song lyrics keep coming back every D-Day.

Was it Cab Calloway or Spike Jones or some other minor but colorful songster who recorded that scrap of song in the wartime Forties? My Internet search for the words has come up empty, but there's no forgetting them, or at least the words I now remember or imagine. Any more than you would forget a promise that help is on the way and growing ever nearer, like the Lord of Hosts himself, about to tumble down the walls of Jericho:

Hitler got the heebie-jeebies,

He knows we're comin', but

He don't know where

and he don't know when,

But we made our reservations--

And on this day 70 summers ago, D-Day, the Sixth of June, we came. Like an avenging army -- and navy, air force, marine corps, coast guard and everything else. Terrible as an army with banners, as the Good Book says. And we did not come alone. There were GIs and Tommies, Free French and valiant Poles, the Canadians and Scots and remnants of every captive people of Europe.

Has there ever been a greater or more American force than the one assembled that day? Or a more eclectic one? They might as well have been a cross-section of the country: New England bluebloods and conscripts from Southern chain gangs, New York Jews and good old boys from back home, slum kids from the tenements and scions of Roosevelts, small-town boys from the Midwest (one named Eisenhower) and the corpsmen and nurses and gravediggers prepared to deal with the mountain of casualties about to come. Black and white we came, and every shade in between, all converging on those beaches that would soon be raked by gunfire and covered by the acrid smoke of artillery barrages.

A world in arms was out there approaching the French coast. And it was about to surge, hurling itself against Hitler's vaunted Atlantic Wall, his unbreachable Fortress Europe that would be breached that day by a tide as unstoppable as the spirit of liberty itself. However long suppressed, light was about to come back to Europe, The long night of barbarism was about to lift. And let freedom ring.

There was no stopping such an armada, the greatest the world had ever seen. It covered the Channel as far as the eye could see, a great host come to incarnadine the multitudinous seas with its blood, prepared to turn the green one red. At last, a saga worthy of Shakespeare -- and Cab Calloway.

Old Hitler's got the heebie-jeebies,

He knows we're comin', But he don't know where

and he don't know when,

But we done made our reservations,

The code words had already gone out to the French resistance over the BBC -- a few lines from Verlaine's "Chanson d'Automne," Autumn Song. Les sanglots longs/ Des violons ... The long sobs/ Of the violins/ Of autumn/ Wound my heart/ With a monotonous languor.

It was the signal that the time had come. The invasion was about to begin, and the message was clear: Rise up and strike! The gliders had been dispatched from England's green, green fields to fly motorless over the French coast lest the enemy hear them and be warned. They were to plow through the hedgerows of Normandy and disgorge their fighters. The first paratroops were landing behind the enemy lines to prepare the way. And then -- and then the flood tide of freedom would descend on the beaches, God be with them.

The first wave of Americans landed in the wrong place on Utah Beach, luckily. For they came ashore on an only lightly defended stretch of the beach. Their commanding general, Theodore Roosevelt Jr., was his father's son. Realizing they were a mile off course, and with the second wave already coming ashore, he forgot about finding the proper site and just pressed inland. "We'll start the war from right here," he decided. And his rough riders did. They were soon up the beach and driving into France with artillery and armor. The liberation was under way.

The boys at Omaha Beach weren't so lucky. It was a death trap, lined with obstacles, the heavy guns in the impregnable bunkers pre-sighted and murderous. Well, supposedly impregnable. At 13:35 hours 6 June, the German 352nd Division was able to tell High Command that the American assault had failed and been thrown back into the sea. Only the Americans didn't know it. We kept on coming. And the German units on other sectors of the beach were reporting attacks -- from their rear. Somehow the Americans had got through, and behind them. The invasion hadn't failed. It only should have.

The Americans were already clambering up the cliffs. Amid the smoke and fire, the dead and wounded, rising and advancing, our flag yet waved. The Allies had landed. To stay.

By the end of the day, more than 150,000 men were ashore at Gold, Juno, Sword, Omaha ... the beaches were being secured, the wounded being evacuated, the bodies collected, and the breakout was about to begin. Battle after battle was yet to come, and more dead would be piled high, but the Sixth of June, D-Day, was over. And by dawn's early light back home, bells were ringing all over America. We'd done made our reservations and were movin' in.