The Pilgrims and Us 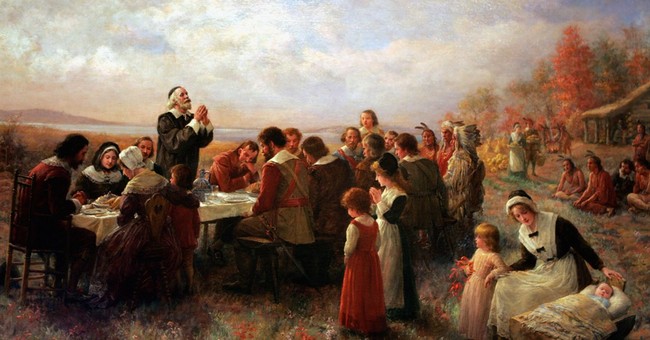 Don't anybody be shocked, but those Pilgrims being celebrated today weren't just cardboard cut-outs. They were part of the Religious Right. Or maybe the Religious Left, since the Pilgrims emphasized communal organization as much as they did individual rights. But right or left, the Pilgrims were definitely religious.

That is, they believed in something beyond themselves. Something spiritual but worldly, too. Not a stained-glass kind of faith but beliefs that impelled sacrifice, risk, commitment ... movement. And not just in the metaphorical sense. They would have to abandon their roots, forget all they had known, resettle, become strangers in a strange land. It happens. Go where I will send thee. No questions asked.

So they left Mother England for the Netherlands, where at least they could be assured of toleration. Perhaps too much of it, for they saw their children adopt the ways of the stranger. They would have to move again a decade later, this time removing not to one of the world's more advanced countries at the time, but across a treacherous ocean to a wilderness where savage beasts roamed.

Politics and religion were not just debating points for the Pilgrims -- or for the Puritans who would follow and succeed them. Their ideas were their guides, their compasses, their imperatives. Which may be why their thanksgiving became the American one. The well-indoctrinated Southerner knows the first Thanksgiving took place in Virginia, but it was the feast held by the Pilgrims and the Puritans that became the national holiday.

Why? Because the Puritans' beliefs were engrained in the American psyche and character in a way that religion in the proper Southern style never was. So the Puritans were able to achieve a seamless symbiosis of spirit and action that remains a part of the American current -- whether economic, cultural or political. Theirs was a dynamic faith. The Pilgrims' ideas became American ideas, and their dream of a city upon a hill an inseparable part of the American Dream.

Yes, believe it or not, there was a time when the American Dream didn't mean only an income bracket. There will be such a time again. Because this pilgrim faith has been planted deep, and there's no telling when and where it will crop up. See the civil-rights movement of the last century, or the pro-life movement of this one. If you ever think faith has disappeared, just look at the faces of new immigrants.

These wanderers and sojourners in more than a metaphorical sense, these pilgrims, couldn't look at a field, a crop, a storm without seeing in it the "Wonder-Working Providence of Zion's Savior in New England," to quote the title of a popular book of their time. And they had to bear witness to it. They felt called upon to attest to it every day, every hour. And the greater their trials, the greater their faith, and their articulation of it.

There is something about being a stranger in a strange land that makes one aware. Aware of differences and similarities, possibilities and dangers, and, perhaps most of all, aware that things not only change but can be changed.

Listen to William Bradford, second governor of Plymouth Colony and author of the "History of Plymouth Plantation." Here is how he explained why the Pilgrims chose to leave the good and hospitable country of Holland, and see if you don't detect a familiar theme:

"That which was more lamentable, and of all sorrows most heavie to be borne, was that many of their children, by ... the great licentiousnesse of youth in that countrie, and the manifold temptations of the place, were drawne away by evill examples into extravagante and dangerous courses, getting the raines off their neks, and departing from their parents ... tending to dissolutnes and the danger of their soules, to the great greefe of their parents and dishonour of God. So that they saw their posteritie would be in danger to degenerate and be corrupted."

You can hear that same message today, especially in the black church. Perhaps because it is the black family that has borne the brunt of our mod, oh-so-advanced culture with its own "manifold temptations." That message was given a name some time ago, and it's too bad it became a snap political phrase: Family Values.

No, Daniel Patrick Moynihan wasn't the first to point out what happens to a society when young, unfettered males are left to form their own Lord-of-the-Flies society.

Anybody who thinks this country doesn't have a politics of meaning hasn't read the Puritans, who may have been the most articulate immigrants ever to influence the course of American ideas, and therefore the course of American events. Daniel Boorstin, the American historian, described the Puritans as "the first, and perhaps the last, sizable community in American history to import from Europe a fully developed and explicit social dogma, and to try to live by it on this continent."

Thanksgiving isn't only about giving thanks; it's about the struggle and sacrifice that precedes thanksgiving. It's about the willingness to risk all on one's faith. Without all that went before, Thanksgiving would have no meaning. The Pilgrims, to quote from the beginning of the official record of Plymouth Colony, "knew that they were pilgrims and strangers here below," and were journeying in their souls, too. They understood that the outward should be a reflection of the inward.

One wonders how those first pilgrims in this still new world, with their modest beginnings and immense faith, would look upon all that has been wrested from the wilderness they found.

The Pilgrims could always find reason for thanks, and they were never unimpressed by material achievement. Seeing what has been wrought on these shores, would they proclaim a thanksgiving?

Or, looking beyond outward things, would they just be puzzled? Would they want to know why there are no more Pilgrims and Puritans? Why providence gave way to that pride which always goeth before a fall? Would they wonder what the Pequot were doing running a gambling casino? Something tells me they would not be at all surprised at how pride in what had been accomplished had undermined the faith they championed. What would they make of the unending, transient images on television? Peering inward at the American soul, would they be chagrined to find only a reflection of outward things?

They were a sophisticated bunch, Pilgrims and Puritans. They would know there are at least as many questions as answers. But they would still bear witness, and proclaim feast and fast days. They were not a people given to despair but to action.

If the Pilgrims examined themselves continually -- an American habit long before psychoanalysis and public opinion polls became national preoccupation -- they did so in order to act on what they found.

A people that traces its heritage back to the small group that left Delfshaven that uncertain day in 1620 cannot have forgotten all the simplicity and strength that goes with being a pilgrim, or the self-awareness. Or the concern for posterity.

Strange: The more we talk about the future, and the more we are obsessed by it in this internetted age, the less we speak or think of posterity. The word itself grows rare. It has such an old-fashioned sound now, much like Pilgrim or Puritan.

Posterity? What a quaint word. As if it weren't what the future is all about. The Pilgrims understood some things we seem to have forgotten, or remember only on ceremonial occasions. But with each passing Thanksgiving, it becomes clearer that it is time to set sail by an older and truer compass. And, like the Pilgrims, to begin again.