Church, State and The Supremes 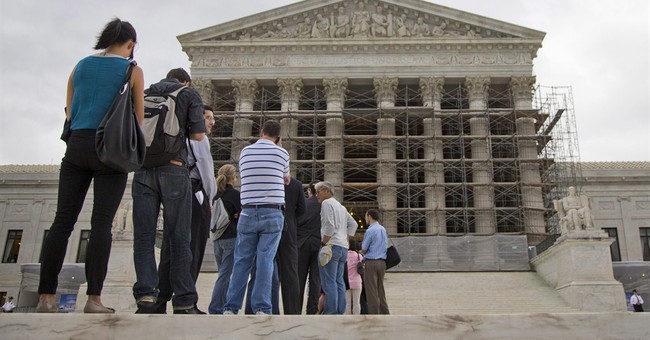 It's not just the American economy that has a deficit problem but American law. Call it a deficit of common sense.

Here's the latest, irritating and all too common example of this recurrent problem, even plague. According to an appellate court up in New York state, prayers offered by private citizens at the invitation of a town council in Greece, N.Y., represent an unconstitutional establishment of religion.

Why, for Heaven's sake? According to that court's "reasoning," the municipal government violated the First Amendment, which both (a) guarantees freedom of religion and (b) forbids government to establish one. Which is quite a trick, but both principles can be respected, and have been over the years -- by exercising that most uncommon of qualities in the law, common sense.

The result has been a great success: America has nurtured one of the most religiously tolerant yet religiously fervent societies in the world. We've been able to achieve that feat because courts and legislatures have kept their hands off religion -- rather than decreeing just how much of it to allow, which is always a mistake.

Now the Supreme Court of the United States is being asked to police prayers offered at a public meeting in Greece, N.Y. (pop. 96,095). The court should do no such thing. But that is the course some of the Supreme Court's less thoughtful members suggested when this case came before them. Why doesn't this town council, one justice suggested, just limit those giving the opening prayer to some nice, inoffensive sentiments that all (or at least most) citizens could approve? Call it generic prayer.

The term for this approach is civil religion, which has its place on ceremonial occasions in multireligious societies. It is the course the greatest of multireligious empires -- Rome -- followed so long and so successfully. To quote Gibbon's history of that empire's decline and eventual fall: "The various modes of worship which prevailed in the Roman world were all considered by the people as equally true; by the philosopher as equally false; and by the magistrate as equally useful. And thus toleration produced not only mutual indulgence, but even religious concord." It sounds familiar, at least to an American.

As useful and even satisfying as civil religion can be on ceremonial occasions -- think of the last community-wide Thanksgiving service you attended, or the ecumenical prayers delivered at a presidential inauguration -- the kind of civil religion on offer at such occasions should not be confused with the intimate, personal, deeply felt kind. The kind that an American government should never -- never! -- lay hands on. When it does so, government always leaves its fingerprints behind, not to mention simmering resentments. And deep divisions. Which is why the best guide American courts can follow when the subject before them is religion may be the simplest: Hands Off!

A noted political philosopher and Irish barkeep, Finley Peter Dunne's fictional Mister Dooley, put it this way: "Religion is a quare thing. Be itself it's all right. But sprinkle a little pollytiks into it and dinnymit is bran flour compared with it. Alone it prepares a man for a better life. Combined with pollytiks it hurries him to it."

In more elevated prose, an eloquent observer and analyst of Democracy in America back in the 1830s, a Frenchman named de Tocqueville, noted that both "the spirit of liberty" and the "spirit of religion" not only co-existed in this New World but thrived in conjunction with each other. Because each kept a respectful distance from the other. While in Europe, where church and state were joined, they became bitter antagonists -- and their mutual enmity a threat to the public peace. Which is why each should leave the other very much alone. It's also why the Supreme Court of the United States shouldn't be vetting the prayers offered by citizens at a town council meeting in upstate New York, and deciding which are constitutionally kosher and which aren't. Like some kind of secular sanhedrin. Talk about an unholy spectacle.

The innocent citizens offering those prayers aren't public officials setting down the law or speaking for the State. Indeed, they may be speaking to it as well as to their own God, and they have every right, even duty, to speak as their own conscience dictates.

If their prayer, their free exercise of religion, offends others, well, there's another part of the First Amendment that would seem to cover that eventuality, even probability in a free country. It's the part of the amendment that guarantees freedom of speech and of the press. Those who object to the contents of a prayer offered at a public meeting, or even object to a prayer's being offered at all, can express their objections in public, too. By making a statement of their own, or writing a letter to the editor. Rather than try to gag the rest of us. It's the American way.

Let everybody have their say -- and their own prayers. This is called tolerance, and it's the mark of a society that is both free and stable. Let freedom ring! No society ever prospered by suppressing either different opinions or different prayers. However tempted the Supreme Court of the United States may be to decide which prayers are acceptable and which aren't, it is a temptation no court -- or any other political body -- should yield to in a free society.

The questions this case raises should never have gotten to the Supreme Court of the United States or any other, they are so simple and fundamental. Which is why the most sensible observation from any member of the court when it heard this case came from Her Honor Elena Kagan, who noted during the hearing: "Part of what we are trying to do here is to maintain a multireligious society in a peaceful and harmonious way. And every time the court gets involved in things like this, it seems to make the problem worse rather than better." Amen and Selah. Here's hoping her colleagues were listening. And will stay out of this briar patch.

Yes, the study of the law sharpens the mind -- but too often by narrowing it. And those learned in the law alone may not learn self-restraint. Or judicial restraint.

The separation of church and state in an ever-changing society can be a complicated matter. The wall between the two that Thomas Jefferson mentioned in his oft-quoted letter to the Baptists of Danbury, Conn., has shifted this way and that over the years. That wall of separation has followed a serpentine course, sometimes veering one way, sometimes the other. Maintaining it has not always been simple, but this case is. The essence of the high court's decision should be simple, too: Let folks pray. In their own way invoking their own God -- or none. To use less than stained-glass language, let 'em take their best shot. The rest of us can stand it. We're grown up, or should be. Maybe even grown up enough to know that the best way to foster tolerance in a free and religiously diverse country is to practice it.