The Beauty of Simplicity 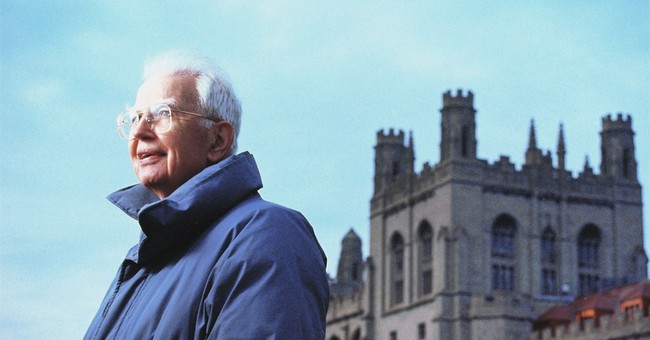 How simple a great idea can be. Once a great thinker explains it simply. A thinker like Ronald Coase, the economist, teacher and sage who has just died at the remarkable age of 102.

The man could explain how and why today's American economy is so different in structure from the one I grew up with from the 1950s well into the 1970s, which was dominated by Fortune 500 companies and household names like Ford, GM, GE, DuPont, and Boeing.

Why were all those behemoths created? Ronald Coase explained it simply in his classic paper, "The Nature of the Firm," which may be the best known and most frequently cited treatise on economics since Adam Smith was writing.

Those corporations were formed, to use Coase's phrase, to save "transaction costs." Or how much it costs -- in money, time and general hassle -- to conduct a business. Or create an industry. Or just turn out a product. Especially one with a lot of moving parts.

Suppose a Henry Ford or Thomas Edison or Andrew Carnegie -- name your own favorite captain of industry -- had had to hire somebody different to provide every part of a Model T or a steel empire. It's so much more efficient to combine all those operations in one company. It saves, yes, transaction costs. That's the nature of the beast, or rather "The Nature of the Firm." So these companies formed -- and grew and grew.

Visiting an insurance company's headquarters in the 1950s, or a newspaper's for that matter, was to be greeted by a sea of desks, complete with one each clerical worker -- little cogs in the great corporate machine.

It was assumed that many of us would spend a lifetime with one company, rising (or falling) through the ranks. It was the age of the Company Man, and there was a distinct IBM man as surely as there was a Coca-Cola or New York Times or J. Walter Thompson man. Or (tailored) woman.

"Mad Men's" Don Draper of Sterling Cooper Draper Pryce didn't come from nowhere but out of that buttoned-down era and world. The world of "The Man in the Gray Flannel Suit" and "The Lonely Crowd," to recall a couple of popular book titles at the time.

What ever happened to all those corporate giants? Many are still around, if diminished in size and influence, but a great sea change has occurred. By the 1990s, those Fortune 500 companies, pillars of the American economy for decades, had cast off 3 million jobs over a decade of downsizing. Change is stress, and that was a big change, not just in the American economy but the American psyche.

A later book Ronald Coase helped write, "The Dynamic American Firm," would offer some needed perspective on that big change:

"Like 'de-industrialization,' the rapid rise in business services and self-employment over the past several years has set alarm bells ringing in enlightened centers of thought. 'In the future,' one displaced executive told Time magazine, 'we are going to be moving from job to job in the same way that migrant workers move from crop to crop.' Perhaps. But unlike the migrant worker, today's corporate refugee, equipped with a personal computer, printer, copier and fax machine -- all purchased for about $7,000 -- can earn a good living toiling in the comfort of his, or her, home. That is so because the information revolution has greatly reduced transaction costs -- for big firms and small contractors alike."

Ronald Coase's thoughts on American economic organization, blessedly theory-free because they were based on studies of how American businesses actually make decisions, were almost as influential as his 1960 essay on "The Problem of Social Cost," which has been called the most cited law-review article in history. It's an incisive look at how inefficient government regulation, taxation, subsidization and litigation can be when compared to negotiation between competing interests.

His now well-known example: The case of the farmer whose land is being damaged by emissions from passing trains. Coase's solution: not a penalty or fine or still another lawsuit or 10,000-word bill in Congress, but a simple deal, one that benefits all concerned. Let the farmer agree not to cultivate that vulnerable part of his land in return for a payment from the railroad to cover whatever profit the farmer would forgo by letting it lie fallow. Talk about reducing transaction costs -- for the farmer, the railroad, and the tax-paying public. A good deal all around except maybe for the lawyers, who are definitely a surplus crop these days.

Naturally enough, ideas like Ronald Coase's -- great ideas simply explained -- deeply offended his colleagues in academe. He was denied promotion at the University of Virginia till he left for a school that could appreciate him and great ideas in general. (The University of Chicago, of course.) At least since Jonathan Swift's time, it's been easy enough to spot a scholar with talent or imagination, or just a capacity for original thought: "When a true genius appears, you can know him by this sign: that all the dunces are in a confederacy against him."

Ronald Coase understood the beauty of simplicity, which seems to elude the kind of "planners" who strew obstacles here, there and everywhere. Like all the stumbling blocks they've put in the way of charter schools, the most promising innovation in public education in years. Or consider Obamacare, which is anything but simple. One more part of that gigantic mechanism seems to crash, stall or somehow fail every day.

When a mathematician cuts through all the complexities in an equation, his solution may be described as elegant. In that sense, Ronald Coase was an elegant thinker.

According to the citation when he was awarded his Nobel in 1991, "Coase may be said to have identified a new set of 'elementary particles' in the economic system." He himself would only smile at such a claim. "I've never done anything that wasn't obvious," he once said. Maybe so -- but it wasn't obvious until he pointed it out.