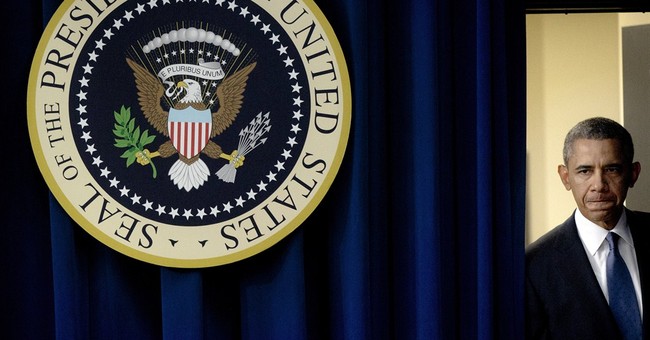 It's all settled. Russia and the United States have agreed that Bashar al-Assad's impressive arsenal of chemical weapons will be inventoried, secured and destroyed by the middle of next year, give or take a few months. Or maybe a few decades if appeasement bears its usual poisoned fruit.

Naturally the deal doesn't cover any and all canisters of sarin Brother Assad may already have used to assure a painful and paralyzing death for hundreds of his own subjects -- from oldest to youngest regardless of age or sex. (Who says the man is not an equal-opportunity killer?)

There's no need to go into bothersome detail at this auspicious point, like whether Assad has agreed to this deal he may or may not renege on even if he signs onto it. But why let any such doubts, or even deep-seated revulsion at making another bargain with Evil, interfere with the celebratory rhetoric?

To quote our president, who rapidly becomes interchangeable with the Russian one, the agreement reached at Geneva this past week (yes, the same Geneva where the League of Nations used to meet to guarantee world peace), is "an important, concrete step which could end the threat these weapons pose not only to the Syrian people but to the region and the world."

Pop the champagne corks. At such a happy time, the image of Molotov and Ribbentrop raising their glasses to the Nazi-Soviet Pact in August of 1939, which made the Second World War certain a week later, comes back -- like a recurrent nightmare. Or the pictures of the historic summit in 1972 between Mao Tse-tung/Chou En-lai and Richard Nixon/Henry Kissinger toasting each other.

But most emblematic of all is the not so fictional final scene of George Orwell's "Animal Farm" as Comrade Napoleon and his fellow pigs celebrate their new partnership with Mr. Pilkington and friends. An innocent bystander peeking through the window might look from pig to human and back again and not tell any difference at all between the High Contracting Parties, pig and human. How little Realpolitik and its all too real results have changed over the years.

Now it's Peace in Our Time again. And it doubtless will be followed by the same old war. The peace conferences will go on and on, and United Nations resolutions will follow one after the other -- as surely as the bodies are piled higher and higher in Syria, and the refugee camps inside and outside that tormented country continue to go from full to overflowing. And the refugees will be the lucky ones. The others can suffer no more.

Naturally, there'll always be some spoilsport who'll point out that men cry Peace, Peace! when there is no peace. (Jeremiah 6:14) No one listened then, either. Till it was too late.

All that anybody really needs to know about Washington's latest deal with the Kremlin is that Fidel Castro thinks it's great. Cuba's elder statesman-and-tyrant gave it his unqualified blessing, though he awarded all the credit for it to the senior partner in the nascent firm of Putin & Obama, Ltd. (Resets Our Specialty). At 87 years of age, proving that the good die young, El Comandante made the agreement sound like the best thing since sliced bread, or at least the Soviet bloc of late and unlamented memory.

Meanwhile, this latest act of obeisance from truth to power evoked a slightly different response from those fighting for a free Syria. To quote a rebel commander in beleaguered Idlib, one of the Syrian freedom-fighters' strongholds, this agreement with the Russians proves that the United States no longer cares about helping Syrians, but is leaving them to the mercy of a rapacious dictator.

Welcome to the club. For it has long been observed around the world that it may be dangerous to have the United States of America as an enemy, but it can be fatal to have us as a friend. Just ask the last shah of Iran. Or lots of others. For the world is littered with little countries we have abandoned. There was a time when all of Eastern Europe consisted of nothing but captive nations. Or ask the Vietnamese. Or the Lebanese. Or the Israelis, who surely remember the run-up to the Six Day War, when they should have learned, if they hadn't realized it before, that they can depend only on themselves.

Israel has already had to act alone to destroy one developing nuclear plant after another in Syria without arousing undue attention in world capitals, including Damascus itself. It's an open secret by now that only Israel may have the gumption to save the world from the specter of Iran's mullahs' acquiring their own Bomb, just as North Korea's ruthless dictatorship did. While this country forever tried to appease that brutal regime.

Or ask the Kurds, who by now have been abandoned more than once by American secretaries of state like Henry Kissinger, that great architect of Detente, a period Barack Obama proposes to resurrect under the name of Reset.

The only thing that seems sure about negotiating peace in Syria, aka The Long Stall, is that it's going to be a long, drawn-out process. Not unlike being drawn and quartered.