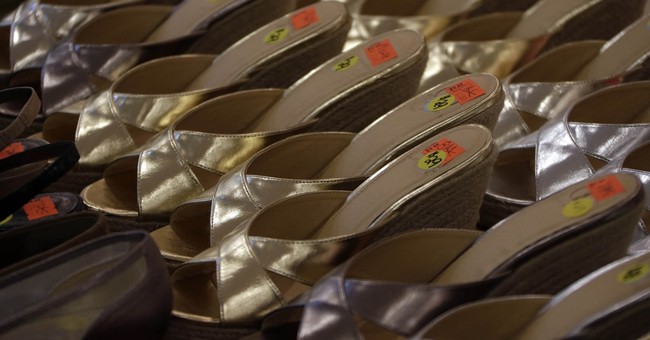 The old man had long ago given up fixing shoes and tried other businesses, always at the same location, and usually with the same customers. But he never found any other work that gave him as much satisfaction as putting a couple of nice new leather soles on a pair of old uppers. Or putting a pair of Cat's Paw heels on shoes that still had a lot of wear left in 'em, as he would assure the customer. He did it neatly, surely, carefully -- to last. And he guaranteed his work. He knew lots of these folks in from the country on a Saturday to buy provisions didn't have money to spare, and he hated waste. The same went for those from the Bottoms, the black neighborhood not far away.

He loved the feel and aroma of new leather, the grain in the old. He was seldom as happy as when he could hold a pair of weathered shoes in his hands, turn them over and over, feel the tread, admire the workmanship. Sometimes he could even name the local shoemaker who'd done the job. Each had his own, recognizable pattern -- a broken stitch, the way he cut the leather, even the telltale marks of the individual, well-worn shoe last or Landis stitcher.

Labor omnia vincit. Labor conquers all. The old man had no Latin, but he did have some Hebrew, and would have known that the Hebrew word for labor and worship are the same: avodah. He worked the same way he prayed: with dedication, concentration, and above all, intention. It showed. He was not a learned man, much as he would have loved to be, but in those two things -- work and prayer -- he came into his own.

He was not a learned man, never having got past the third grade. He'd arrived in America a stranger in a strange land, even if it was one he loved. He would occasionally describe someone he knew in a respectful, almost reverential, phrase -- "he's an educated man" or "she's an educated woman" -- that combined admiration and envy.

His boys could remember those rare occasions when the old man lost his temper. Once he threw a poorly repaired pair of shoes against a wall in his fury. What a sloppy waste of good leather! What a waste of time and the customer's money!

In his old age, he was unable to contain his contempt when he would drive past one of those glitzy new shoe stores that sold cheap, shiny imports -- the cardboard kind sure to come apart in the first rain. He hated them. They were an insult to the whole trade.

The old man took poor workmanship as a personal affront. Labor wasn't a factor of production to him, it was a calling -- and a refuge.

The old man wasn't much on theory, but he understood value received, good will, repeat business, and, above all, the importance of trust between people -- customer and merchant, worker and boss, lender and borrower. To him, commerce was friendship.

All the talk he heard about labor and capital, first from agitators in the old country, and then as the standard fare of politics in this one, seemed textbookish to him -- not really useful like a good, solid pair of shoes.

He had a more personal concept of how economics worked. He thought of the economy as a web of personal relationships: with his customers; with the workers he hired and trained and sometimes had to let go; with the banker he depended on to get him started in his various new ventures, some of which went well and some of which didn't; with the landlord who collected the rent from him, and with his own tenants after he began buying a piece of property here and there, and building some rent houses. He liked his houses kept up, the lawns mowed, so they would "look like something," as he used to say. Like a good pair of shoes.

Much like most Americans, the old man was too deeply involved with labor and capital to think in those terms. Instead he thought in terms of people and whether their work -- and their word -- was good.

When he died, people the family couldn't remember, maybe had never even seen before, showed up at the house to pay their respects. They'd all tell pretty much the same story -- how he'd given them credit when they needed it, or a little help when they were trying to get started.

He liked giving people a start. There was Henry Johnson, for instance, whom he'd hired as a boy -- and taught how to fix shoes. And who would lose his legs soon after he started work. (A railroad accident. He'd been in a hurry one day and decided to hop between the cars of a long freight rather than wait till it passed. Bad idea.) The old man had stuck with him, and Henry in turn would stick with him. For the next 50 years, mastering one new skill after another.

His apprentice would grow old with his boss, teach him as much he'd learned, and die two weeks before the old man himself. The family smiled knowingly when they heard Henry was dead. They knew he'd just gone ahead, as usual, to scout out the territory.

On this Labor Day, a great deal will be said in the usual press releases, but none of it will be more eloquent than work done well. To me, two new soles on a pair of well-shined shoes still say more than all the Labor Day speeches ever written. And business still isn't just business -- as in "Business is business!" -- but friendship.