The Way it Was 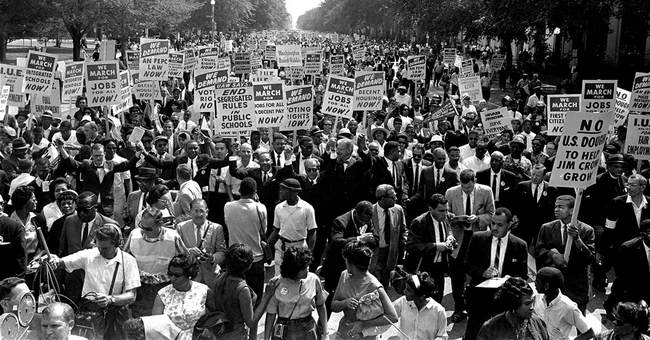 August 28, 1963. I remember it well. And how wrong I was to be worried about how it would turn out. Hundreds of thousands of protesters massed on the National Mall in the sweltering heat of late August in Washington? Visions of the nation's capital in flames danced through my head -- a spectacle that would set the civil rights struggle back another hundred years. For despite all the tough talk about how the only language these racists would understand was violence, I knew Americans reacted, strongly, against any protest movement that resorted to it. Then came the march itself, and . . . .

How could I have been so wrong? Protesters? These folks, black and white together singing We Shall Overcome? They could have been going to church in their Sunday best. Look at the faded old back-and-white television pictures of the march: the men in coat-and-narrow-tie, their snapbrim fedoras firmly in place. The women decked out in their matronly best, topped off with those wonderfully floral hats that completed the go-to-meetin' ensemble.

I don't think I ever saw Mrs. Edna Mays of Pine Bluff, Ark., without hers.

Mrs. Mays was the founder, sponsor and guiding spirit of a young people's group that had a name like the Negro Youth League. She would invite me to talk to one of its Sunday afternoon meetings now and then. The group seemed devoted mainly to the cultivation of good manners and elocution, no mean arts, and which haven't grown any more abundant since her day. Quite the contrary.

Mrs. Mays once gave me an official-looking certificate proclaiming me an Honorary Negro Father. The term Negro is declassé today, but I was kind of proud of my certificate. Still am. It is no small thing to be a father of any ethnicity. Now all these Negroes -- and a lot of us honorary Negroes, too -- were gathering by the hundreds of thousands in the nation's capital.

I looked at the television coverage and was ashamed of what I'd been worried about. These people hadn't gathered to threaten the Republic but to fulfill it. And they were supposed to be threats? Where could I have gotten such an idea?

I knew where. I'd spent too much time in a graduate seminar working up a paper on the Bonus March of 1932, when veterans marched on Washington to demand their World War I bonuses in the midst of the Depression. When they grew unruly, the president at the time -- poor Herbert Hoover -- told his chief of staff, one Douglas MacArthur, to disperse them. But not arm his troops.

Instead, the great general ordered a full-scale attack. For even then he was given to fatal flights of hauteur. One of his subordinates, a major named Patton, led a cavalry charge against the vets, complete with tanks and drawn sabers. The infantry advanced with bayonets and gas masks at the ready. (Another of the general's subordinates, a Major Eisenhower, would say that, as understudy to MacArthur, he'd studied dramatics for years.) Fires broke out, little children wept and cried.

The chaotic scene was just what a dedicated band of Communist infiltrators had hoped for, picturing the Bonus March as this country's own October Revolution. It was not to be, Americans being Americans and Communists being the deluded lot they are.

A lot of Americans had feared the worst when the March on Washington was announced, including the one in the White House. A concerned John F. Kennedy summoned the march's nominal leader, gray-headed A. Philip Randolph of the Brotherhood of Sleeping Car Porters, and asked him to call the whole thing off. Mr. Randolph, the very picture of dignity and restraint, a veteran union organizer and Shakespearean actor (talk about good manners and elocution!) told the president in the most civilized, elevated way: No Dice.

The choice by then, he explained, "was no longer whether Negroes came to Washington or not," but "between a controlled and nonviolent demonstration and an uncontrolled and violent one." The New York Times, prescient as ever, foresaw "a day of siege." Among all the cries of alarm and general feeling of foreboding, it was left to an always unassuming newspaper columnist named Murray Kempton to sum up the historical -- and moral -- meaning of the great march:

"The most consistent quality of white America's experience with the Negro is that almost nothing happens that we--or perhaps even he--expects to have happen. Faithful to that tradition, Washington waited most of the summer for the avenging Negro army to march on Washington for Jobs and Freedom; what came was the largest religious pilgrimage of Americans that any of us is ever likely to see."

The naysayers, the criers of doom and destruction, the fearful and panicky who believed every racial stereotype of the Negro as wild savage ... all were confounded. And so was the kind of white guilt that fully expected to reap the harvest of revenge that the Negro's treatment had sown year after year.

A. Philip Randolph called it in his opening remarks to the great crowd: "We are not a pressure group ... we are not a mob. We are the advance guard of a massive moral revolution."

This elder statesman of American labor, the aging leader of the most dignified of black professions -- the sleeping car porters with their own code, dress and dignity -- explained that the object of this great demonstration was to "imbue the American colored man (with) a sense of his own responsibility and power." Which is just what it did.

It was the black press that got it right. To quote the Los Angeles Sentinel, "the professionalism displayed by the Negroes in this instance proved a maturing Americanism which few outsiders have previously credited to our race." The novelist James Baldwin summed up one effect of the great march: His race was "no longer at the mercy of what white people imagine the Negro to be."

Bayard Rustin, the great organizer of victory, the man behind the scenes and behind A. Philip Randolph's nominal leadership of the march, the invisible man who made a point of never taking the spotlight, would later chortle: "No one believed we could bring all those Negroes to D.C. without someone getting cut." You could hear the stereotypes collapsing all around.

The language used to describe the marchers at the time -- Negroes, the colored man -- has changed over the past 50 years, and not necessarily for the better. The truth that now quaint language captured hasn't changed at all: The march was a spiritual victory. An act of auto-emancipation. Shape the spirit and all else will follow. That's the moral of this story: Never underestimate the power of words -- or of the Word.