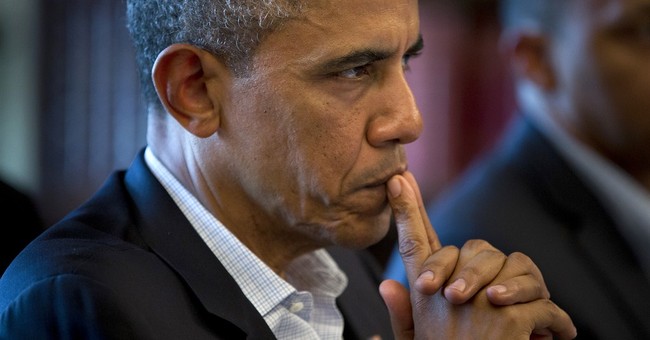 Here we go again. The most impressive, or maybe just depressive, aspect of the current debate over what to do about Syria is the air of unreality about it. Words, words, words about Syria -- but only words, no action -- filled the daily news and diplomatic communiques out of this week's G8 Summit. The extensive coverage of the summit came with the usual pictures of World Leaders solemnly conferring. Not to mention the usual doses of sage commentary churned out by the usual foreign policy wonks.

There was something decidedly 20th century about the images out of this G8 meeting. Update the photographs and the technology used to transmit them, and they could be old black-and-white halftones of Distinguished Leaders meeting on the verge of World War Act II at Geneva or Munich. ('PEACE IN OUR TIME!')

This year Barack Obama and Vladimir Putin were pictured in their coats and ties at Lough Erne in Northern Ireland. The topic: What to do about Syria? "We do have different perspectives on the problem," to quote the ever diplomatic Mr. Obama, and the purpose of his confab with the Russian leader this week seems to have been how to paper over those differences.

There's also quite a difference between the Kissingeresque calculations of these leaders' Realpolitik and the bloody realities on the ground. The millions who have been endangered and uprooted by the spreading crisis in Syria don't make Major Addresses or jet across oceans to international summits. They just get to bleed and cry and mourn.

Back in the summer of 2012 there was an unforgettable photograph in the news -- a picture of a Syrian mother carrying her wounded boy, a Pietà for our time. Compare that image it to the group picture of the Movers and Shakers at the G8 summit this week. There you have the difference, the big difference, the yawning gap, between those who make policy and those who pay its price. It's the difference between those who make the decisions and those whose fate is determined by those decisions. Or rather the decisions an apathetic American president fails to make. The effect of his indecision? He only prolongs the pain and suffering there, which grow ever greater.

This gap between words and deeds can't be filled with the glib talk of the Charlie Rose Show or the Sunday morning Week in Review specials. Or the articles in Foreign Affairs that speak of the struggle over Syria as if it were some kind of chess game in which the pawns are just pushed around the board and never groan in agony.

The catch phrases of the strategists and Big Thinkers, the George Kennans and Walter Lippmanns of our time, may have changed slightly since Korea and Vietnam, but the spirit of the discussion is much the same. Or rather the spiritlessness. Vague, abstract, decently distanced from reality.

Will this administration's decision to arm the rebels in Syria, at last and only minimally, balance the Syrian dictator's steady supply of weapons from Russia? And his foreign legion provided by Iran through its wholly owned terrorist subsidiary, Hezbollah, whose guerrilla fighters may be turning the tide of battle in the tyrant's favor even now.

There is now talk of Limited No-fly Zones in Syria just as there once was talk of Graduated Escalation and Rules of Engagement in Vietnam. The lyrics may be different but the beat is the same -- that of a long, languorous monotone going nowhere except deeper into despair. No one now dares call it the War Against Terror, at least not in this president's circle. He prefers the sanitized phrase Overseas Contingency Operations, which must be a great comfort to the next of kin.

The difference in terminology may be only verbal, but the dying is the same. The late unpleasantness in Korea wasn't officially a war either, but the Korean Conflict -- as if that made any difference to the grunts and refugees. In this war by another name, candor would seem as absent as direction in American foreign policy.

It's all enough to take some of us back to the Nixon years, when the object of all that fighting and dying in Vietnam was not victory but stalemate, co-existence, or as it came to be known in diplomatspeak, Detente (The Hon. Henry Kissinger, Architect).

Or think back to the Carter years, when it would never do to call an evil empire evil. It would have been too accurate for comfort. Equivocation was considered the safer course. The blunt words of an old soldier destined to fade away had long ago been forgotten: "In war there is no substitute for victory." (General of the Army Douglas MacArthur, 1951.)

It was in 1977 that a defeated presidential candidate who didn't even get his party's nomination the year before met with an adviser who was going to give his foreign policy some sheen and sophistication. Over the course of a long day, Richard V. Allen reviewed the various and sundry choices that would face the next president of the United States. He did his best to educate the old B-movie actor about the subtleties of making foreign policy. The object of the exercise: to give Ronald Reagan a more, shall we say, nuanced view of the Cold War.

At the end of the lecture, Gov. Reagan said only, "My idea of American policy toward the Soviet Union is simple, and some would say simplistic. It is this: We win and they lose."

We win, they lose. That was the idea behind the policies that led to the end of the Cold War during the Reagan years, not to mention the end of the Soviet Union and the nuclear arms race that went with it.

The world before and after Ronald Reagan's presidency was quite different, for which some of us are still grateful. Since his time, however, that simple -- some would still say simplistic -- idea seems to have been lost somewhere in the files, obscured by the vague generalities of this president's foreign policy, which has so many nuances it may be more nuance than policy.

At this week's G8 Summit, there could be no doubt about what Vladimir Putin, that old KGB agent, was up to: saving Bashar al-Assad's hide and what's left of his brutal regime. No matter the human cost. Or the cost to freedom and stability in the Middle East. Why should Comrade/Czar/President Putin care about such matters? He's a power player. If only his American counterpart at the G8 summit this week would be as clear. Instead, this president drifts, and American foreign policy with him.