That's the Middle East -- and the West, too 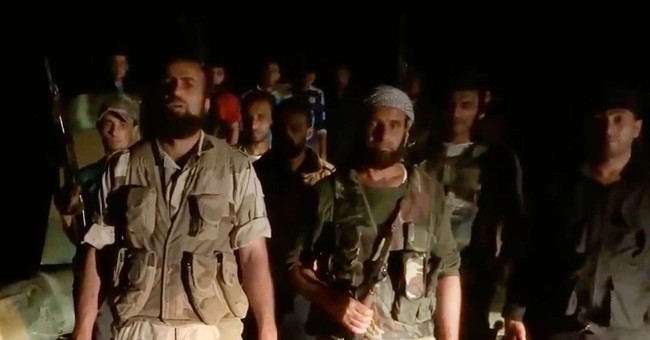 The bloody war-by-proxy continues in Syria. It pits the embattled, increasingly desperate but still determined and far from defeated dictatorship of Bashar al-Assad against a disorganized amalgam of rebels, aka the Free Syrian Army. Each has its own array of sponsors, enablers or just cheerleaders behind them. The cast of this tragedy also includes a multitude of not-so-innocent bystanders waiting to see how it will end, if it ever does.

Syria's strongman, who's no longer as strong as he once was, can count on support from Iran's fanatical regime, a world headquarters of terror with various branches. Chief among them is Hezbollah, which supplements its terrorism with an appealing social-welfare program, much as the National Socialist German Workers Party (Nazi for short) did in 1930s Germany.

In today's Middle East, Hezbollah has already taken over a large swath of Lebanon and is now in control of a belt of Syrian villages along the road that the most sophisticated weapons in Iran's armory take on their way to Hezbollah strongholds in southern Syria and Lebanon. Israel has responded, not for the first time, by interdicting that route, bombing arms caches in Syria, which include sophisticated rockets that the Israelis fear are on their way to Hezbollah's bases on its border, the better to be used against them.

A number of Arab states grow alarmed at Iran's troublemaking but seem unable to do anything about it, for the Arab world is in its usual disarray. Ditto the Europeans and Americans, who continue to aid the rebels in Syria, kind of, but have been unable to sort out freedom-fighters from terrorists.

Meanwhile, the mullahs in Iran grow closer every day to having a nuclear weapon of their own. Soon enough Israel may have to contend with the equivalent of a nuclearized North Korea in its neighborhood. The threat to its existence couldn't be clearer, Iran's leaders having vowed to wipe the Jewish state off the map.

Oh, yes, there's another factor in this bloody calculus: Syria's people also play a role in this war -- as targets, pawns and innocent victims blown apart every day. God help them because nobody else seems about to. Not in any decisive way. The West has responded to this ever more tragic crisis with a plenitude of words but precious little action. With predictable results: The last and necessarily vague estimate of the death toll in Syria surpassed 70,000 some time ago, and the number of displaced fleeing the country is put at half a million and climbing.

The chaos and desperation show no sign of abating. It looks like a replay of the slaughter in the Balkans back in the bloody 1990s, this time with a nuclear complication. Israel's air raids on Syrian arms depots may be only a forerunner of the explosive crisis that awaits should it take pre-emptive action against Iran's nuclear facilities.

The one thing in shorter supply than relief for the Syrian people may be leadership in the West, which continues to dither and dawdle in the spirit of the 1930s, taking halfway measures or maybe just quarter-way ones to end the conflict. The main thing Western capitals have done about this continuing catastrophe is fret about it.

For some time, John McCain and company in the U.S. Senate have been urging this administration to establish no-fly zones over Syria and safe havens for its fleeing people along that country's borders with Turkey, Lebanon and Jordan, all of which face a growing flood of Syrian refugees in need of food, clothing or just a place to lay their heads down in peace.

In short, what's needed from the West is leadership. But this president continues to "lead from behind." Far behind. If he has a policy toward Syria, it might be summed up as the opposite of the Roman maxim Tace et face -- Say nothing and act. Mr. Obama has lots to say but never acts.

At one point, our president warned that the use of chemical weapons in Syria would cross a red line, be a game-changer, and so threateningly on. Now that they've been used, that red line turns out to be purple, or maybe a faint lavender, or just a disappearing one in the sand, which has a way of covering everything in that part of the world.

Nor is it entirely clear which side in this war used sarin on the other. (Why not both?) All of which presents the administration with a perfect excuse to fall back on its favorite policy in such cases: Do nothing but talk a lot.

The moral of this story: Leaders who want to be taken seriously don't draw red lines. Or if they do, they should be prepared to back them up. Or, like this president, they'll look weak and confused, not tough, when their bluff is called.

As for what will happen in Syria, Edmund Burke said it: "The only thing necessary for the triumph of evil is for good men to do nothing."

If our president is looking for a model to emulate in dangerous times, he might consider how a very different president -- Dwight D. Eisenhower -- defused one of the recurrent crises with Communist China in the volatile 1950s over Quemoy and Matsu, a couple of tiny islands in the Taiwan Strait held by the Nationalists that the Communists began bombarding daily. Maybe as a prelude to invading them.

Called on to explain what the American response would be if the Communists invaded, Ike knew he'd have to address that question at a forthcoming news conference on the subject. His nervous press secretary, Jim Hagerty, worried that his boss would say something so conciliatory that the Communists on the mainland would take it as permission to seize the islands or, conversely, something so provocative we'd find ourselves in World War III.

No problem. Ike took his press secretary aside and assured him, "Don't worry, Jim, I'll go out there and confuse 'em." Which he proceeded to do, like the pro he was. He addressed the reporters in pure Eisenhowerian, a language of his own devising whose syntax was far beyond any mere grammarian's ability to untangle. It was a curious tongue designed to conceal meaning rather than transmit it. The man was inarticulate like a fox.

In the end there was no invasion, no war, and the contested islands, still peaceably part of Taiwan, are now just an historical footnote, almost forgotten over the passage of time. Instead of being remembered as a flash point like Sarajevo or Pearl Harbor.

If there's a name for Ike's diplomatic technique, it would be "strategic ambiguity." Why telegraph your intentions to the other side? Better to keep 'em guessing. There wasn't a red line in sight in Ike's extended monologue on the question. Nothing but empty verbiage, and not by accident.

Our current president is halfway there: He's got the "ambiguity" part of the formula down pat; it's just the "strategic" part that eludes him. He can ignore a pending threat with the greatest of ease (see Benghazi), but the result may not be a peaceful one (again, see Benghazi).

The comparison with Ike may not be fair, for the general/president had experience as a leader -- in war and peace. And it showed. Just as this president's inexperience does.