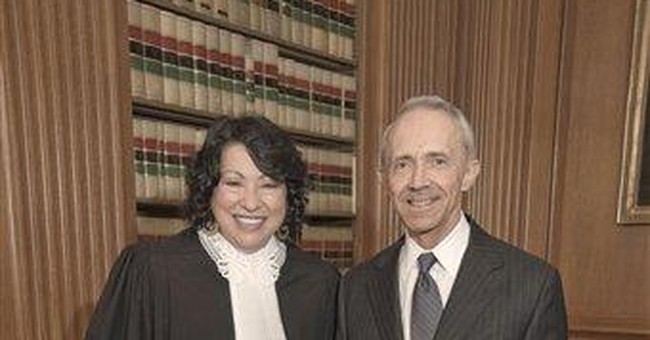 It is a time, like all times, when serious issues await debate. What may set our time apart is how unseriously those issues are debated.

Exhibit No. 1 the other day was David Souter's commencement speech at, of course, Harvard, where no theory may escape being stretched to extremes. In his address, the retired associate justice of the U.S. Supreme Court didn't exactly defend Plessy v. Ferguson, the infamous 1896 decision that would establish Jim Crow as the law of the land for the next half-century. But he came perilously close to it.

David Souter did so in order to explain/justify how judges can, do and must take the social realities of their time into account when interpreting the Constitution -- as opposed to that other, more straightforward standard, a fair reading of the law.

Each approach has its limitations, and Mr. Justice Souter certainly revealed his. In an attempt to explain the difference between the Supreme Court's frame of mind in 1896 and how it had changed by 1954, when Brown v. Board of Education was handed down, the retired justice made the case for relativism as a legal philosophy.

Plessy was a landmark decision, all right, and what an ugly landmark it remains. It may have involved only seating on a public streetcar in New Orleans, but it would provide the basis for decades of injustice. The Hon. David Souter may have set out only to explain the misguided majority's state of mind in 1896, but he wound up suggesting it as a template for how constitutional decisions are and maybe should be reached:

"As I've said elsewhere, the members of the Court in Plessy remembered the day when human slavery was the law in much of the land. To that generation, the formal equality of an identical railroad car meant progress. But the generation in power in 1954 looked at enforced separation without the revolting background of slavery. ... As a consequence, the judges of 1954 found a meaning in segregating the races by law that the majority of their predecessors in 1896 did not see ... and when the judges in 1954 read the record of enforced segregation it carried only one possible meaning: It expressed a judgment of inherent inferiority on the part of the minority race. "

Different times, different points of view, that's all. Each is defensible in terms of its own, time-limited blinkered perceptions. Mr. Justice Souter could as easily have explained/defended Roger Taney's obscene decision in Dred Scott, which held that the black man has no rights white men need respect, can never be a citizen of the United States, and is no better than chattel property.

For that was the chief justice's (and many others') view of the "social realities" of their mid-19th-century time. Even though it ran counter to the very founding principle of this republic: that all men are created equal.

So does an exaggerated respect for the "social realities" lead judges astray. It is of course not the social realities that are to blame for such injustices, but the judges' faulty perception of them, combined with the arrogant assumption that they may turn their own interpretation of social justice into law. No matter what a fair reading of the principles underlying the Constitution, let alone the Declaration of Independence, would dictate.

Dred Scott was a great victory for the spirit of its deluded time over eternal principles of right and wrong -- as a young comer from Illinois named Lincoln would soon point out.

Justice Souter's is a relativist's view of the law gone rampant. It overlooks any number of salient points, beginning with the great dissent of John Marshall Harlan the elder, in which he predicted that Plessy would prove as infamous a decision as Dred Scott, which it did.

Why? Because, to quote from Mr. Justice Harlan's indelible dissent, "in view of the constitution, in the eye of the law, there is in this country no superior, dominant, ruling class of citizens. There is no caste here. Our constitution is color-blind, and neither knows nor tolerates classes among citizens. In respect of civil rights, all citizens are equal before the law. The humblest is the peer of the most powerful. The law regards man as man, and takes no account of his surroundings or of his color when his civil rights as guaranteed by the supreme law of the land are involved."

Those words ought to be engraved somewhere in the Supreme Court's inner sancta -- if only to discourage future David Souters deciding that social justice trumps the real thing. (Whenever you hear the term Social Justice, Dear Reader, as if justice itself were not enough as the end of law, en garde! Sacred rights are about to be compromised.)

Justice Harlan's dissent in 1896 proved prophetic--not just because he foresaw the future, but, as with the Prophets of old, he proclaimed a truth that is timeless, not dependent on what today's "social reality" demands. There are some legal principles that are more than an expression of changeable ideological fashion; they are moral imperatives.

Compared to the grandeur of such a vision, it is David Souter's vapid relativism that seems simplistic. And small. His approach to the law seems quite popular with our cutting-edge liberals these days, now known as progressives. Theirs is the kind of justice that must always be modified -- by race or class or some other special interest. That is how simple justice becomes special pleading, justice becomes social justice, and the law a respecter of persons.

Even back in 1896, Justice Harlan understood the importance of maintaining a color-blind constitution, one that did not recognize race as any kind of determinant of rights. But his view is now considered dated in our age of affirmative action, racial quotas, and other forms of discrimination. Even though such proposals may be put forth in the name of not discriminating. That is the kind of newspeak the Souters of the bench deal in -- even after they have left it and are preaching at a commencement ceremony instead of in a court of law.

Of course, a wise judge will take the social context of a law into account when rendering a decision. But at the same time a justice of the Supreme Court of the United States is duty-bound to recognize that he is not free to toss aside the enduring, underlying principles of the Constitution in favor of his own idea of what social reality demands. For he has taken an oath to support the Constitution, not his own view of what the times demand.

Yes, the great justice considers the times, but not only the times. It takes justices of rare wisdom to balance the demands of their era with those of timeless principles. That is what the greatest judges do -- the John Marshalls and Robert Jacksons, the Cardozos and Brandeises, the Learned Hands and Richard Arnolds. And it is what the David Souters so notably fail to do. And how proud they seem of that failure. They present their "philosophy of law" with considerable self-satisfaction, basking in a wholly self-generated aura, and invariably quote themselves. ("As I've said elsewhere...") Brother Souter committed all those embarrassments in the course of his remarkable performance at, of course, Harvard.