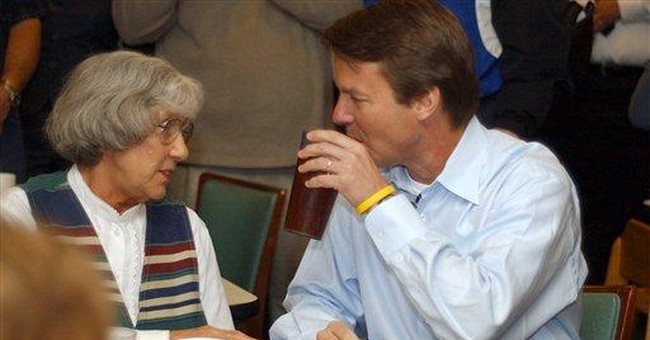 "When you come back to England from any foreign country," George Orwell wrote at the height of the Blitz in 1940, "you have immediately the sensation of breathing a different air."

He knew that feeling well. Not long before, he'd come back to England from Spain one step ahead of the comrades he'd joined to fight Franco. And who had turned on him when he held on to some flinty idea of English freedom. It was not just the relief of escape George Orwell was expressing, but the exhilaration of coming home. Not just to a country but a whole way of life and web of unspoken custom. Now that it was menaced, he appreciated it. As you do when you look back and see your family from the perspective of time -- as if you were seeing them all for the first time, and are enveloped by cascades of feeling.

Any Southerner who's been away for any length of time will know that feeling -- the wave of warmth on hearing that familiar accent, driving down those same country roads, having that sensation of breathing a different air. It is the air of your country, your childhood. ("Hey porter! Hey porter!/ Would you tell me the time?/ How much longer will it be till we cross/ that Mason Dixon Line? ... Tell that engineer I said thanks a lot,/ and I didn't mind the fare./ I'm gonna set my feet on Southern soil/ and breathe that Southern air." --Johnny Cash, "Hey Porter")

When those people, this place, this hearth and home, are suddenly threatened, we will rally to save it. Fiercely. But when the old ways are only slowly, gradually eroded, we may scarcely notice, let alone miss them. Till one day we awaken with a start and realize what has happened, as voters in Britain may have done last week:

"That England, that was wont to conquer others,/ Hath made a shameful conquest of itself." (Shakespeare's "Richard II" tends to prove ever more relevant as history proceeds from decadence to decadence.) And at that moment of realization, people vow: Enough. No more. And begin the work of Restoration .

Orwell's senses had been heightened by his country's moment of truth that would become its Finest Hour. "Yes," he wrote in "England Your England," "there is something distinctive and recognizable in English civilization. It is a culture as individual as that of Spain. It is somehow bound up with solid breakfasts and gloomy Sundays, smoky towns and winding roads, green fields and red pillar-boxes. It has a flavor of its own. Moreover it is continuous, it stretches into the future and the past, there is something in it that persists, as in a living creature. What can the England of 1940 have in common with the England of 1840? But then, what have you in common with the child of five whose photograph your mother keeps on the mantelpiece? Nothing, except that you happen to be the same person."

Much the same realization seemed to strike the British electorate in last week's general election. After long years of murky, mediocre politics, it had had enough. It looked about at what decades of slow sink into the glamorous "new" England had wrought. It saw what Tony Blair's fashionable Third Way and Gordon Brown's muddling through to nowhere, and all the rest of that Twiggy rot had really amounted to, and awoke with a spasm.

The election results were more a defeat for Labor -- its worst in maybe 80 years -- than a victory for the Conservatives and their new limited partner, the Lib Dems. At last the Tories are back, but whether they are Tories or just a mild imitation thereof remains to be seen. (Some of us will always miss Lady Thatcher.) The voters themselves may not have known what they wanted instead of this continued entropy, but they knew bloody well what they didn't want: more of the same.

To quote one observer, Gerard Baker in the Wall Street Journal: "You don't have to be a political scientist to realize that this historic election result marked something much more than the usual seductive appeal of the Time for a Change message. In fact it has been known for a while now that what is going on in the old country is not just some spasm of reaction to bad economic data, but the flowering of a deep-rooted popular disgust with the entire political class." Sound familiar?

Britain's voters seemed to realize that the bankrupt fiscal policies they were reacting against are but the superficial symptom of a deeper, moral profligacy. They were sick of Labor, the Inland Revenue, and all the rest of that bosh. It's hard to avoid the impression that what the voters in this turning point of an election really wanted was their country back. And its way of life. The way it once stood on its own "against the envy of less happier lands--/ This blessed plot, this earth, this realm, this England." --"Richard II," again.

If there is any simple way to sum up what that older England stood for, it may have been nothing more (and nothing less) than a sense of limits. The understanding, without its needing to be said, that a modest self-reliance, not just in finances but in simple unadvertised moral strength, is preferable to all the self-promotion and self-gratification in the world. And that it cannot be achieved by forever borrowing from a future continuously diminished by the present's insatiable wants.

It's as if a small but cherished realm, one far greater than its island boundaries in its influence and example, language and law and literature, had awakened one morning and vowed: Enough. No more. And realized it was time to begin the slow, hard work of Restoration.

Yes, it does sound familiar.