Turn Off the Sound 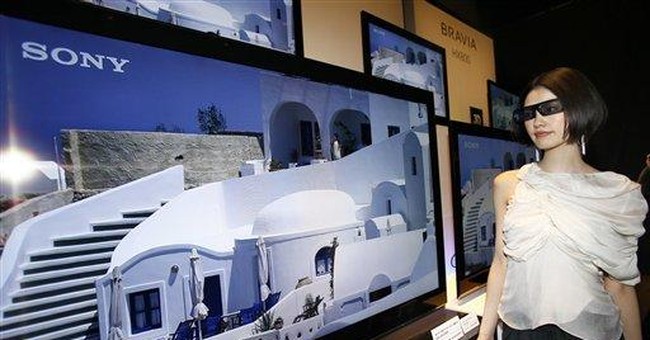 The television is on way up in a corner of the office. But with the sound off, it's scarcely noticeable. And much preferable. It's like watching a baseball game without the play-by-play. You get the game without the intruding patter. If you look at all, it's almost soothing. There's nothing to agree or disagree with, just the familiar rituals. Bats swing and connect noiselessly, the crowd roars soundlessly. Like the softly colored pictures, the silence is a steady assurance.

Yes, the world is still out there somewhere. Or as the Israelis say when they turn on the TV, it's just to see if we're still here. With a newspaperman, it's an occupational habit. So the television screen stays on even if the sound is off -- on the off chance that some of the Breaking News might actually be breaking news. It could happen.

On one side is the prototypical Frenchman. Nicolas Sarkozy is making a visit to Washington. The premier is grinning, grimacing, gesticulating. ... He is clearly not from one of the hand-mute peoples. Just as clearly, he is enjoying himself, the way a voluble college lecturer does when he purses his lips before making a particularly eloquent point, caught up in his brilliance and politesse.

Dapper, energetic, the voluble M. Sarkozy might be in a bistro explaining why one pinot noir has it all over another, or why one of the who-knows-how-many varieties of brie is superior to the others. His hands slice the air, his economical Gallic shrug says it all. C'est la vie, non? He can say more with a wry look than anyone not French could say in a whole book. Naturally the greatest of mimes, Marcel Marceau, would be French. They have a talent for the nonverbal.

On the other side of the screen -- handsome, intelligent, restrained, smooth -- is the American president. Barack Obama seems almost immobile by comparison, even when he opens his mouth to say something agreeable and no doubt elevating. He's taller, quieter, younger but just as commanding, if not more so. Calm, cool, confident. He exudes tact yet power.

The actors recite their lines, mutual admiration is expressed, and the play is concluded without a hitch. Well done. You feel like applauding at the end, so flawlessly do they exchange their respectful, soundless volleys.

It's a nice picture. Then I make the mistake of turning on the sound. The two speak but they're not really saying anything. They're talking about invoking sanctions against Iran's nuclear program, but it's been clear for some time that such talk is empty. And Iran's mullahs know it. For they proceed to develop their Bomb, heedless of all the world's verbiage.

It's an open secret by now. It's all been a charade, the endless talk about never allowing Iran to get its finger on the nuclear trigger. The more the two men on the little screen talk, the emptier their words grow. In the style of Dr. Strangelove, the West has learned to stop worrying and start loving the (Iranian) Bomb. These are the years the locust has eaten, and soon there will be no way of recovering them.

Already public opinion is being readied to accept what we'll be told is the inevitable. It's really the best of all possible worlds, you see, all things considered. The word being used to describe the emerging and indeed already de facto policy is containment, appeasement having acquired a bad odor in the Thirties. It requires no action on our part, just words. It's less strategy than drift.

The two leaders, so different in style, seem essentially the same. They exchange platitudes about preventing Iran from becoming a nuclear power even as it becomes one. Month after month, the centrifuges whirl and the rockets are tested. But the voices emanating from the tube still repeat the same, unconvincing lines.

I look to the right side of the screen, then to the left, and it is hard to tell any difference between their positions. America turns out to be not so exceptional after all -- just another former great power managing its decline in the most sophisticated way. We could be at the Quai d'Orsay circa 1938. Plus ça change, plus c'est le même chose. The more things change....

Different as they are in outward manner, both politicians seem much the same familiar type: social democrats in the accepted European mode. Fashionable, articulate portraits in inertia. Figureheads who leave the real governing to the civil servants, the professionals, the bureaucrats. For the experts know what is best for the rest of us. They'll explain it to us once we've been properly prepped. We are to be good patients, uninquisitive, passive, accepting whatever is done to us. Mustn't make a fuss. Doctor knows best.

Or as Nancy Pelosi said about the health-care bill, "we have to pass the bill so that you can find out what is in it, away from the fog of the controversy...." One day, when the Iranians test their nuke, we'll be told that this, too, has been all for the good. The best of all things in the best of all possible worlds.

I've heard enough. I turn off the sound. Ah, that's so much better. The scene is so much more impressive without words. Or as Chesterton said about Times Square when he first glimpsed its glittering lights: "What a glorious garden of wonder this would be, to anyone who was lucky enough to be unable to read."