A Senator Sees the Light 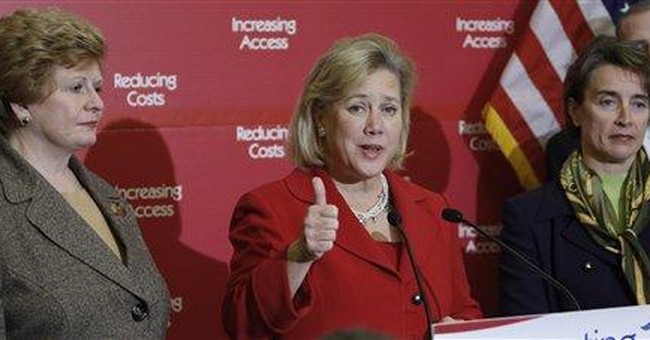 LITTLE ROCK -- Have you noticed? The closer Election Day comes, the more conservative some blue-dog senators sound. Till they turn almost Republican red. Consider the case of Blanche Lincoln here in Arkansas. By the time the primary is held in May, this state's senior senator could be speaking at Tea Party rallies. A headline on the front page of the Arkansas Democrat-Gazette said it all: "Pressure on the rise for Arkansas' Lincoln/ Amid criticism, she chides party, Obama." To quote the story's lede:

"U.S. Sen. Blanche Lincoln distanced herself from Democrats over and over last week. On Tuesday, the Arkansan told the Senate Finance Committee that she doesn't understand the Obama administration's economic vision. With cameras rolling, she blasted the White House's proposed budget and told Treasury Secretary Tim Geithner about life in what she called 'the real world.' Then, while Geithner was still testifying, she darted to a news conference to tout get-tougher-on-terrorism legislation with 2008 Republican presidential nominee (and Arizona senior senator) John McCain...."

Then there was Sen. Lincoln's little confrontation with the president himself at his pow-wow with congressional Democrats. He essentially brushed off her concerns about the party's extremists. Indeed, he brushed her off. After all, Barack Obama isn't the one who's up for re-election this year in a basically conservative state. Who says he's not willing to sacrifice (a Democratic senator) for his principles?

It's long been standard operating procedure for Democratic incumbents in Arkansas to morph into flag-waving conservatives as campaign season arrives. This year Miss Blanche is doing it at warp speed. She's just following the poll numbers. Not just Arkansas but the whole country -- even Massachusetts! -- has begun to react against the Obama-mania that was sweeping the nation just about this time last year. Enthusiasms change. Sometimes diametrically.

The same senior senator from Arkansas who supported that 2,000-page monstrosity of a health-care bill now has turned into a spirited critic of the party leaders whose bidding she once did.

It happens every six years. Blanche Lincoln already has begun to appear in cameos on Fox News. Look for her as the featured speaker at a Lincoln Day banquet near you any time now. It's going to be awfully interesting -- more awful than interesting -- to hear the senator explain how her vote to have government micro-manage your health care was actually a conservative stance.

At last report, Sen. Lincoln was headed for the political middle so fast she'll soon find herself a right-winger, or at least sounding like one. Much like many another species that has mastered the art of survival, she's learned the art of protective coloration.

Here's what she told Secretary Geithner when he appeared before the Senate Finance Committee last week in his usual role as punching bag: "I think most Arkansans don't understand the vision of the administration when it comes to putting in place an economic policy that works for our nation in today's economy and the economic climate today, to create the jobs that Arkansans need now in our economy." The words may be Blanche Lincoln's, but the tune is the Republicans' this election year.

Senator Lincoln has even started to talk about the need to push back against her party's left-leaning establishment, "and look for the common ground that's going to get us the success we need...." What a difference an election year can make in a politician's attitude.

Those who chase the bubble Popularity, rather than steer by the fixed star called Principle, have to do a lot of tacking to keep up with every shift in the political winds. They come to resemble cars in this respect: There's a new model out every year. This year's (Blanche) Lincoln comes with conservative lines.

After the election is over, and if she's still senior senator from Arkansas, there'll be plenty of time for her to return to her role as another Democratic backbencher who goes along to get along. In the meantime, Arkansas voters are catching on to her hexennial routine, and starting to wonder not just if the real Blanche Lincoln will stand up, but if there is one.