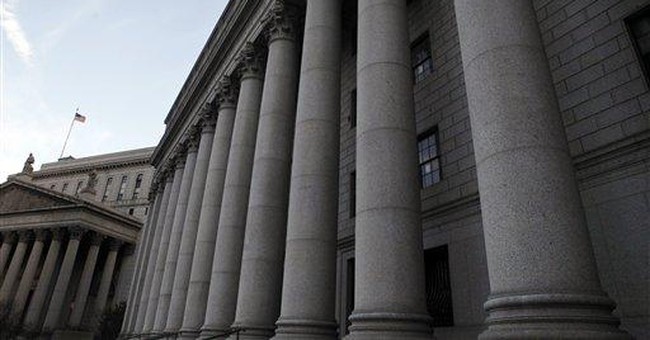 Worried about trying the ringleader of the 9/11 terrorists and four of his close associates in a civilian courtroom?

Don't be, says our president. He knows just how the trial will turn out -- Khalid Sheik Mohammed will be convicted and executed. We have his word on it.

He makes the trial sound like just a formality. And here some of us thought trials didn't have a predetermined outcome, not in America. Naive us.

Despite all the assurances from on high, almost every aspect of this coming trial-cum-circus troubles. From its hazy conception to, according to the president and his equally cocksure attorney general, foregone conclusion.

The prospect of moving this trial from safe and secure Guantanamo to bustling downtown Manhattan worries because, well, it's worrisome.

What possibly could go wrong? What couldn't? Some of us more cautious types worry that legal technicalities and complications will result in an endless trial without sure result, that the trial will require needless expense (the figure of $75 million just to assure New Yorkers' safety has been bruited about), that it will expose judges, jurors and witnesses to all too real threats (just as an earlier trial of jihadi bombers in New York did), that secrets about the sources and techniques of American intelligence may be revealed even inadvertently, and that the defendants will turn a federal courtroom into another forum for their pet hates. The country may be in for a repeat of the farcical proceedings in U.S. v. Zacarias Moussaoui, the stranger-than-usual terrorist now living out the rest of his days as the guest of the U.S. taxpayers at a maximum-security prison high in the scenic Rockies.

Pick your favorite downside of this change of venue. There are lots to choose from. And others will become evident only as this show trial gets on the road. It promises to have a longer run than any Broadway hit.

Don't forget the effect of such a spectacle on the immediate victims of the September 11 attacks -- the kith and kin of all those thousands murdered. "We are heartsick and weary of the delays and machinations," says Alice Hoagland, whose son died aboard United Flight 93 when its heroic passengers staged the first American counterattack in this war on terror. A war this administration would like to call something else. It prefers the euphemism "overseas contingency operations," as if not calling a war a war would end it.

Lewis Carroll would understand such logic; the rest of us might have more difficulty substituting phraseology for reality.

Alice Hoagland isn't the only one heartsick over this latest instance of justice delayed and therefore denied. The whole nation was attacked that terrible day, justice seems no nearer, and this latest complication might only put it off yet again.

To what end? So the president and his attorney general can prove an ideological point -- that the criminal code is superior to military justice in these high-profile cases?

When this administration disparages or even tries to delegitimize military courts, it overlooks the fact that military commissions antedate federal courts in our history. Among the first such commissions was one appointed by a general of the Continental Army named George Washington.

Few things so reveal the ahistorical approach of this born-yesterday administration than its bypassing military law -- except, of course, when military commissions suit its purposes. In this case, Messrs. Obama and Holder, Esqs., have chosen to gamble on the federal courts despite all the clear and increasingly present dangers such a decision will raise.

What, Barack Obama worry? All such concerns about Khalid Sheik Mohammed's being tried in a civilian courtroom will disappear, says the president, "when he's convicted and when the death penalty is applied to him."

Not that he's prejudging the case, our lawyer-president was quick to add, having just prejudged the case.

If this trial were being conducted where it should be -- in a secure military courtroom at Guantanamo -- such statements from the commander-in-chief would be clear evidence of what in military law is called command influence. And be grounds for a mistrial.

That's another way in which military justice is superior to the civilian kind being arranged for Khalid Sheik Mohammed and company. Military law contains safeguards against undue influence.

Yet the president insists on a civilian trial in order to demonstrate the fairness and superiority of civilian courts in such cases -- even as he proclaims the trial's outcome.

First it was Obamacare. Now the country is about to get Obamalaw, which promises to be a treasure trove of such ironies.