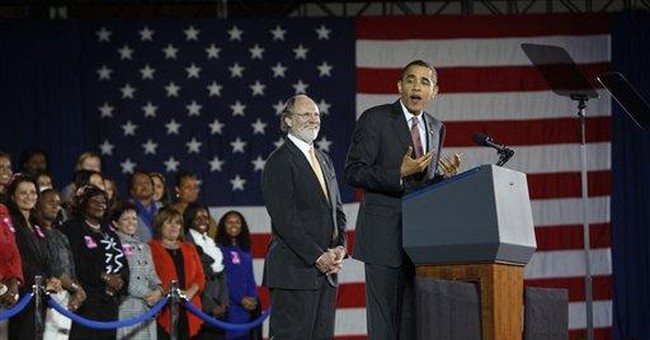 No doubt about it, Barack Obama is the president of the future. The worrisome part is that he may always be. If there is a presidential decision that can be put off, a bold new policy that can be negotiated into just a continuation of the old, a way to change momentum into inertia ... this president's your man.

There's not a pressing problem he can't be trusted to discuss, and discuss, and discuss for so long that it remains a problem but only more complicated. Slowly but never surely, halfway measures become quarter-way measures become ... the same old policies. But now they're covered by still more layers of bureaucracy, expense and government debt. Without improving or even basically changing anything.

At this point, our ever new president's accomplishments are much like his Nobel Prize -- a laurel for promise rather than performance.

A bold new direction in health care has become a change in health-care insurance, which is fast becoming not so much a change as just an expansion of the old, ramshackle system. A system all can agree is broken will remain broken but in a more complex, more up-to-date way that will require more elaborate forms.

But that's all right; the forms will all be electronic. Isn't that the important thing? For as we know, computers never go down and Washington can fix all our problems. Don't fret, it'll all work out in theory. If only in theory. This much is sure, however: It'll cost a lot.

Even if something emerges from all the talk and votes and negotiation and renegotiation and polspeak and general dithering over health care or just its insurance, any real changes, if there are any, wouldn't go into effect till 2013 -- after the president is safely re-elected on a platform, no doubt, of change, hope and audacity. None of which ever seem to materialize.

It's all a lot like his economic stimulus, which somehow never seems to dent the unemployment rate. On the contrary, joblessness continues to grow in tandem with the deficit.

But who cares? This president is articulate even if he doesn't actually say anything, a great leader even if he isn't actually leading. It's the talk that counts, don't you see? The conferences and confabs and the glib explanations, those are what matter. Those are what the daily headlines are about. And the mantra running through them is always: To save more, spend more! And if you can't appreciate that, what are you, some kinda racist?

Meanwhile, a decision still looms in Afghanistan. As it has loomed for years. And may loom for years more while the war and the casualties go on. A necessary war somehow has become an optional one, and just in time for the midterm elections at that.

At this point, the president of the future sounds much like one from the past, specifically George W. Bush enmeshed in Iraq before he summed up the courage to change everything -- strategies, generals, secretaries of defense, whatever it took.

Barack H. Obama has not yet shaken off the fog of war, and so he stumbles on into the slough of despond that awaits any commander-in-chief who doesn't command. At a cost that tears at the heart. Or would if anybody dared look beyond the president's always smooth words at the actual results of his policy, or rather non-results of his non-policy.

Speaking of halfway measures becoming permanent stalls, Bill Clinton's humiliating compromise ("Don't ask, don't tell") continues in kind of force. This president, too, is going to treat homosexuals as full citizens who can serve their country openly -- someday. "I will end Don't Ask, Don't Tell," Barack Obama promised just the other evening -- to cheers and applause. He just didn't say when.

What's the matter, can't he find a pen to sign an executive order? The way Harry Truman ended Jim Crow in the armed forces at a single stroke. All it takes is a decision -- but that's just what this president isn't about to risk. Else, what would there be left to promise next election?

When this president of the (always receding) future does announce a bold decision, what if anything happens? What ever happened to that slew of executive orders closing down the military prison at Guantanamo by the end of the year? Did reality intervene? Will we get an explanation instead of a result once again? Or will this president even bother to explain himself?

One thing's for sure: He's not likely to just come out and admit it was a dumb decision and reverse it. Whatever the explanation he comes up with, you can bet it'll be complex. Complexity, that's the thing. It's the perfect thicket in which to take refuge when hope, change and audacity become only words.

Why, for example, propose a simple and simply enforced tax on carbon-producing industries, or even on carbon-producing products like (perish the thought!) gasoline, when you can devise a cockamamie cap-and-trade system that would do credit to Rube Goldberg if no one else? A system that, like any changes in health-care insurance, wouldn't go into effect until safely after the next presidential election.

Anything so simple as a straight-out tax on fuels that would dirty the atmosphere would seem beyond this consensus-building, community-organizing, meeting-holding president. It's been observed since at least Adam Smith's time that, if you want to make something scarce, just tax it. Windows, income, capital, you name it. So why not tax pollution? Because, of course, that would require the scarcest political commodity of all: courage.

The surest way to tell the next great achievement of this president that won't actually be achieved is to note which ones he's spoken most forcefully about. Afghanistan is a war that must be won! Iran's crazies will never be allowed to have nuclear weapons! This president will be the last who will have to reform health care! The planet will be saved from global warming! And so the country drifts on in war and peace till it grows harder and harder to tell which is which. And this president of the future remains just that.