Half-Speed Ahead and Unsteady as She Goes 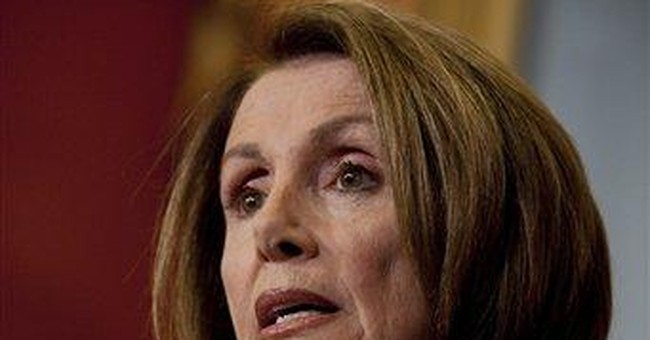 What do you think it's like just now to be a GI somewhere at the end of the earth, say in mountainous Nuristan in eastern Afghanistan, and see the latest video of Nancy Pelosi and Harry Reid addressing the press outside the White House, just having left still another strategy session on this endless war?

Is it like being a grunt in Vietnam back in the chaotic Sixties and reading about the Best and Brightest urging another escalation?

Or is it more like being a member of the Chosin Frozen advancing in a different direction, that is, retreating down the Korean Peninsula in what we now call the Forgotten War?

Maybe it's like being a trooper a couple of years ago in Iraq. Remember when everything was falling apart there every day? And all the braid-covered generals were advising a hapless president to keep doing the same futile thing in hopes of achieving a different result?

Over the weekend, still another outpost was attacked in the distant reaches of Afghanistan, and still more American soldiers -- and Afghan ones -- were lost. An undermanned and overstretched international force struggles on in that graveyard of empires. And waits for word from Washington. And waits and waits.

Barack Obama had sounded so determined to win that war -- his war, the one he called the right war -- when he took the oath of office as president (and commander-in-chief) early this year. How long ago that now seems.

You don't hear that kind of talk from the Oval Office these days. Its occupant has fallen silent on the subject of Afghanistan. Even while everyone around him talks, talks, talks. His press secretary says the country has no option but to stay in Afghanistan. The isolationists, whom we will always have with us, say the only realistic option is to leave.

The word is that the president is now undecided about how decided to be about this war. But the Taliban are decided. That much is clear with every casualty report.

"It is important that we take our time to do all we can to get this right," says Robert Gates, our own Talleyrand, for he stays secretary of defense while presidents change. "In this process," he tells the press, "it is imperative that all of us talking part in these deliberations -- civilians and military alike -- provide our best advice to the president candidly but privately."

Privately? But it's no secret where this secretary of defense has come down in this ongoing debate/discussion/general milling about. He's somewhere in the hazy middle between the equal but opposite counsels being offered the president. Wars may come and go -- Iraq, Afghanistan -- but he stays secretary of defense by hewing to the middle of the road. Wherever it leads.

On one side of this not very private discussion at the highest levels is the commander in the field -- Gen. Stanley McChrystal, who needs more troops if he's to accomplish his mission. On the other are those who would change the mission. Although just how isn't clear. Maybe they'd pull the troops back into isolated compounds (always a sign that the war is being lost in the countryside) and settle for firing an occasional missile or drone at the enemy. It would be easier to fight the war that way. And easier to lose it. To win, somebody's got to plant muddy boots on the ground. But for the moment the command from the top is: Unsteady as she goes!

All wait to see what course the president will choose, or will let others choose for him. In the meantime he dithers -- and Americans fight and die. Right now he seems less a commander-in-chief than a mediator. Or maybe just a community organizer. Of a bickering community. That's another bad sign. For divided we fall.

Barack Obama is not the first American president faced with such a decision, and surely won't be the last, for war is a constant of human affairs. Harry Truman had to decide what to do in Korea, and chose not to decide. Result: A bloody stalemate month after month, year after draining year.

Then a new president, a military man, took office and dropped a not so subtle hint that he was ready to use nuclear weapons to end the conflict. A truce followed within the year. Maybe it helped that Ike had chosen as his secretary of state a cool, clear-eyed and unwavering anti-Communist of long standing and considerable diplomatic experience: John Foster Dulles, the John Bolton of his time. A mirror image of Communist China's longtime foreign minister, Chou Enlai, who finally met his match in Mr. Dulles. If there had been an Onion at the time, its headline might have read: Communist Meets Calvinist.

Whatever the reason, the war stopped. There is still no formal peace in Korea, and American troops still stand guard on the DMZ, but Eisenhower's truce has lasted half a century. Not bad for a president his critics depicted as just an old duffer.

John F. Kennedy, whose Harvard brain trust advised him to start sending whole divisions to Vietnam, sent only more military advisers instead. It was left to his successor, Lyndon Johnson, to escalate the war. LBJ's secretary of defense, Robert McNamara, was supposed to have been brilliant and the whiz kids around him infallible. Naturally, they failed.

George W. Bush spent a year following the same old advice from the same old generals in Iraq. And the country reaped the same old, futile results. Then one day the president and commander-in-chief woke up, fired his secretary of defense, and found his Grant in the person of a general named David Petraeus.

Urged on by the likes of John McCain and Joe Lieberman in the Senate, a deeply unpopular president defied conventional "wisdom" and ordered even more troops to Iraq. The new strategy was called the Surge, and it worked.

Now the nation waits to see what Barack Obama will do in Afghanistan. And waits and waits. Time is running out, and precious lives are being lost. Here's hoping this president will make the right decision -- or just a decision. Rather than split the difference between all the divergent advice he's been getting and wind up adrift, then overwhelmed. Much like Jimmy Carter. Heaven spare us.

There is one clear, unending source of counsel this president needs to pay close attention to. He needs to meet with his vice president and take careful notes. Yes, that would be Joe Biden, who advised splitting Iraq into three parts when all looked lost there. Which would have been a recipe not just for military but humanitarian disaster. The same Joe Biden, along with other leading senators named Obama and Clinton, opposed the Surge in Iraq. All of which makes Mr. Biden's opinion about Afghanistan invaluable. The president needs to be sure and get it -- and then do the exact opposite. Surely that would be the safest course. For the vice president has a proven record in these momentous matters.