The Triumph of Consensus 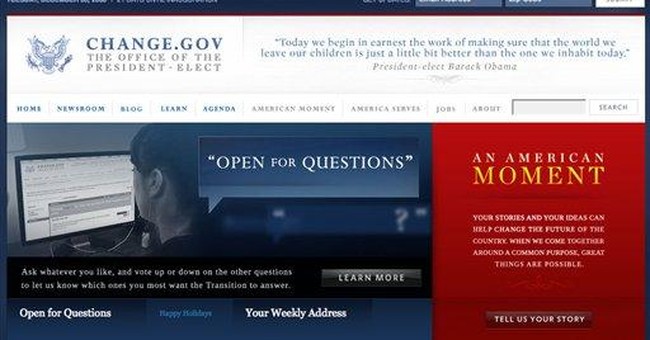 Anyone looking for an example of the genius of American politics, and how Barack Obama exemplifies it, need go no further than the just-announced program for Inauguration Day:

Aretha Franklin, the queen of soul herself, will sing; the Rev. Rick Warren will deliver a surely purpose-driven prayer; Yo-Yo Ma will play the cello and Itzhak Perlman the violin; a certified professor of African American Studies will contribute the inaugural poem ... and so eclectically on.

If any creed, color or assorted national origin has been overlooked, it'll surely be included in some future Inauguration Day as this never finished nation continues to jell, spill over, rock and roll, and even harmonize. Walt Whitman could still hear America singing.

With the tragic exception of the late unpleasantness of 1861-65, the American model of mutual tolerance has worked beautifully. "We are all Federalists, we are all Republicans," said Thomas Jefferson at his first inaugural, displaying a smooth American style Barack Obama continues to perfect. Come January 20, we'll all be Democrats, we'll all be Republicans.

"The Genius of American Politics" is the title, theme and subject of Daniel Boorstin's classic little book and primer. It remains relevant because the classic, unlike the contemporary, does not date in politics any more than in the arts. In his indispensable guide to the American way, Mr. Boorstin -- he prided himself on not being a Ph.D. -- argued that American political history has been a triumph of pragmatism over ideology, legalities over theories, and of consensus above all.

For that reason, Americans have practiced politics with remarkable continuity, at least compared to Europe's upheavals, without producing any great, universal work of political theory. It is no accident that the best study of democracy in America should have been done by a Frenchman. Americans tend to practice political theory only unconsciously.

And we've practiced religions in profusion without producing any great work of theology. Religion, as Daniel Boorstin noted, has been a pervasive and inseparable presence in American politics from the founding, but not any one religion.

To quote an offhand but telling comment from Dwight Eisenhower, a president who was naive only on the surface: "I am the most intensely religious man I know. ... That doesn't mean I adhere to any sect. A democracy cannot exist without a religious base. I believe in democracy." The word for American religion at its most politically useful, and maybe in general, is instrumental. ("The family that prays together stays together.")

Religion is a political means in America, even if personally it is an end. No one can doubt that our greatest presidents were deeply religious, but who knows or cares what particular denomination a Washington or Lincoln belonged to, if any? It's a good sign that Barack Obama is said to be reading a lot of Lincoln lately. It shows.

Every president of the United States becomes a kind of archbishop of a vague civil religion, a mild distillate that has been described as the lowest common denominator of all socially acceptable creeds at the time. There was a time when it was synonymous with Protestantism. At another point, it grew to include the Big Three (Protestant, Catholic, Jew) and is being expanded even now as the Muslim population grows.

Whether each of those faiths has influenced America more than America has influenced them is a question for sociologists to explore. The rest of us can just be grateful for the peace and harmony that has resulted from the peculiarly American devotion to both the free exercise of religion and the prohibition against anything regarding an establishment of religion in this country.

All of which makes Barack Obama's inviting the Rev. Rick Warren to give the inaugural prayer January 20th another stroke of his and America's political genius. Naturally the choice has deeply offended the kneejerk ideologues in his following. Which is another reason to praise it. For it demonstrates the president-elect's personal, political and religious tolerance.

The Rev. Warren, the Dale Carnegie of today's American religion, is a staunch fundamentalist and advocate of pro-life policies. In that regard, he asked some tough questions of the Democratic candidate in an interview during the campaign, to which Barack Obama could make only the weakest of responses. But as president-elect, Sen. Obama holds no grudges; he has a country to unite.

Nor does this president-elect let religious loyalties get in the way of his general career advancement. Remember how, in a particularly eloquent address on the subject of race in America, Barack Obama expressed his abiding identity with his South Chicago church and his old mentor there? But as soon as they became unmistakable political liabilities, he jettisoned both. The crucial test for his religious affiliations was that they remain useful.

In that sense, our next president is admirably Roman. To quote Gibbon's "Decline and Fall": "The various modes of worship which prevailed in the Roman world were all considered by the people as equally true; by the philosopher as equally false; and by the magistrate as equally useful. And thus toleration produced not only mutual indulgence, but even religious concord." What else is there to add? Except perhaps the generic ending of every presidential address: God Bless America.