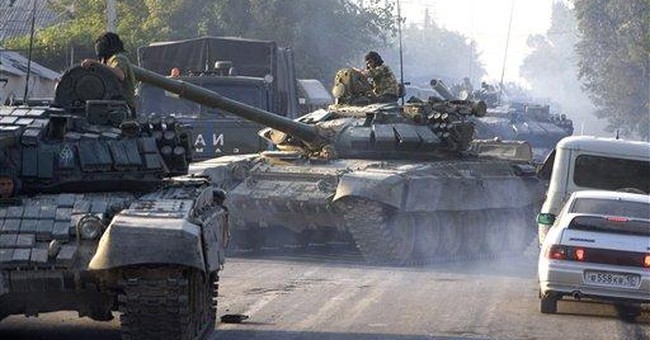 "War has started." That was the word from Vladimir Putin, currently prime minister and informally the latest Tsar of the new-old Russia, who at the time was speaking directly from the Genocide Olympics at Beijing, that grand festival of world peace and brotherhood. The ironies abound.

Ah, yes, just what the world needs: another war. And where has this one started? In the Caucasus between ever imperial Russia and a much smaller but ever feisty Georgia, which broke away from the old Soviet Union when it disunited.

The war is over South Ossetia, a province that in turn broke away from Georgia - and has been struggling for independence or some form thereof ever since. (North Ossetia remained part of Russia, South Ossetia did so only informally.) To many of us, Ossetia is a name about as familiar as Bosnia was in 1914 - before an Austrian grand duke was assassinated while touring its capital, Sarajevo. And tension began to mount.

At first that, too, was going to be just a localized conflict, one between the Austro-Hungarian Empire and Serbia. The trouble was going to be ironed out by Europe's great powers in their collective wisdom. Each in turn moved to arbitrate, negotiate, fulminate and generally temporize before, alas, they mobilized. Result: an almost accidental world war, the first of two that made the last century man's bloodiest.

The moral of the awful story: Temporizing can be dangerous to the world's health. Fail to resolve a crisis soon, and the world could wind up fighting at length.

Now it's the world's powers - NATO, Washington, the European Union - that are moving to arbitrate, negotiate, take sides and generally dawdle while the bombs burst. Meanwhile, casualties mount, refugees flee, bodies litter the streets, and the communiques give conflicting versions of who was to blame.

Georgia begins to realize it has overplayed its hand by moving to regain its restive province. The Russians see their chance, if not to seize Georgia, then to overthrow its government. The Russians go marching through Georgia; the Georgians appeal to Washington for help. All concerned grow more belligerent. This Is Not Good.

Something needs to be done. Right Now. Like ensuring a cease-fire and getting the warring powers and representatives of those caught in the middle to start talking instead of fighting. Then a settlement might be worked out, as eventually it was in the Balkans when the Serbs, Bosnians, Kosovars, NATO and the Americans found themselves at war.

Someday the Ossetians could enjoy a kind of independence akin to that eventually won by Kosovo. But that is way down the theoretical road at this point. Let's hope it's not also a bloody road.

Lest we forget, the First World War, that calamitous folly, would prove only Act I of a century of world war, revolutions and bloody upheaval of all kinds. It began in a month-long combination of farce and tragedy: The Austrians demanded satisfaction of the Serbs for the assassination of their royal scion at Sarajevo. The Serbians turned to their Slavic big brother, Russia, for protection. The Austrians in turn appealed to their German ally, which gave them a blank check to do as they wished. The French, honoring their alliance with the Russians, not to mention their long-standing animus toward all things Teutonic, lined up against Germany. While the German general staff, acting on a long prepared plan for war against France (the Schlieffen Plan) struck through undefended Belgium, which meant the British, committed to Belgian neutrality, felt obliged to enter the war on the French side.

The golden summer of 1914 ended early, and with it, a golden era. And the lights went out all over Europe.

Mainly because nobody in power was able to say, STOP! - and make it stick. The world has been paying for it ever since.

This time, could we please skip the war and go directly to the peace? Little wars have a way of spreading into great ones. Especially if, like a wildfire, they're ignored.

Remember how long it took to get serious about stopping the carnage in Bosnia back in the always temporizing Age of Clinton? Now another war has begun. Should we ignore it at length, too? After all, who in this country ever heard of South Ossetia? About as many people who could have told you where Bosnia was in 1914.

If only there were a real United Nations, but of course there isn't. Which leaves it to this era's great powers, including the greatest one, to rush in the diplomats - instead of having to rush in troops. Let us take thought. And action. Time is lives. And safety. Don't squander it.