Notes on a Debate 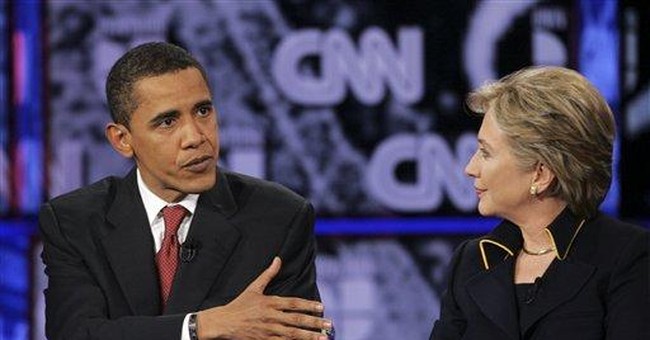 Barack Obama, the young challenger, looked a little hesitant coming out of his corner for Thursday night's big bout in Austin. He seemed slow and halting in his initial remarks compared to Hillary Clinton, the veteran debater. From the first, she came across as the smooth, powerful professional she is. It took a while to figure out why her usually verbally elegant opponent seemed to be short of charisma this evening. Then it dawned: In a one-on-one debate, Sen. Obama is without the cult following that fills vast auditoriums when he alone occupies the spotlight.

There really wasn't much difference between the two rivals when it came to economic policy. The choice they offered voters was between tax-and-spend and tax-and-spend-more, though it wasn't clear which candidate espoused which position. Each seemed to vie for the title of champion taxer and spender.

Given such a choice, it was easy to see why voters in the last 10 Democratic primaries - a grand total of 11 if you count the primary arranged for Democrats abroad - would choose Barack Obama. If there's not much real difference between these two, why not go with the candidate who makes tax-and-spend sound like a bright, shiny, new idea instead of the same old racket?

Both these senators wound up defending earmarks, which is how members of Congress get appropriations for their pet projects into law without risking an open vote on them. Come fall, one of these candidates will doubtless have to debate John McCain, the great opponent of congressional earmarks and deficit financing in general. Whoever the Democratic nominee turns out to be, he or she will sound equally unconvincing. Pork is pork.

Here's how she would rev up the economy: Freeze interest rates for five years. Declare a moratorium on housing foreclosures. Call a "time-out" on free trade agreements Smoot-Hawley style.

(Historical footnote: The Smoot-Hawley bill, which dramatically increased tariffs, was the Hoover administration's answer to the Great Depression; naturally it succeeded only in prolonging it because it had the effect of freezing American trade. Just as Miss Hillary's timeout would.)

In general, Hillary Clinton's temporizing would only put off solutions, worsening the problems and delaying the eventual recovery.

To sum up, it's a hard question which of Sen. Clinton's economic panaceas makes the least sense. She's got her practiced sound bites down pat, all right. What she lacks is Economics 101.

On immigration and its discontents, Hillary Clinton sounded as sensible and humane as Mike Huckabee. (That's the Mike Huckabee who as governor of Arkansas stood fast against against the hysteria over ILLEGAL ALIENS! - not the presidential candidate who's begun pandering to the kind of voters who'd rather go on fighting this problem than fix it.)

Sen. Clinton wants a comprehensive approach to immigration - one that puts illegals who have a clean record on the long road to citizenship, brings them and their families out of the shadows, and makes them pay a penalty for breaking the law. She doesn't envision deporting all 12 million of them or so, thank goodness, with all that would mean in terms of disrupting their and their children's lives, not to mention the American economy in general.

Sen. Clinton also knows the difference between a national and an official language. She would insist that English remain the national language, the glue that holds the nation together, and embodies and reflects so many of our national values - political, legal and cultural. That's why she would insist that immigrants and future citizens know English. But she wouldn't start a wholly unnecessary language war a la Quebec by declaring English the one and only official language and discriminating against all others. That way lies little but friction and ill will.

On this subject, Sen. Clinton sounded almost as sensible as John McCain, principal promoter of the bill that tried to solve this problem last year - a bill much too sensible to get past the House.

For his part, Mr. Obama suggested we tone down the rhetoric that has inflamed this issue. Good suggestion.

As for building a fence along the country's southern border, an overdue gesture of respect for the law even if it may prove little more, Sen. Clinton seemed to be in favor of building it without actually building it, at least not in places where it might inconvenience anybody.

As with many another tough question, Mrs. Clinton favors an indefinite review of all the options. With any luck, she might be able to temporize on this issue clear to the end of the presidential campaign and, if successful, throughout her administration.

How Clintonesque. The last Clinton administration was also good at marking time, adverse as it was to taking any position clear enough to offend anybody. Thursday night, Sen. Clinton kept emphasizing her extensive experience. Unfortunately, it includes a lot of experience at evading hard choices.

Sens. Clinton and Obama tried to outdo each other in ignoring the good news from Iraq on both the military and political fronts. Determined to snatch defeat from the jaws of victory, they would withdraw American forces from that country and battlefield just as the Surge is producing the results its backers - like John McCain - had hoped for.

In contrast, the Democratic candidates' idea of supporting the troops is to deny them the victory they've sacrificed so much for in Iraq. The Clintons and Obamas in American politics have set their mouths for an American defeat and are determined to get it.

The thought of either of these candidates as the next commander-in-chief of this country's armed forces should cheer and embolden America's enemies, and not just in Iraq.

The clearest and maybe only real difference between these debaters Thursday night was over health care. Hillary Clinton was distinctly the more knowledgeable of the two on the subject. More impressive, she was willing to take a political risk by insisting on universal health care - and require everyone to sign up for insurance on pain of law. On health care, she doesn't bob and weave. She'll actually risk taking an unpopular stand because she's convinced it's the right one. One this one issue, she's not at all Clintonesque. Her courage impresses.

It was Barack Obama who sounded Clintonesque this time. He seemed to be for universal health care without its being universal, since he wouldn't make everyone take part in his program. Even though, in order for universal coverage to work, everyone must do his share. (See Romneycare in Massachusetts, which has been getting some good reviews.) Do you think Sen. Obama would make enrolling in Social Security voluntary, too? Imagine how well that would work.

Who won the debate? It scarcely matters, since neither candidate made the kind of gaffe that would have derailed his - or her - campaign. I'd give it to Miss Hillary on points, but not by enough to assure her victory in either Texas or Ohio come Tuesday, March 4th. Those are must-wins for her if she's going to stop the Obama bandwagon, or at least make it pause.

Some of us would love to see Hillary Clinton make this a horse race again. Not because we're for her; she's a hard candidate to love, lacking her opponent's cool grace on the hustings. But a close race tests presidential candidates in a way no easy victory could. And the next president of the United States will need all the testing he - or she - can get.

Conclusion: The combined effect of both these Democratic candidates is to make John McCain look even better. If the prospect of either Hillary Clinton or Barack Obama in the Oval Office doesn't solidify Sen. McCain's conservative base, nothing will.