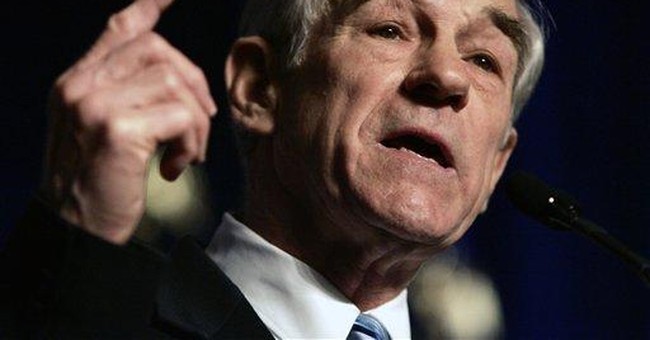 American history is so remarkably continuous, like American institutions, that sometimes it’s scarcely necessary to consult the history books to find out what some past political cause was like. We need only observe a current one.

Consider Ron Paul. The man is this year’s perfect historical artifact. He’s running for president in 2008, but he could have stepped right out of 1888, or 1898, when populism was all the rage, literally. It was Mary Ellen Lease, one of the great populist fire-eaters of the time, who urged restive Kansas farmers to raise less corn and more hell.

The populist impulse remains strong in American politics. So long as there are uncertain times and people looking for simple answers to questions that are anything but simple, there will be Ron Pauls to channel our dissatisfactions and direct our anger and frustrations onto some nebulous villain, like The System.

Ron Paul himself does not seem angry, which is a great advantage in a presidential debate, but you can sense the old populist rage, suspicion and arcane ire coursing through his fan base.

A lot of historical work has been done on American populism by now, notably by the late, incisive Richard Hoftstadter, who explored the dark side of that movement. After him, it was impossible for later generations to swallow the standard, uncritical, textbook-bland view of populism as just another successful reform movement in a long succession of them in American history.

Professor Hofstadter exploded that myth by exploring populist literature, rhetoric and general paranoia. His “Age of Reform” was an almost encyclopedic recital of populist conspiracy theories, which featured the usual cast of suspects — Wall Street tycoons, British bankers, shadowy Illuminati and, inevitably, the Jews. (What would any halfway decent conspiracy theory be without us? It’s a Western tradition, and not just a Western one — as a brief survey of Islamic jihadism will illustrate.)

There is no longer a Populist Party that I know of, but populism itself is alive and deliriously well. One can hear its old delusions whenever Ron Paul speaks: The Constitution is being undermined by a self-serving elite. A once pure Republic existing in splendid isolation (talk about an ahistorical view of the American past!) has become mired in imperialist intrigues. We are being drawn into endless wars in order to further the ends of a small cabal of power-hungry plotters. And, of course, the whole American financial system is a fraud and swindle foisted on the American people by some deep, dark conspiracy.

The themes are dramatic even if they are now being laid out in the dull monotone of a Texas congressman who has been playing variations on them ever since he went into politics, if not before. His fantasies are in the grand tradition of 19th-century populists even if he lacks their fire. (The closest he comes to it is a kind of grumpy irritation.)

Dr. Paul is as American as a tintype, a reincarnation of a once familiar type — the money crank — who had a simple, single-cause explanation for any and all problems with the American economy. Namely, that a small, insidious group is manipulating the money supply.

It comes as no surprise to find that Ron Paul believes the Federal Reserve System is an illegal, unconstitutional and generally nefarious conspiracy. It goes with the mental territory he inhabits, and with what Professor Hofstadter described in a noteworthy essay as “The Paranoid Style in American Politics.”

James Kirchick of The New Republic recently dug up some of the stranger theories Dr. Paul used to peddle in the old “Ron Paul Political Report” and “Ron Paul Survival Report,” the kind of obscure little newsletters that always find a market among those who believe The End Is Near — and are eager to find somebody to blame for it.

Among the doc’s assertions: It was really the Israelis who were behind the first attack on the World Trade Center; Martin Luther King Jr. was some kind of pedophile; and the only reason the riots in Los Angeles over Rodney King’s beating could be contained was because black rioters stopped to “pick up their welfare checks.” Dr. Paul has tried to disassociate himself from this kind of shameful thing, which speaks well of him. He’s an honorable man who doubtless has repented of such junkthought by now. But that he should have been sucked into this hateful swirl in the first place does say something unsettling about his susceptibility to nuttism in general.

To any taxonomist of American radicalism, Ron Paul is a familiar type — genus Conspiracist, species Populist. He fits right in with a mentality that hasn’t changed all that much since Arkansas’ own great money crank, William “Coin” Harvey, was all the vogue in the 1890s. His “Coin’s Financial School,” at a mere 155 pages, may have been the most popular and influential American manifesto since Thomas Paine’s “Common Sense.” It overran the American South and West like a contagious fever.

Harvey came from a long American line: the village explainer. That’s the phrase Gertrude Stein used to sum up poor Ezra Pound, the crazed poet and another money crank. Alas, he had the misfortune to fall under Mussolini’s sway at a time when the United States was at war with Italy’s fascist regime and, like the village explainer he was, decided to broadcast his views.

Result: The poet would spend years as a mental patient at St. Elizabeth’s rest home, asylum and depository for embarrassing political cases. (It wasn’t just the Soviets who practiced political psychiatry.) Hospitalizing the eccentric — but scarcely insane — old poet seemed a more humane and less embarrassing way to deal with him than having to try him for treason.

Political stupidity, it was decided in his case, should not be a capital crime. At least for poets; the rest of us may be held responsible. What he was really guilty of was taking his populism too seriously. Ideas have consequences, especially in wartime.

American populism wasn’t just a reform movement in American history but a search for a conspiracy to blame for all of America’s — and the world’s — troubles. Ron Paul isn’t so much a libertarian as an hysterian able to say the most preposterous things in the dullest, calmest way. And there will always be good people, especially naive young people innocent of history’s context, attracted to simple explanations for complicated problems. That was the principal attraction of populism — and still is. When you start digging into the American psyche, Ron Paul becomes an instantly recognizable American type, and a disturbing one.

Cautionary notes: Single-cause theories may be easy enough to dismiss, but now and then one comes along and revolutionizes a whole field, the way Milton Friedman’s monetarism did today’s economics. His views are now as accepted as Keynesianism once was.

America is still full of village explainers even in these more urbanized times, and every garage seems to contain an amateur inventor who’s working away at a completely unworkable idea. But how do we know that one of them won’t turn out to be the next Bill Gates?

Back in the Thirties, there was a Ron Paul type out in California, a doctor named Francis E. Townsend, who came up with a screwy plan to give every American 60 years of age or older the then-grand sum of $200 a month on the condition that every last penny of it would have to be spent before the month was out.

The Townsend Plan became the inspiration for one of the simplest and most effective social programs in American history: Social Security. You just can never tell where a great idea will come from.

Also, while most populists were inflationists, whether of the Greenback or Free Silver brand, Dr. Paul is a deflationist of the goldbug variety, which is what an economy trying to stave off a recession doesn’t need just now.

A good argument could be made that a touch of inflation was just what the late-19th century American economy could have used to avoid its recurrent panics. While its economic theories may have been cockeyed, populism’s actual effect when it loosened the money supply may have been beneficial.

The moral of the story: Criticism of populism, like populism itself, can be oversimplified.